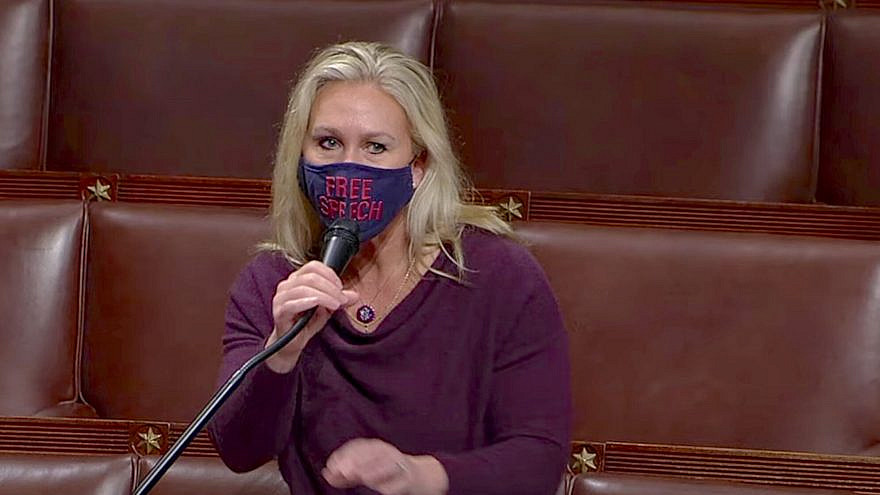 Rep. Marjorie Taylor Greene (R-Ga.) speaking to the House of Representatives ahead of a vote on whether or not to remove her from House committees. Source: Screenshot/C-Span.
Spread the word.
Help JNS grow!
Share now:

(June 15, 2021 / JNS) Weeks after comparing the wearing of face masks in the U.S. House of Representatives to the Holocaust in a podcast, Rep. Marjorie Taylor Greene (R-Ga.) publicly apologized for her remarks.

She did so in front of reporters outside the U.S. Capitol building on Monday after visiting the United States Holocaust Memorial Museum.

“I have made a mistake, and it’s really bothered me for a couple of weeks now. And so I definitely want to own it,” she said. “The Holocaust is—there’s nothing comparable to it. It happened and over 6 million Jewish people were murdered. More than that, there were not just Jewish people, but black people, Christians … even children. People that the Nazis didn’t believe were good enough or perfect enough.

“There are words that I have said, remarks that I’ve made, that I know are offensive and for that, I want to apologize.”

Greene, a freshman member of Congress, said in an interview with Christian Broadcasting Network’s David Brody that a rule by Speaker of the House Nancy Pelosi that House members must show proof of vaccination before entering the legislative chamber without a mask was akin to the Nazis’ marking the Jews with yellow Stars of David. It was those stars that marked them for death.

“We can look back at a time in history where people were told to wear a gold star, and they were definitely treated like second-class citizens, so much so that they were put in trains and taken to gas chambers in Nazi Germany,” Greene said at the time. “And this is exactly the type of abuse that Nancy Pelosi is talking about.”

Her remarks were widely criticized even by her Republican colleagues, including Majority Leader Kevin McCarthy (R-Calif.) and Senate Minority Leader Mitch McConnell (R-Ky.)

Jewish Rep. Brad Schneider (D-Ill.) is expected to introduce a resolution to censure Greene on the House floor this week, according to The Washington Post.

“Anti-Semitism is true hate,” she said. “And I saw that today at the Holocaust museum.”