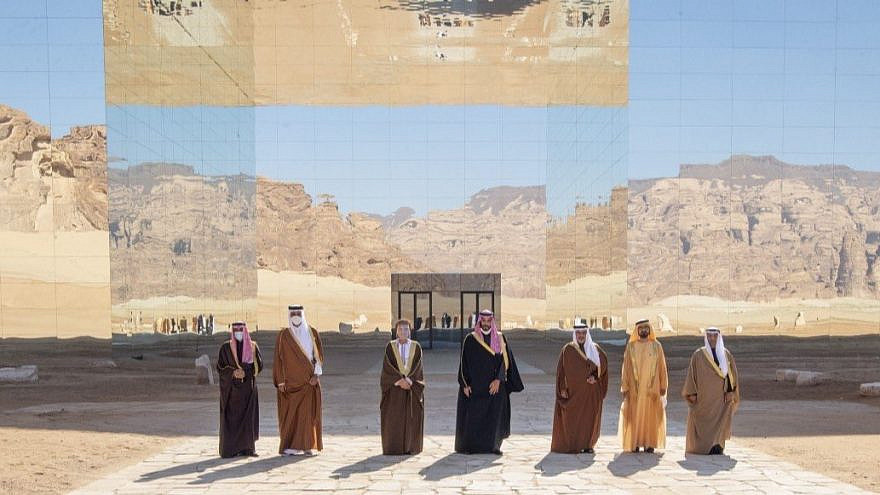 (January 7, 2021 / JNS) Saudi Arabia, Egypt, Bahrain and the United Arab Emirates ended their three-and-a-half-year blockade against Qatar on Tuesday—a move whose implications appear to have mixed ramifications on issues surrounding the Middle East, according to foreign-policy experts.

Saudi Arabia reopened its airspace, and its land and sea borders, to Qatar. The United Arab Emirates, Bahrain and Egypt lifted the embargo on Qatar, while Qatar agreed to abandon all lawsuits pertaining to the blockade, which the Gulf states enacted over their support for terrorism.

In a statement on Tuesday, U.S. Secretary of State Mike Pompeo struck an optimistic tone, stating that the United States is “encouraged by the breakthrough made with the Al-Ula Declaration today at the GCC [Gulf Cooperation Council] summit, which marks a positive step toward restoring Gulf and Arab unity.” (Egypt is not a member of the GCC.)

“We have long stressed that a truly united Gulf will bring added prosperity through the free flow of goods and services, and more security to its people,” said Pompeo. “We welcome the pledge to restore cooperation in military, economic, health, counter-corruption and cultural initiatives.”

Overall, Middle East and foreign-policy professionals seemed to view the breakthrough, which was brokered by the United States and Kuwait, with skepticism, as more of a negative than a positive.

“I’m skeptical that the end of the Qatar blockade means that Doha will give up on its partnership with the mullahs in Iran or will fundamentally change any of the other malign activities that so upset the Saudis, Emiratis and other Arab countries in the first place,” said Foundation for Defense of Democracies CEO Mark Dubowitz. “If it’s a first step towards aligning their policies more closely with their GCC [Gulf Cooperation Council] cousins, that would be a reason for optimism. But there has been no fundamental change in their behavior that should make one optimistic.”

Qatar has long been a maverick when it comes to Middle East. While the country hosts one of the largest U.S. airbases in the region, Al Udeid Air Base, which is the forward headquarters of U.S. Central Command, it has also pursued warm ties with Iran and been a harsh critic of Israel, especially through its Al Jazeera satellite TV station. Since the 2017 rift between Qatar and its neighbors, the oil-rich nation has grown closer to Iran and Turkey, which has alarmed the U.S. and its Arab Gulf allies.

The nation has also long been supportive of the Muslim Brotherhood, which is considered a terrorist organization by the UAE, Saudi Arabia, Bahrain and Egypt. Qatar has also backed Hamas, the Palestinian terror group that rules the Gaza Strip.

The countries behind the blockade issued 13 demands to Qatar that included cutting off ties to Iran and to terrorist groups such as Hezbollah, shuttering Al Jazeera and its affiliates and other news outlets funded by Qatar, and severing ties with the Turkish military inside Qatar.

Middle East analyst Irina Tsukerman warned of dire consequences from the lifting of the blockade—a move she called “a major mistake.”

“There has been no evidence that Qatar has made any compromises or acquiesced to any of the 13 demands set out in the beginning of the boycott imposed in 2017,” she said.

Thanks to the end of the blockade, said Tsukerman, Qatar will be able to facilitate the Gulf state’s smuggling of weapons and fighters “into East Saudi Arabia, where Iran is actively involved in radicalizing the local Shi’a population and through there to Islamist and terrorist cells all over the country.”

Benjamin Weil, director of the Project for Israel’s National Security at the Endowment for Middle East Truth (EMET), noted that “there are still some fundamental regional policy differences between the countries, particularly when it comes to Iran and the Muslim Brotherhood.”

Development is ‘significant but fragile’

Former U.S. Ambassador to the UAE Barbara Leaf told JNS that the development remains “significant but fragile” as “the core issues that divide the UAE and Qatar in particular, but also loom large for Egypt, “have not been resolved.”

“This is a mediation effort that has come close several times in the last year but has fallen apart each time,” she continued. “I don’t think it contributes directly to a more unified stance on Iran for the moment.”

Barbara Slavin, who leads the Atlantic Council’s Future Iran Initiative, called Saudi Arabia’s move to end its rift with Qatar “a gesture to the incoming Biden administration,” which is expected to take a hardline stance on Riyadh’s human-rights record and have disagreements with the kingdom on issues including Iran and the ongoing war in Yemen.

“I doubt we will see a sudden increase in cooperation among the GCC states, which have failed to even make their militaries compatible over the past 40 years, and which have divergent interests and relationships with external powers,” she said. “However, anything that lessens tension in the region should be welcomed, and let’s hope this leads to more diplomacy and fewer threats and acts of violence.”

‘New opportunities to deter a war’

National security analyst Anthony Cordesman remarked that the end of the blockade “gives the Arab Gulf states the first real opportunity they have had in years to create an effective regional deterrent to Iran.”

“It potentially revitalizes the Gulf Cooperation Council. It provides the opportunity to deploy integrated air and missile defenses, far more interoperable air forces and unified maritime defenses to deal with Iran’s growing air, missile and naval forces,” he continued. “It allows U.S. and European power projection forces to help create a fully integrated level of deterrence and defense, and means Iraq cannot pick and choose its targets in ways that exploit the divisions between Arab states.”

“More than that,” said Cordesman, “it not only provides new opportunities to deter a future war with Iran, but to make Iraq, Egypt and Jordan real security partners, and deal with extremist threats as well. It is only a first step towards reaching these goals, but it is a vital one.”

While experts acknowledged that although Iran will lose revenue from Qatari overflights, contrary to Cordesman’s take, the end of the blockade doesn’t necessarily make for a united front by the Gulf countries against the threat from Tehran.

“I don’t think it contributes directly to a more unified stance on Iran for the moment,” said Leaf.

Slavin said “as far as Iran is concerned, Qatar will maintain close ties because they share the world’s largest gas field and because Qatar is grateful for Iran’s help during the blockade. Iran will lose revenue from Qatari overflights but may gain another go-between with the Saudis.”

That revenue loss has been a goal of the Trump administration in accordance with its “maximum pressure” campaign against Iran that has included depriving the regime of any funds.

Qatar had been giving Iran $100 million annually to use its airspace due to the blockade, according to United Against Nuclear Iran policy director Jason Brodsky.

Brodsky said that while the end of the blockade “may be a step in the right direction of fostering unity within” the GCC “against “the Iranian threat, this doesn’t necessarily solve the core concerns that the United States, and its allies and partners, have as it relates to Doha’s international posture.”

For example, he said, “there have been recent allegations of funding originating in Qatar for Hezbollah, not to mention U.S. lawsuits alleging Qatari financing for Hamas and Palestinian Islamic Jihad. Thus, there are still many unresolved issues that will contribute to disunity moving forward.”

Weil noted that “there are rumors saying that America has encouraged Saudi Arabia and Egypt to reach an understanding with Qatar by inking a $760 million arms deal with the Saudis and a $100 million with the Egyptians.”

“I am certain that the Iranians are not thrilled with the Saudis acquiring advances systems and weapons from the United States,” he said.

“At the same time, Qatar, a close ally of Iran and a supporter of Hamas and Hezbollah, two terrorist organization, will now have easier air, land and sea access,” continued Weil, who added that “Israel benefited from the GCC boycott on Qatar since it created a deeper divide in the Arab League, preventing the countries from collaborating on anti-Israel policies.”

At the end of the day, said Tsukerman, “Qatar and Iran will take this step exactly as what it is—a sign of capitulation—and will benefit greatly from it.”

She added that Saudi Arabia “is losing out on leverage, whereas Qatar sees these events as a sign of impunity, and its growing influence in the region and in the West.”