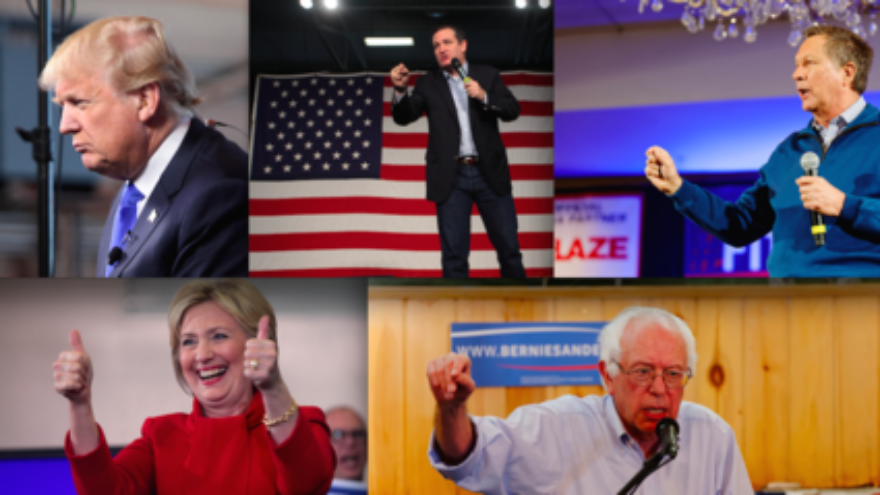 (April 18, 2016 / JNS) When it comes to projecting the Jewish vote in 2016, understanding demographics might lend some semblance of sanity to an election that most observers would compare to a roller coaster ride.

Against the backdrop of the unpredictable primary stretch and the possibility of a contested Republican convention, JNS.orgsurveyed Jewish demographic experts for their take on how American Jews might vote in the remaining primaries and in November’s general election.

How Jews vote and why it matters

While Jews represent just 2 percent of the American population, surveys indicate that more than 90 percent of Jews who are registered to vote make it to the polls, compared to 74 percent of all Americans. Additionally, in 2013, 70 percent of U.S. Jews were living in New York, California, Florida, New Jersey, Illinois, and Pennsylvania—states whose combined 167 electoral votes make up more than half of the 270 electoral votes a presidential candidate needs to win the election.

In 2013, the Pew Research Center’s “Portrait of Jewish Americans” survey showed that 70 percent of Jewish voters were Democrats, compared to 49 percent of the general American public. One exception, however, is Orthodox Jews. The Pew study said that 57 percent of Orthodox Jews identify or lean Republican, while 36 percent identify or lean Democrat. But Orthodox Jews represent “a very small part of the Jewish population, just 10 percent,” noted Dr. Steven M. Cohen, a research professor of Jewish social policy at Hebrew Union College – Jewish Institute of Religion (HUC-JIR).

Other Jewish groups likely leaning Republican are what Cohen calls “ethnic Jews”—those who are more “culturally conservative,” including immigrant Russian-speaking Jews, who “see a conservative political philosophy as most opposed to the government that oppressed them for decades.”

When did U.S. Jews become liberal?

“In the late 19th century, from roughly 1864 until roughly 1916, American Jews voted Republican in overwhelming numbers. We don’t have a lot of data to substantiate that…but what we do know allows us to make a judgment call,” said Dr. Steven Windmueller, a demographer from Hebrew Union College’s Zelikow School of Jewish Nonprofit Management.

Dr. Ira Sheskin, a demographer at the Sue and Leonard Miller Center for Contemporary Judaic Studies at the University of Miami, explained that “the nature of the parties does change over time” and that “back in the 1800s, Republicans and Democrats held different views than they do today.”

From 1916 onward, the Jewish vote went to the Democratic Party. By the time former president George H. W. Bush ran for re-election in 1992, he received only 16 percent of the Jewish vote, Sheskin noted.

Jews continued voting predominantly Democratic through President Barack Obama’s two campaigns. But while Obama garnered anywhere from 74 to 78 percent of the Jewish vote in 2008, depending on whose data is used, his Jewish support dropped to 69 percent in the 2012 election.

“Was that a reaction to some of [Obama’s] policies? His relationship with the government of Israel, or other issues? It’s difficult to say, but we think there has been some small trending over the last 15 to 20 years toward voting for more Republicans on the part of some Jews that are maybe historically voting Democratic,” Windmueller told JNS.org.

This growth in Jewish Republican votes might be attributed to younger Jews who don’t affiliate with a party or who register to identify as independents, although only 17 percent of Jews ages 18-29 identified as Republican in Pew’s 2013 survey. Single-issue voters who vote, for instance, exclusively on Israel and Middle East foreign policy, or the growth of America’s Orthodox Jewish population, are additional factors that may lead to more

Sheskin, however, cautions against reading too much into the aforementioned factors when it comes to the Jewish vote. He said the uptick in Jewish Republican voting had already started after the elder Bush’s 1992 campaign, when the sitting president won a particularly low portion (16 percent) of the Jewish vote. According to data provided by Sheskin, Jews voted for Republican presidential candidates at an average rate of 32 percent across the 1972-1988 elections, similar to the 30-percent Jewish support for the GOP’s Mitt Romney in 2012. The same data shows that across the 1992-2012 elections, Jews voted Republican at an average rate of 22 percent, meaning that Jewish support for the GOP is “still well below what it was in the 1970s and 1980s,” said Sheskin.

Why do Jews vote overwhelmingly Democratic?

Ahead of Passover, Dr. Leonard Saxe—director of the Cohen Center for Modern Jewish Studies and the Steinhardt Social Research Institute, both at Brandeis University—cites the holiday as the orienting story of Judaism that explains the Jewish voting mentality.

Jews, Saxe told JNS.org, “have always been a group concerned about the general social welfare, because we were the objects of discrimination and prejudice, the target of the horrific actions of the Nazis. We’ve always been social-liberal and that’s been associated in this country with the Democratic Party.”

Sheskin argued that the Republican Party has shifted a great deal to the right over the last 20 years. He said it used to be “possible to be kind of liberal on issues like birth control and abortion, and the death penalty, and then be conservative on economics and be a Republican. It is very difficult to do that today.”

Another reason Jews lean Democrat, he said, is that they “are very pro-science.” For example, many Jews support the scientific consensus on climate change and may dislike when Republican candidates commonly deflect that issue on the grounds that they aren’t scientists.

What does this mean for the primary and general elections?

Pew’s 2013 survey showed that 30 percent of Jewish voters described themselves as moderates. Saxe believes, therefore, that most Jewish voters are likely to support Hillary Clinton over Bernie Sanders.

Sanders—a Jew himself—may be alienating some Jewish voters with his critical stance on Israel’s actions during its 2014 war with Hamas. In a recent interview with the New York Daily News editorial board, Sanders said that Israel launched “indiscriminate” attacks against the residents of Gaza in 2014, and inflated the number of Palestinian civilian deaths in the war at least sevenfold to 10,000. The Sanders presidential campaign also hired Simone Zimmerman, an outspoken critic of Israeli government policies, as its Jewish outreach coordinator. The campaign later suspended Zimmerman over her profanity-laced social media posts about Israeli Prime Minister Benjamin Netanyahu.

HUC-JIR’s Cohen, however, said that Israel is generally not a major factor in most Jews’ voting decisions because “each political perspective sees its candidate as doing right by Israel.” Nevertheless, “if we had a presidential candidate, either Democrat or Republican, who came out and said, ‘I don’t think Israel should exist,’ I think that probably would determine a good portion of the Jewish vote,” Sheskin said.

Saxe does see a possibility among some independent or moderate Jewish voters to choose to vote in a Republican primary over a Democratic one because they don’t believe the candidates on the Democratic side are sufficiently supportive of Israel. But Saxe doesn’t believe that Jews “have had to face that question” yet.

Looking ahead to the Jewish vote in the general election, despite Ted Cruz’s staunch support for Israel, Cohen projected that “if it were a Cruz-Clinton competition, Cruz wouldn’t win out. Clinton is the more natural choice for most American Jews.”

When it comes to the fact that Sanders is Jewish, the demographic experts largely agree that his religion has little bearing on whether or not Jewish voters will cast their ballots for him.

Sanders’s Jewish identity, said Sheskin, “seems to be predicated on the fact that his parents were persecuted and had to leave Poland…His Jewish identity might play a bit more of a role if he was active in the Jewish community in some way.”

The Sanders campaign comes 16 years after Joe Lieberman, an Orthodox Jew, was the vice president on Al Gore’s ticket, creating what Windmueller recalls as a huge amount of Jewish communal conversation and concern regarding whether the Gore-Lieberman campaign would lead to anti-Semitism and if Lieberman’s presence on the ticket was a good or bad thing for American Jews. At the same time, Lieberman’s active Jewish life created more “excitement” for Jews than the Sanders campaign, said Windmueller.

“There was a whole degree of excitement about the Lieberman presence on a national ticket. We don’t see that happening…with Sanders,” he said.

Sanders’s religion could have theoretically been a selling point for Jewish voters, but “in some ways it makes his position on the Gaza war stand out even more starkly,” Saxe said.

“I don’t think [being Jewish] will necessarily help him, which is not to say that he won’t get a large Jewish vote,” he said.

Similarly, the experts agree that the fact that Donald Trump’s daughter Ivanka Trump is a convert to Judaism isn’t likely to motivate Jews to vote for her father, at least not any more than how Chelsea Clinton being married to a Jew would potentially convince Jewish voters to vote for her mother.

On the Republican side, the experts say it is much more difficult to determine how Jews feel about Donald Trump. In addition to his controversial statements on immigration, Muslims, and Mexico, which make him anathema to liberal voters, Trump initially said he intends to be “neutral” on the Israeli-Palestinian conflict. He later backtracked on that stance, saying he simply wants to appear neutral so that he can make a deal to settle the Israeli-Palestinian conflict.

“No one quite knows what Trump is or how to categorize him,” Sheskin said. Despite Trump’s recent speech to the AIPAC conference, which was perceived as strongly pro-Israel, Sheskin doesn’t “see how Trump could do anything that’s going to get him some reasonable percentage of the Jewish vote.”

While Cruz is projected to face an uphill climb among Jewish voters in the general election due to his conservative positions on social issues, there are fewer indicators for how Jewish voters might feel about Kasich. In New York, where there are large communities of Orthodox and Russian Jews, “we’re likely to see a very polarized [Jewish] electorate” in the state’s April 19 primary, Cohen said before the primary, though Sheskin predicted that most New York Jews would ultimately vote Democrat and for Clinton in the primary and general elections. Clinton and Trump won their respective parties’ New York primaries by significant margins on Tuesday, but statistics on the Jewish vote weren’t immediately available.

Saxe said that because a relatively small percentage of the U.S. population participates in the political process, “we haven’t had a pure test of what people really think,” but rather only “a test of what the people who are most active or feel most strongly think.”

Broadly speaking, many voters appear to feel torn about both parties’ candidates, a sentiment that echoes in the Jewish electorate.

“I spoke to a couple of [independent Jewish] voters in northern California….and they are struggling,” Windmueller said. “They don’t particularly care for Hillary, they don’t feel Bernie Sanders has much to offer because he’s so idealistic…and they’re really turned off by Trump and not comfortable with Cruz….I think you have a whole corps of Jewish voters, Republicans and some independents, and even maybe a few Democrats, who in a sense are holding out until they see what happens in Cleveland at the Republican convention in July.”