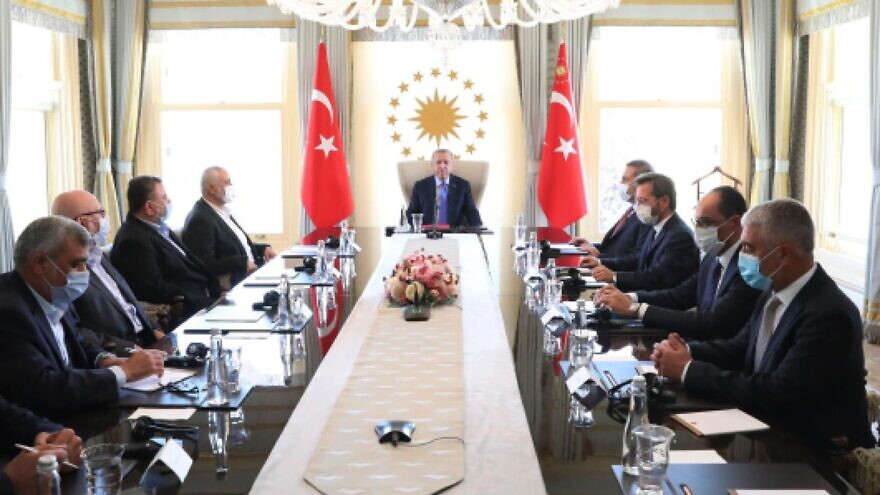 According to NBC News correspondent Raf Sanchez, who posted a photo of the meeting on Twitter, the delegation included Hamas deputy leader Saleh al-Arouri, a wanted terrorist with a $5 million bounty on his head.

In its profile on al-Arouri, the website Rewards for Justice writes that he “funds and directs Hamas military operations in the West Bank and has been linked to several terrorist attacks, hijackings and kidnappings.”

In 2014, al-Arouri announced Hamas’s responsibility for the June 12, 2014, terrorist attack that kidnapped and killed three Israeli teenagers in the West Bank, including dual U.S.-Israeli citizen Naftali Fraenkel. He publicly praised the murders as a ‘heroic operation.’ ”

It further states that “in September 2015, the U.S. Department of the Treasury designated al-Arouri as a Specially Designated Global Terrorist (SDGT) pursuant to Executive Order 13224, a move which imposed sanctions on his financial assets.”

Saturday’s meeting in Istanbul comes amid renewed Hamas rockets attacks on Israel, and in the wake of the U.S.-brokered normalization treaty between Israel and the United Arab Emirates, which the Palestinian Authority, Turkey and Iran strongly oppose.

Turkey maintains diplomatic relations with Israel, but the ties are tense, as the Islamist Turkish president pursues a foreign policy at odds with Israel and supports radical movements throughout the region.