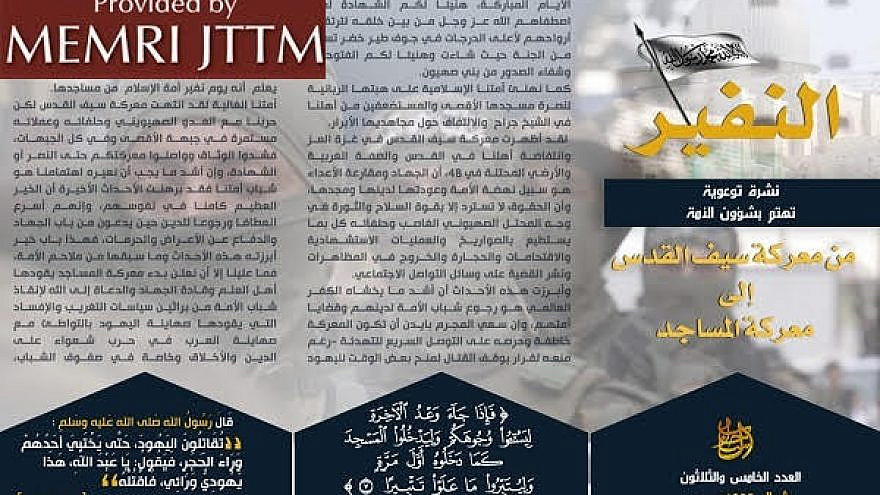 Al-Qaeda's central media outlet, “Al-Sahab,” published Issue 35 of its “Al-Nafir” bulletin in which it called on Muslims to carry out attacks against U.S. and Jewish interests. Credit: MEMRI.
Spread the word.
Help JNS grow!
Share now:

(June 7, 2021 / JNS) Al-Qaeda’s main media outlet published a call on Muslims to carry out attacks against U.S. and Jewish interests, as well as urged individuals to support the mujahideen in Palestine financially, with men and weapons, according to the Middle East Media Research Institute’s Jihad and Terrorism Threat Monitor (MEMRI-JTTM).

The media outlet, Al-Sahab, published the call in issue 35 of its Al-Nafir bulletin in which it praised those who rushed to “defend” the Al-Aqsa mosque on the Temple Mount in Jerusalem and the people of Sheikh Jarrah neighborhood in eastern Jerusalem, which was a center for Arab rioting and violence.

It stressed that “waging jihad and fighting against the enemies is the way to revive the ummah [‘Islamic nation’], and bring it back to its religion and glory.”

It further noted, according to the MEMRI-JTTM report shared exclusively with JNS, that “rights can only be restored by the might of the weapon and by revolting against the usurping Zionist occupier and its allies [when] each one does what he can, [whether] launching rockets, [carrying out] martyrdom operations, [perpetrating] storming attacks, throwing rocks, taking part in demonstrations and promoting the issue on social-media platforms.”

The Al-Qaeda publication then condemned U.S. President Joe Biden, describing him as “criminal” and accusing him of “rejecting” an earlier ceasefire resolution “to give the Jews more time to spill blood and destroy properties.”

“In the name of Allah, we would be sinning if we did not take part in the jihad of our people in Palestine … we call on all the mujahideen to take part in the ‘Jerusalem will not be Judaized’ raids, each one doing what he can, until he attains victory or martyrdom,” it stated.