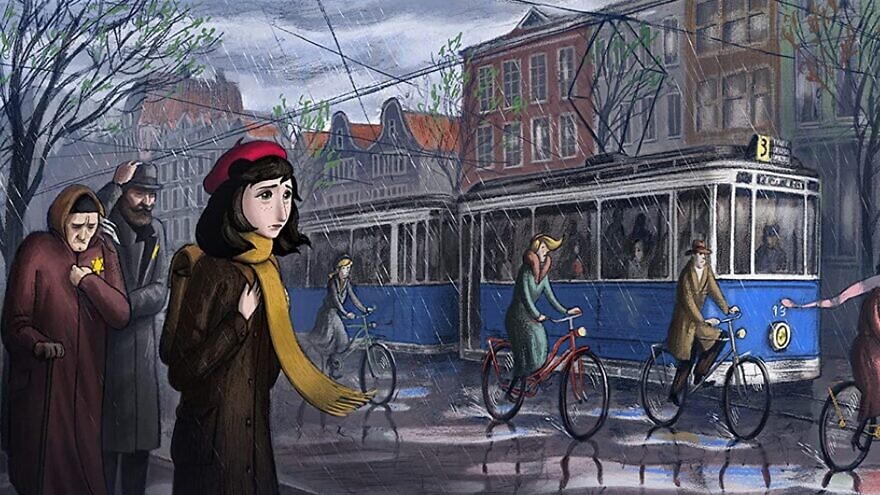 A scene from the film “Where Is Anne Frank?” Source: Screenshot/IMDB.
Spread the word.
Help JNS grow!
Share now:

(July 20, 2021 / JNS) The first animated film based on “The Diary of Anne Frank” debuted at the Cannes Film Festival to positive reviews from film critics, reported Deutsche Welle.

“Where is Anne Frank?” which premiered last week, revolves around a character named Kitty, Frank’s imaginary friend and alter-ego to whom she dedicated her diary.

The film is set in present-day Amsterdam and across Western Europe, as Kitty embarks on a journey to find Frank by referencing the latter’s diary. Along the way, she meets other youngsters who are fleeing conflict.

“That reminds Kitty of Anne and the fact that Anne did not have an opportunity to flee during her relatively short time in hiding,” explained the film’s Israeli director Ari Folman, who was nominated for an Oscar for 2008’s “Waltz With Bashir” and is the child of Auschwitz survivors.

“This experience turns Kitty into an activist,” he added. “At the same time, she realizes her powers to promote a movement for children’s rights.”

The Anne Frank Fonds Basel, which was founded by Anne’s father Otto Frank after World War II, approached Folman eight years ago with the idea of making an animated movie. The film’s artistic director, Lena Grubman, said the hope was that animation would make Frank’s story “more accessible” to a younger generation.

The film also aims to draw a link between the Holocaust, discrimination and anti-Semitism, according to Deutsche Welle.

Producer Jani Thiltges said “today, we see populism, right-wing extremism, even fascism, and definitely racism and xenophobia in various countries. I don’t believe a film can change anything, but I believe it’s important that, as filmmakers, we do everything to fulfill our hope of films playing a part in reintroducing a different mental and political attitude.”