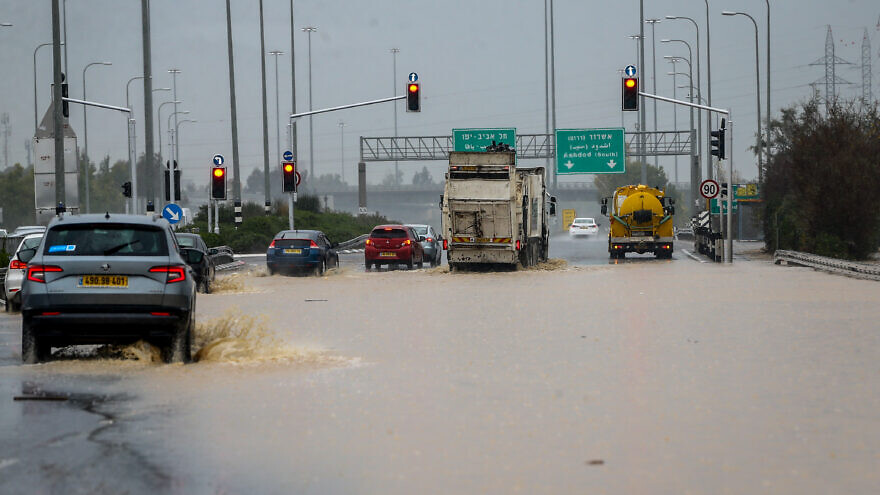 (January 9, 2020 / JNS) Torrential downpours have caused the deaths of at least seven people in Israel since the beginning of the month, as well as flooding in several major cities.

The northern city of Nahariya has been hit particularly hard by the current storm system, with military vehicles and tractors being used to evacuate trapped residents, including some 100 elementary-school students whose school was surrounded by water, making it impossible for parents to reach them, according to Israel’s Channel 12. The nearby Ga’aton River was reportedly filled to capacity, leaving runoff no place to go.

According to police, Moti Ben-Shabbat, 38, was swept away by floodwaters as he attempted to rescue the occupants of an overturned car in Nahariya. His body was found following searches by emergency services. The vehicle’s occupants were unharmed, according to the police. Ben-Shabbat was the seventh weather-related casualty in recent weeks.

Last week, Stav Harari and Dean Shoshani, both 25, drowned in Tel Aviv after getting trapped in a flooded elevator. On Sunday, Eran Herrnstadt, 72, was found dead in his vehicle in  Binyamina after having been caught in a flash flood, according to Ma’ariv. Rescue workers pronounced him dead at the scene.

The body of Ali Agbaria, 47, was found in a flooded stream in northern Israel following a search of the area, police reported on Monday. At least two others have been discovered since then, though the names have not yet been released.

Over the past 24 hours, the Sea of Galilee, or Kinneret, has risen by 23 centimeters; as of Jan. 6, the sea had risen 51 centimeters since the start of the rainy season in October.

The storm system is expected to drop significant precipitation on already flooded Ashkelon, Ashdod and Haifa, as well as on Tel Aviv.

Rains are expected to quiet down on Friday, before drying up on Saturday.

Police and rescue services will remain on high alert until the weather improves.