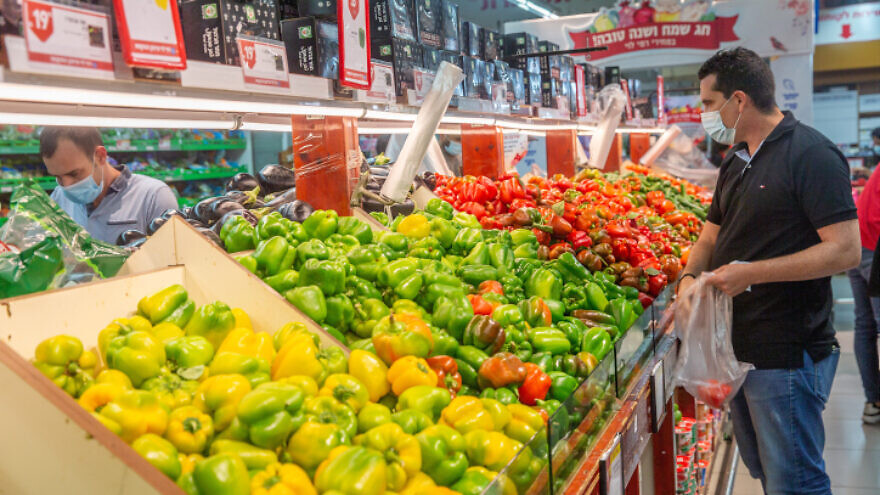 Israelis stock up on groceries at the Rami Levy supermarket in Modi'in ahead of a COVID-19 lockdown on Sept. 24, 2020. Photo by Yossi Aloni/Flash90.
Spread the word.
Help JNS grow!
Share now:

(November 15, 2020 / JNS) An average Israeli family discards NIS 3,300 ($968) worth of food per year, equivalent to a month-and-a-half of household food expenditures, according to a report released last week.

According to the 5th National Food Waste and Rescue Report from Israel’s Environmental Protection Ministry and the food-rescue organization Leket Israel, written and published by business consulting firm BDO, food waste accounts for about a third of all household waste in Israel. And the total direct external economic cost for treating garbage originating from food waste in Israel in 2019 was approximately NIS 1.2 billion ($352 million).

The impact of this waste of resources on the economy is significant, “but it doesn’t have to be this way,” said Environmental Protection Minister Gila Gamliel.

“Now, during this global health pandemic and economic crisis, it is incumbent upon us to save these resources, which can also help weaker populations,” she said. “Our office is currently formulating a waste strategy that will include the reduction of waste at the source, especially food waste. We will also continue to promote policies that will encourage the reduction of food waste and its impact on the environment.”

According to BDO estimates, COVID-19 will cause an additional 145,000 people in Israel to become food insecure and will exacerbate food insecurity for the 1.87 million people who were already suffering before the pandemic.

Leket Israel CEO Gidi Kroch said that, in view of the pandemic and findings of the Food Waste and Rescue Report, “It is more critical than ever to adopt food rescue as a national government policy to address welfare, the environment, health and the economy.”

Food rescue, he explained, “contributes to reducing food insecurity for vulnerable populations for one-third of the cost, increases the GDP and economic productivity, minimizes societal gaps, lowers the cost of living and better utilizes the scarce environmental resources.”