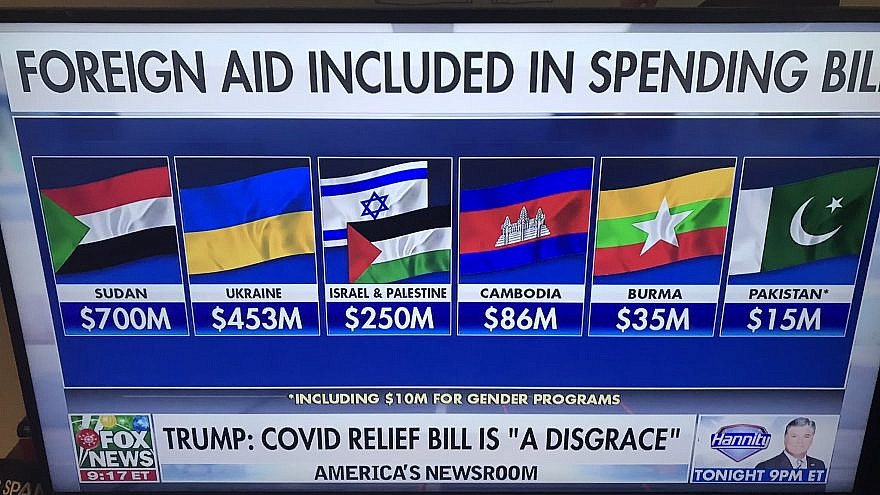 A Dec. 23 graphic on Fox News showed “Palestine” as a country even though it is not an actual nation. Credit: Jackson Richman/JNS.
Spread the word.
Help JNS grow!
Share now:

(December 29, 2020 / JNS) A graphic on Fox News last week showed “Palestine” as a country, despite it not being an independent nation.

The graphic appeared during the Dec. 23 broadcast of “America’s Newsroom” during a segment about U.S. President Donald Trump complaining about foreign aid in the legislative package Congress passed this week that included $1.4 trillion to fund the government and around $900 billion in COVID relief.

Fox News did not respond to a request for comment.

A similar error occurred in April when an MSNBC graphic showed “Palestine” in a rolling list of countries.

While the “State of Palestine” is recognized by some 138 countries and has the status as a non-member observer state of the United Nations, there does not exist a sovereign independent Palestinian state.

The Palestinian Authority is an interim Palestinian government established under the Oslo Accords, which its final status was left for future negotiations between Israel and the Palestinians. Currently, the P.A. has control over portions of the West Bank, known as Areas A and B, while the terrorist group Hamas controls the Gaza Strip after it ousted the P.A. from the coastal enclave in 2007.

During his remarks, Trump lamented U.S. assistance allocated toward certain countries, referring to more than $85.5 million for Cambodia, more than $134 million for Burma, $1.3 billion for Egypt and more than $505 million for Belize, Costa Rica, El Salvador, Guatemala, Honduras, Nicaragua and Panama. He also complained about the $25 million allocated for democracy and gender programs in Pakistan.

However, he did not mention U.S. assistance to Israel or the $250 million allocated over five years to expand coexistence between Arabs and Israelis, in addition to peacebuilding programs in the region and to support projects to strengthen the Palestinian economy. None of the $250 million can go to the Palestinian Authority in accordance with the Taylor Force Act, which prohibits funding from going to including, but not limited to, the P.A. or any individual or group the secretary of state determines to be involved in or advocating terrorist activity.

On Sunday night, Trump signed the omnibus spending bill into law after a significant delay but before a government shutdown were to take place.