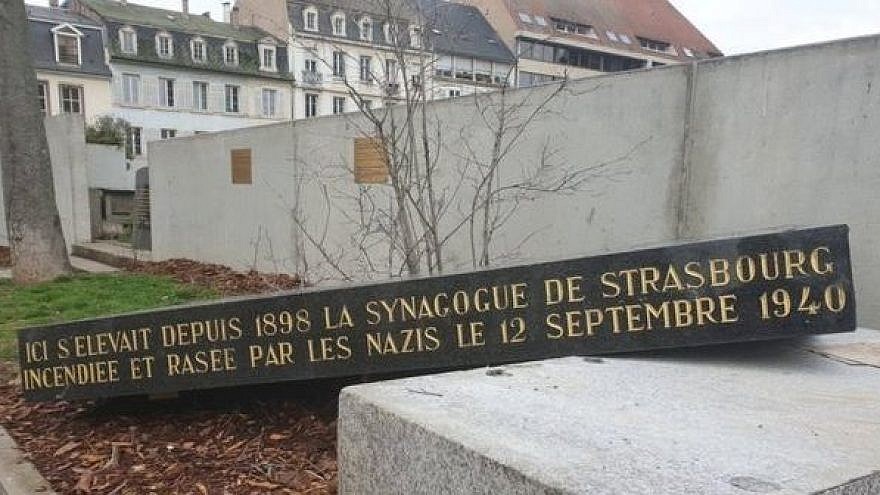 A memorial stone at the site of an old Jewish synagogue in the French city of Strasbourg was vandalized, following the Feb. 19, 2019 discovery of swastikas on 80 gravestones in a Jewish cemetery in the village of Quatzenheim, also near the border with Germany, March 2019. Credit: EJP.
Spread the word.
Help JNS grow!
Share now:

(December 5, 2019 / JNS) French Interior Minister Christophe Castaner announced on Wednesday that following the mass desecration of graves at a Jewish cemetery in Strasbourg, the country has decided to open a national bureau to counter hate crimes.

A total of 107 graves in the cemetery were marking with swastikas and other anti-Semitic graffiti.

The vandalism took place just hours after a similar one in the nearby village of Schaffhouse-sur-Zorn, where anti-Jewish inscriptions were found. Last week, anti-Semitic tags were drawn on the walls of the town hall in Rohr, not far from Westhoffen. Jewish officials said one of the slogans in the Rohr attack appeared to refer to the Jewish cemetery in Westhoffen, BBC reported.

Also earlier this year additional Jewish graves had been vandalized. The discovery of swastikas on 80 gravestones in a Jewish cemetery in the village of Quatzenheim, also near the border with Germany, was discovered on Feb. 19.

French Interior Minister Christophe Castaner, on a visit to the cemetery on Wednesday, said the attack was “an expression of pure hatred” and announced the creation of police taskforce against hate. France’s President Emmanuel Macron said the country will fight anti-Semitism “until our dead can sleep in peace.”

The new office is to be part of France’s gendarmerie and will be charged with investigating anti-Semitic, anti-Muslim and anti-Christian acts, said Castaner.

On Tuesday, France’s National Assembly in Paris passed a nonbinding resolution stating that anti-Zionism is anti-Semitism and called on countries to adopt the International Holocaust Remembrance Alliance’s definition of anti-Semitism.