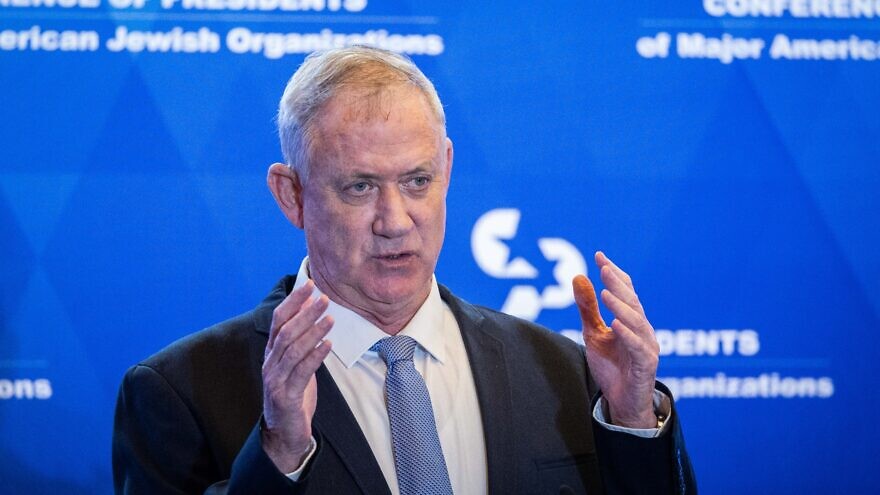 (February 22, 2022 / JNS) Israeli Defense Minister Benny Gantz warned on Tuesday that the international community “must be ready to take defensive and offensive actions … at any time,” as world powers negotiate a new nuclear deal in Vienna with Iran.

Gantz said the international community has the means to apply severe pressure on Iran, “regardless of whether a nuclear agreement is reached.”

He made his remarks to a delegation of American leaders in Israel with the Conference of Presidents of Major American Jewish Organizations. They come just days after Gantz met with world leaders, including U.S. Vice President Kamala Harris, at the recent Munich Conference in Germany.

Gantz suggested that international powers seem fully aligned on a return to a nuclear deal with Iran, despite the dangers such a deal poses not only to Israel but to the entire world.

He criticized world leaders for caving toward Iranian demands and lifting sanctions without gaining much in return. “I would hate to see the world strategically bent before the Iranian program,” he said.

He also emphasized that the global community has “the means as a community to pressure Iran, regardless of whether a nuclear agreement is reached.” He said that even if leaders are intent on signing another deal, pressure placed on Tehran “will end up bringing a better deal.”

“I hope that a deal, if it is reached, will be better than it looks like right now,” he said.

At the same time, despite his pessimism regarding the conclusion of the talks, Gantz noted that a deal does not necessarily tie Israel’s hands.

“A nuclear deal, if signed with Iran, does not mark the end of the road,” he stated. “It opens the door to important actions that must be taken.”

Such actions may become necessary as a “means to stopping the development of ballistic missiles capable of carrying nuclear weapons,” he said.

Israeli leaders have decided not to engage in a war of words with American leaders over the negotiations. “It won’t help me to criticize,” said Gantz. “However, it is my duty to prepare the IDF [Israel Defense Forces] and the security establishment of Israel to be ready to act, when and if needed at any given time, in the present and future. Israel will defend its people at any time when it feels it needs to do so.”