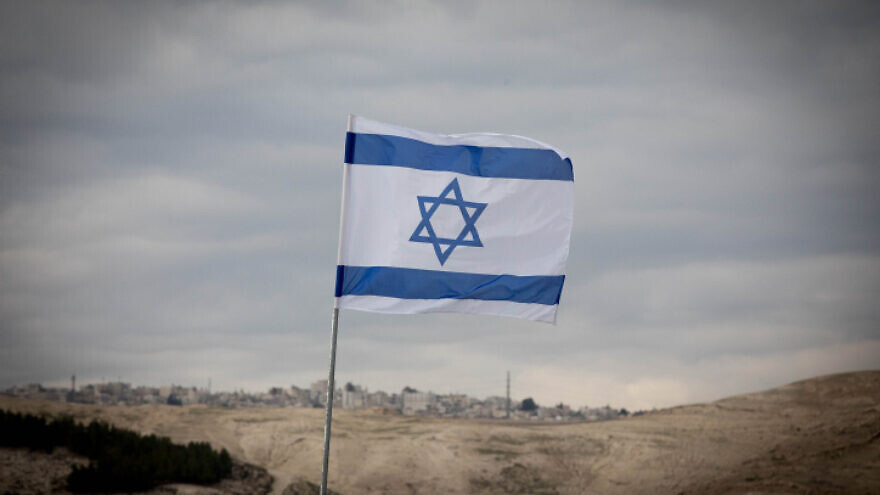 View of the Israeli flag and the area known as E1 on Jan. 2, 2017. Photo by Yonatan Sindel/Flash90.
Republish this article
601 WORDS
Spread the word.
Help JNS grow!
Share now:

(February 10, 2022 / JNS) Israeli Prime Minister Naftali Bennett and Defense Minister Benny Gantz have reportedly ordered the Civil Administration in Judea and Samaria’s higher planning council to halt discussions on the authorization of construction to connect the city of Ma’ale Adumim to Jerusalem via the E1 corridor.

A recent article in Israeli daily Israel Hayom cited pressure on the prime minister and defense minister from the left-wing Meretz Party, currently a member of the fragile government coalition, along with opposition from the Biden Administration, to freeze the project.

The decision to build in E1—a stretch of mountainous terrain around 4.5 miles long between the two cities and within the municipal boundary of Ma’ale Adumim—had received support from governments both on the left and the right of the political spectrum, beginning with former Prime Minister Yitzhak Rabin, who initiated the plan in 1995.

However, due to international pressure, each subsequent Israeli government failed to grant official approval of the project, thus preventing it from being actualized.

Ma’ale Adumim Mayor Benny Kashriel has expressed concern that E1 construction was taken off the council’s agenda, and has called on Bennett and Gantz to allow the discussion on building approvals to continue.

He told JNS, “After years of a building freeze in E1 when we finally started moving on the path towards the approval of [building] plans, this intervention is unacceptable.”

“We demand that the mandate be returned to the higher planning council to allow them to continue the procedure of hearing from both those for and against the plan until the plan is brought to the state for approval,” he said.

According to Israel Hayom, construction had been planned for roughly 3,000 acres of largely government-owned land and was to include some 3,500 housing units.

Those opposed to construction claim that the building of Jewish homes in that area would prevent the possibility of the creation of a contiguous Palestinian state in a future peace deal. Kashriel denied that building in E1 would cut off Arab continuity.

The area is currently barren of a Jewish presence aside from a large Israeli police station on one of its hilltops, along with multiple unauthorized Arab and Bedouin dwellings, including the illegal village of Khan al-Ahmar, whose evacuation has been pushed off repeatedly by several Israeli governments, despite a High Court of Justice order to carry it out.

A spokesperson from the prime minister’s office told JNS that they would not comment on the subject. The defense ministry spokesperson also didn’t respond.

‘It never received a green light’

In remarks to JNS, Meretz Knesset member Mossi Raz took credit for having E1 pulled from the planning council’s agenda.

“You should remember that while this plan has existed for around 30 years, it never received a green light,” he said.

As to why his party is against building in E1, despite the fact that connecting Ma’ale Adumim to Jerusalem is well within the realm of consensus, Raz replied that “building in E1 would change the situation on the ground. It is a waste of land, a violation of international law and a real risk to the possibility of a two-state solution.”

The Binyamin Regional Council, part of Judea and Samaria, whose jurisdiction borders the E1 area to its north and its east, blasted the directive to halt talks on the planned construction.

Binyamin Regional Council chairman Israel Gantz told JNS, “The decision to cancel construction between Jerusalem and Ma’ale Adumim causes tremendous strategic damage to the State of Israel. The cancellation of the plan weakens Israeli sovereignty in Jerusalem and in all of Israel.”