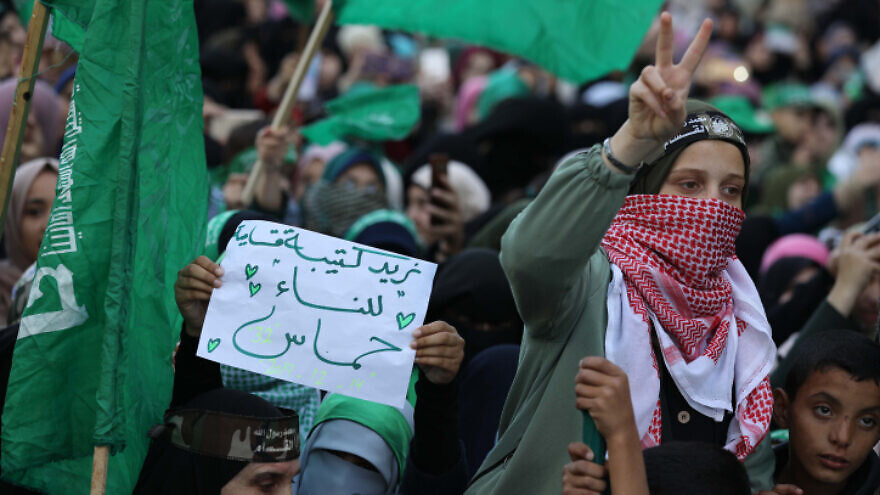 (December 15, 2019 / JNS) A senior Hamas leader warned on Saturday that his organization will “draw new equations” if Israel does not ease restrictions on the crossings into the Gaza Strip.

At an event in Gaza marking 32 years since the formation of the terrorist entity and attended by tens of thousands, senior Hamas political leader Osama al-Mazini said: “The enemy must understand that we will draw new equations if the siege is not lifted.”

The crossings between Gaza and Israel have been under tight Israeli control since Hamas seized power in 2007, however, the coastal territory also shares a border with Egypt.

Israel has argued that Hamas engages in numerous illegal imports, including of illicit weapons and bomb-making equipment, which necessitates strict supervision of the crossings.

At the rally, Mazini claimed that Hamas had made dozens of efforts to reconcile with the Palestinian Authority since 2007, when Hamas seized control of Gaza and killed Fatah supporters, booting out forces loyal to P.A. leader Mahmoud Abbas.

Hamas has also called for elections in the P.A., which haven’t been held since 2006.

At another Hamas anniversary rally, on Friday, Hamas politburo member Fathi Hammad reportedly said, “Israeli soldiers won’t see the light until our prisoners see the light,” Israel’s Channel 12 reported. Hammad was referring to Israeli citizens Avraham Abera Mengistu and Hishal al-Sayed, who entered Gaza in 2014-2015 and have been held there since, and also to fallen Israeli soldiers Hadar Goldin and Oron Shaul, whose bodies have been held by Hamas since their deaths in the 2014 Gaza war.

Mazini was personally involved in a highly controversial prisoner swap orchestrated by Israeli Prime Minister Benjamin Netanyahu in 2011, in which 1,027 convicted Palestinian terrorist were exchanged for captive Israeli soldier Gilad Schalit, who was kidnapped in a cross-border raid by Hamas in 2006.

Ahead of border riots on Friday, Israel Defense Forces Chief of Staff Aviv Kochavi said Israel had a “unique opportunity” to reach a long-term ceasefire with terror groups in Gaza, and met with border community mayors to discuss the possibility.