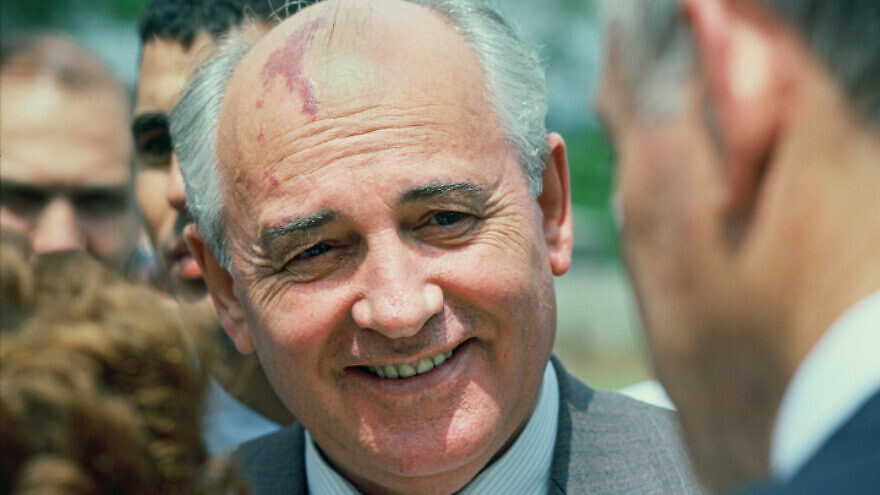 Mikhail Gorbachev, Russian and former Soviet politician. He was the eighth and last leader of the Soviet Union, having been General Secretary of the Communist Party of the Soviet Union from 1985 until 1991. Photo by Moshe Shai/Flash90.
Spread the word.
Help JNS grow!
Share now:

“Mikhail Gorbachev was one of the 20th century’s most extraordinary figures,” Herzog said in a statement. “He was a brave and visionary leader, who shaped our world in ways previously thought unimaginable. I was proud to meet him during his 1992 visit to Israel. Heartfelt condolences to his family and friends.”

Lapid issued a statement saying that “Mikhail Gorbachev, the last leader of the Soviet Union, passed away yesterday at the age of 91. He was a brave leader and great statesman, who contributed greatly to the rehabilitation of relations between his country and Israel, and opened the gates of the Soviet Union for the great wave of Jewish immigration to Israel in the 1990s.”

Russia’s Central Clinical Hospital in Moscow said in a statement on Tuesday that “Gorbachev passed away tonight after a serious and protracted disease.”

Gorbachev was instrumental in helping to end the Cold War between the Soviet Union and the United States without bloodshed but failed to prevent the Soviet Union from collapsing, Reuters noted in a report on Tuesday.

He secured armament reduction treaties with the U.S. and alliances with Western powers to lift the Iron Curtain that had divided Europe since World War II and bring Germany back together, the report said.

However, his internal reforms contributed to the Soviet Union’s demise, which Russian President Vladimir Putin has described as the “biggest geopolitical calamity” of the 20th century.

Putin expressed “his deepest condolences” at the news of Gorbachev’s death, Kremlin spokesman Dmitry Peskov told the Russian news agency Interfax. “Tomorrow, he [Putin] will send a telegram of condolences to his family and friends.”