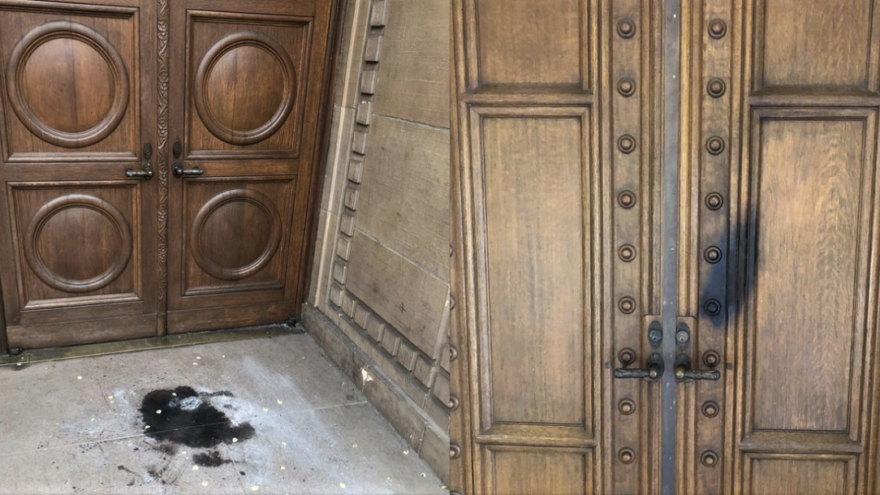 A fire and anti-Semitic graffiti were discovered outside the historic Congregation Beth Israel in Portland, Ore., on May 2, 2022. Source: Screenshot.
Spread the word.
Help JNS grow!
Share now:

(May 3, 2022 / JNS) Police and other law-enforcement officials are investigating a fire and anti-Semitic graffiti discovered on Monday outside a historical synagogue in Portland, Ore.

Congregation Beth Israel, which was completed in 1928 and is on the National Registry of Historic Places, was not significantly damaged, though scorch marks from the fire could be seen outside the building, both on the ground and on a door. According to local media reports, the words “Die Juden” were spraypainted outside as well.

In a letter to congregants posted on Facebook late Monday night, Rabbi Michael Z. Cahana said: “  … last night our historic sanctuary was marked with a hateful anti-Semitic slogan. There was also minor fire damage, which is something we have seen before. However, having this Nazi referenced statement spray-painted in yellow on our building, just a few days after we commemorated Yom Hashoah pains my heart. …

“Thank G-d, no one was hurt in last night’s incident and the physical damage to our campus is minimal. But the damage to our sense of safety is harmed. For that, we will work with the police, the FBI and other law-enforcement agencies to apprehend those responsible and to ensure this incident is not repeated,” he wrote.

“We will not be deterred,” he continued. “We will not be made to feel unsafe in our own house of worship. We are not the slaves of Egypt but a free people, confident and sure. That is the best response to hatred in the past and in the present.”

Sen. Ron Wyden (D-Ore.), who is a member of the congregation, tweeted: “Hate speech and vandalism must never be allowed to terrorize Portland or any community. I stand with Rabbi Cahana and our entire synagogue by adding my voice to his when he says we all must be vigilant against these attacks.”

According to the latest Audit of Antisemitism from the Anti-Defamation League, 24 incidents of anti-Semitism were recorded in Oregon in 2021 up from 19 the year before.