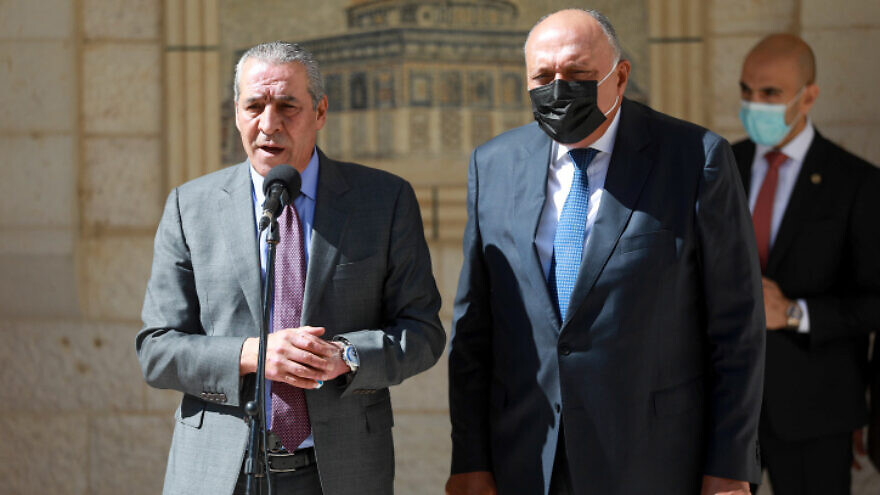 (June 14, 2022 / Jerusalem Center for Public Affairs) Israeli and U.S. officials are watching Palestinian Authority chairman Mahmoud Abbas’ affairs with concern. Senior Fatah officials report that something is happening to the 86-year-old Abbas. He has slowed his activity and cut back his meetings, participating only in the important ones while leaving the others to his confidant Hussein al-Sheikh.

On Saturday, June 11, 2022, Abbas hosted a U.S. delegation headed by Barbara Leaf, Assistant Secretary of State for Near Eastern Affairs, who came to lay the groundwork for President Joe Biden’s planned visit to the region next month. To Leaf, Abbas threatened, again, to suspend ties and security coordination with Israel. In addition, he demanded that the U.S. administration reopen the consulate in Jerusalem and the PLO office in Washington, and delist the Palestine Liberation organization (PLO) as a terror group.

Senior PLO official Hussein al-Sheikh, a confidant of Abbas and currently the leading candidate to succeed him until elections are held in the P.A.-controlled territories, is gradually assuming Abbas’s duties.

Last week, al-Sheikh, assuming the role held by the late Saeb Erekat, met with foreign consuls and U.S. envoy Hady Amr, with whom he discussed the P.A.’s demands of the U.S. administration.

After Abbas’s June 11 meeting with the U.S. delegation led by Leaf, al-Sheikh held a detailed discussion with the group. According to the P.A.’s official WAFA news agency, the Palestinian official expressed a gamut of demands:

“I stressed the necessity of reopening the U.S consulate in East Jerusalem and removing the PLO from the lists of terrorism in accordance with the unfair congressional laws against the Palestinian people, and talked about the economic aspects and the need to resume assistance to the Palestinian Authority, as well as unilateral measures that would undermine the two-state solution and peace opportunities, especially in light of the global financial crisis, especially the financial crisis in the PA due to the occupation’s withholding of our money from taxes owed to us.”

A leak to the BBC’s Arabic channel over the weekend that Abbas had hastily been taken to hospital and had transferred some of his powers to al-Sheikh, was no coincidence. Senior Fatah officials say this “fake news” was aimed at undermining the close ties between Abbas and his trusted ally. The report was staunchly denied by the P.A., and the BBC channel had to delete it from its website.

Al-Sheikh, for his part, is not resting on his laurels. Since Abbas authorized him two weeks ago to assume the role of secretary-general of the PLO Executive Committee, he has been acting energetically on several fronts to bolster his status as Abbas’s possible successor.

Al-Sheikh is doing all he can to remain the most auspicious candidate to succeed Abbas as P.A. and Fatah chairman. Senior Fatah officials say it was he who deferred the Eighth Fatah Conference to an unknown date, seeking to prevent the election of senior Fatah officials to key positions that would enable them to challenge him in the succession battle.

Al-Sheikh’s main rival is Fatah Secretary-General Jibril Rajoub, who seeks the post of the organization’s deputy chairman in place of Mahmoud al-Aloul.

The Lebanese newspaper Al-Akhbar reported on June 6, 2022, that sharp disagreements between senior members of the Fatah Central Committee had begun to imperil the movement’s future. Most of the Fatah top brass oppose al-Sheikh as their future leader.

Other senior Fatah figures expressed chagrin over Abbas’s handling of the movement’s affairs and the performance of P.A. Prime Minister Mohammad Shtayyeh’s government.

There is intense anger over Abbas’s designation of al-Sheikh as Executive Committee secretary-general without a process of internal elections as PLO bylaws require.

Senior Fatah officials say this damages the movement’s popularity and caused its defeat in internal elections for several West Bank institutions, most notably the Student Council of Birzeit University.

Al-Sheikh’s reputation in the Palestinian street has also been hit hard in recent years by reports in Palestinian social media and Israeli media charging him with corruption and sexual harassment.

Senior Fatah officials are competing to succeed Abbas. Most prominent among them is Deputy Chairman Mahmoud al-Aloul, the oldest aspirant and part of the organization’s founding generation. Also in the running is Secretary-General Rajoub. Both men would like to see a quick convening of the Eighth Fatah Conference, which, they believe, would further empower them in the succession battle.

In light of these power struggles, however, al-Sheikh convinced Abbas to postpone the conference to an unspecified later date.

Al-Sheikh has been working for months to improve his ties with the Egyptian and Jordanian leaders and win their support in the succession battle. A very seasoned Palestinian politician, he is known to many as the “fox of Fatah.”

Recently Al-Sheikh met with Egyptian and Jordanian officials, and accompanied Abbas’s visit to Egypt and Jordan.

Sources close to al-Sheikh say that before his PLO Executive Committee appointment, Abbas consulted with Egyptian President Abdel Fattah el-Sisi and Jordan’s King Abdullah about the possibility of al-Sheikh replacing Saeb Erekat. The latter, who died of COVID-19, had been the Executive Committee’s secretary-general and head of the negotiating team with Israel.

When the two Arab leaders did not express opposition, Abbas began transferring some of Erekat’s powers to al-Sheikh.

Another rival to al-Sheikh for the Fatah leadership is Marwan Barghouti, who is serving five life sentences in Israel for the murder of Israelis. Barghouti regards himself as Abbas’s natural successor, and in Palestinian public opinion surveys, he is out in front as the next P.A. chairman.

Fatah sources claim, however, that Israel promised al-Sheikh that after Abbas’s death, Barghouti would not be freed from prison, thereby clearing the path for al-Sheikh to take control of Fatah.

The Israeli defense establishment fears that Barghouti, who was a leader of the Second Intifada, would reignite the armed struggle against Israel.

Al-Sheikh, in any case, faces a huge challenge and is racing against time to shore up his status before Abbas leaves the political stage. Al-Sheikh is getting help from his political ally General Majid Freij, who is leading an effort to oust Prime Minister Shtayyeh and thereby boost al-Sheikh’s influence.

Abbas supports al-Sheikh, who has become his protégé. In his role as head of civil affairs, al-Sheikh is in charge of the tax revenues that Israel transfers to the P.A. each month, entry permits to Israel and VIP certificates for senior P.A. officials–affording him great power within the PLO and the P.A., as well as ways to buy political loyalty.

However, al-Sheikh does not enjoy great support in the divided Fatah movement. Once Abbas leaves the political arena, he will face a serious problem because the P.A. chairman has been the source of his power.

In Gaza, al-Sheikh is seen as responsible for the sanctions on the enclave, and all the factions oppose his becoming Abbas’s successor as P.A. chief.

The rumor mill on Abbas’s death

Israeli security officials are watching with concern the efforts by senior Fatah officials to undermine the process of turning al-Sheikh into Abbas’s temporary successor. Not only are al-Sheikh’s rivals building their power by distributing hundreds of weapons to their militias in Judea and Samaria, but lately, have also spread fake news about the 86-year-old P.A. chairman’s health in the territories’ social media, as mentioned above. These Fatah officials hope to drive a wedge between Abbas and al-Sheikh by creating the false impression that al-Sheikh is trying to “bury” Abbas so that he can become his successor.

A few days ago, a report emerged on social media claiming that a critically ill Abbas had died in a hospital in Amman. Fatah spokesman Osama al-Qawasmi hastened to publish a denial in the Palestinian media: “The reports in the social media about the P.A. chairman’s death are not true, and his state of health is good.”

To discredit the rumors, Abbas’s office issued pictures of him addressing, by telephone, a conference on the Jerusalem issue that was held in Al-Bira, as well as a short video segment in which he appears to be working in his office.

This is not the first time fake news about the P.A. chairman’s health has been spread on social media. Two years ago, similar reports were disseminated, and P.A. officials claimed that Mohammed Dahlan, a bitter adversary of Abbas, was behind them. Dahlan vehemently denied the accusations.

In recent months, Dahlan has ceased his attacks on the P.A. chairman and his associates. Fatah sources say this was at the behest of the rulers of the United Arab Emirates, for whom Dahlan serves as a security adviser, to help achieve reconciliation between them and the P.A.

The Quds news agency reported on June 6 that Abbas was having trouble conducting his work. Citing unidentified sources, the agency claimed Abbas had been exhausted by the visit to the Mukata in Ramallah last week by Jordanian Foreign Minister Ayman Safadi and had to take a two-day leave of absence.

Abbas recently had health checkups in Amman and Germany, and it was said that he was in good health.

The Quds news agency also claimed that the social media reports about some of Abbas’s powers being delegated to al-Sheikh stem from the intense power struggles in Fatah and the severe rift in its Central Committee.

Senior Fatah official Abdullah Abdullah said Israel was behind the reports on Abbas’s deteriorating health to sow confusion in the Palestinian arena. Other Fatah officials claimed that right-wing Israeli websites had fabricated them.

Israeli security sources rejected the claims as lies and said the reports were circulated by senior Fatah officials who want to create a rift between Abbas and his intended successor.

It is hard to know who is planting all the rumors on social media. The Palestinian General Intelligence Service, headed by al-Sheikh’s ally Gen. Majid Freij, is trying to identify their source. According to Palestinian law, spreading rumors about the P.A. chairman is a criminal offense. It can reasonably be assumed, however, that the rumors are being circulated with great finesse by al-Sheikh’s bitter political adversaries.

In the P.A., the malicious rumors are ascribed to Prime Minister Shtayyeh, senior Fatah officials or Hamas.

Abbas’s choice of al-Sheikh as Erekat’s temporary replacement came as a surprise to the Fatah movement. In the next stage, he intends to promote Freij to membership of the Fatah Central Committee.

The tripartite axis of Abbas, Hussein al-Sheikh, and Majid Freij is currently leading the P.A., to the consternation of other Fatah officials such as Jibril Rajoub and Mahmoud al-Aloul, each of whom sees himself as Abbas’ successor.

In any case, a senior Fatah official believes that if Abbas is incapacitated or dies, the one who will temporarily replace him will be the former speaker of the Palestinian National Council, Rawhi Fattouh, for a period of 60 days until the presidential elections.

Although Hussein al-Sheikh will be able to run in those elections, his chances of winning are now poor in light of his blemished reputation in the Palestinian street.

Yoni Ben Menachem, a veteran Arab affairs and diplomatic commentator for Israel Radio and Television, is a senior Middle East analyst for the Jerusalem Center. He served as director-general and chief editor of the Israel Broadcasting Authority.

This article was originally published by the Jerusalem Center for Public Affairs.