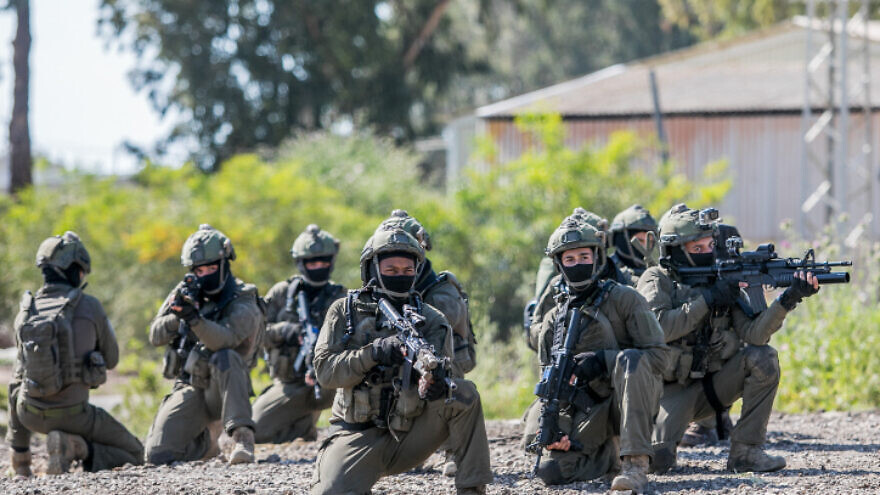 Soldiers from the IDF's 669 combat search and rescue unit rehearse a battlefield rescue operation at a training base in central Israel on April 13, 2019. Photo by Yossi Aloni/Flash90.
Spread the word.
Help JNS grow!
Share now:

The purpose of the drill, which was planned in advance as part of the training program for 2020, is to improve the IDF’s offensive capability and the coordinated operation of all ranks, the military said in a statement.

The exercise involves the IDF General Staff, regular and reserve forces, air, sea and land arms, as well as the intelligence, logistics and cyber-defense divisions, according to the IDF.

As preparation for the exercise, the IDF General Staff conducted training sessions for all division and battalion commanders, with a focus on assault doctrine and standardizing terminology.

In an address to the commanders of the Paratroopers Brigade ahead of the drill, IDF Chief of Staff Lt.-Gen. Aviv Kochavi instructed them to prepare for war to erupt at any moment.

“What operations were there between 1956 and 1967? Eleven years without war. And then it came. I’ll tell you what the greatest illusion is. The greatest illusion is that [war] is a long way off. You will prepare for it to happen tomorrow,” said Kochavi. When it breaks out, he said, “it almost always breaks out by surprise. If I have one basic message to convey to you with regard to this whole matter, it is to prepare in earnest.”

The commanders’ objective, said Kochavi, was simple: “The greatest result possible, in the shortest time possible, at the lowest cost possible.” This, he said, could not be achieved without ground maneuvers, without the “massive entry” of ground forces.

As part of “Lethal Arrow,” Israelis were warned to expect increased movement throughout the country of fighter jets, helicopters and aircraft, as well as of security forces, vehicles and vessels, including in the Haifa and Ashdod ports.

The military emphasized that special health procedures had been put in place for the exercise in light of the COVID-19 pandemic. The drill is scheduled to last until Thursday afternoon.