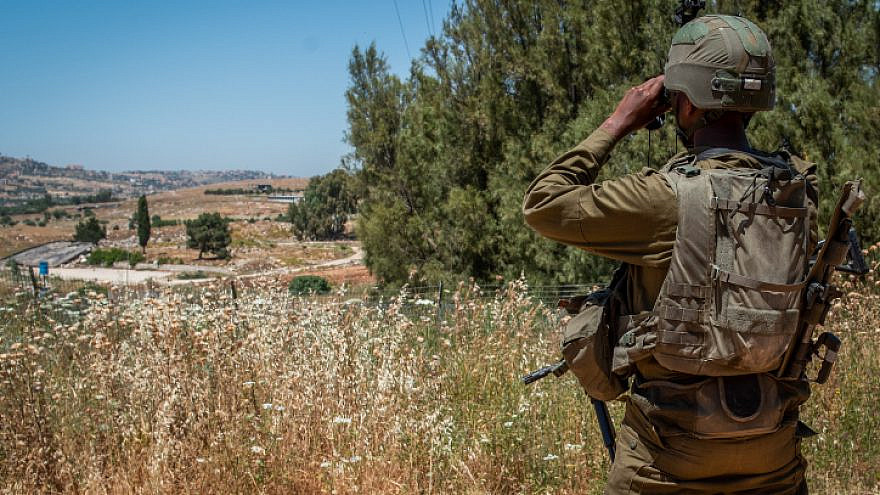 Israeli soldiers on guard near Metula, on the border between Israel and Lebanon, on May 15, 2021. Photo by Basel Awidat/Flash90.
Spread the word.
Help JNS grow!
Share now:

(May 18, 2021 / JNS) The Israeli Air Force announced on Tuesday that it had shot down an unmanned aerial vehicle (UAV) that intruded into Israeli airspace at Emek Hamaayanot, in northern Israel, near the Jordanian border. Its fragments are in the possession of the security forces, the military said in a statement.

The incident comes after six failed rocket launches from Lebanon set off warning sirens in northern Israel on Monday night, triggering return fire by the Israel Defense Forces. The IDF said the launches set off sirens in Kibbutz Misgav Am, adding that the rockets had fallen inside of Lebanon. In response, IDF artillery forces fired toward the sources of the launches, the military said.

In the wake of the attack, the military ordered local councils within two and a half miles of the Lebanese border to unlock public bomb shelters, Ynet reported. It was not immediately clear which organization fired the projectiles.

Since the current round of fighting broke out on May 10, Hamas and Palestinian Islamic Jihad have fired nearly 3,500 rockets at Israel, the Israeli military said on Tuesday. Of those, some 500 have fallen inside Gaza, according to the IDF. Israel’s Iron Dome defense system intercepted approximately 90 percent of projectiles heading for populated areas in Israel.

The rocket-fire from Gaza appeared to slow down over Monday night, but several rockets were launched at southern Israel on Tuesday morning, triggering sirens in Kibbutz Ein Hashlosha.

The IAF continued “Operation Guardian of the Walls” on Monday night, striking Hamas military assets in Rimal, in the western part of Gaza City. IAF jets also hit rocket-launching sites that had threatened Tel Aviv, Ashkelon and other locations, according to the military.

In addition, the IAF launched a fourth wave of bombardment against Hamas’s “Metro” system of underground tunnels. The strikes saw 62 fighter jets drop 110 guided munitions on the tunnel system, according to the Israeli military. Earlier on Monday, the IDF announced that it had destroyed some 62 miles of tunnels running under Gaza in the first three waves of strikes.

Other targets hit included the homes of Hamas commanders, used to provide operational support for attacks on Israel, according to the military.

A Hamas anti-tank squad was also hit on Monday night.

Also on Monday, the IDF, working with the Israel Security Agency, killed the Northern Brigade Commander of the Palestinian Islamic Jihad in Gaza, Hassam Abu Harbid.

According to the IDF, Abu Harbid had served as a PIJ commander for over 15 years, and was behind a series of anti-tank missile attacks on Israeli civilians, including the attack on the first day of hostilities on May 10, which injured an Israeli civilian near Sderot.