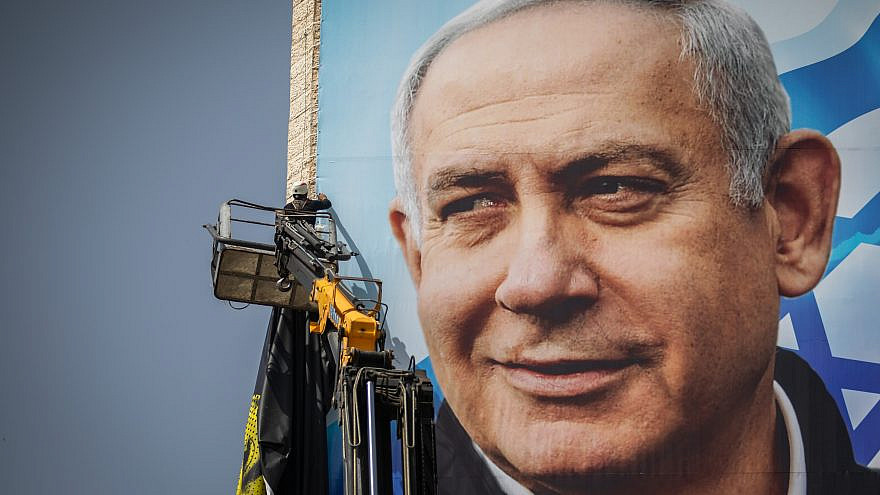 (March 10, 2021 / JNS) Israeli Prime Minister Benjamin Netanyahu made his case for why he believes—again, or rather, still—that he is Israel’s strongest candidate to head Israel’s next government in the fourth round of elections in two years. He also said that he believes his legacy will be as the “protector of Israel.”

First, he said, “I devoted much of my adult life to preventing Iran from having a nuclear weapon,” and second, he talked of being the “liberator of its economy because I have introduced a free-market economy.”

In a sit-down interview on Tuesday with journalist Lahav Harkov as part of the Tel Aviv International Salon pre-election series with main candidates from the largest political parties, Netanyahu touted his achievements and experience that will continue to move Israel forward, as well as how he will resolve Israel’s internal and external issues.

The prime minister said Israel is “leading the world in [coronavirus] vaccines” and “leading in coming out for the economy.”

“I personally intend to devote myself this year to the economy, so we are not merely the world champion of vaccines—vaccination nation—we’re also going to be the world champions in having the fastest-growing economy, which includes tourism and travel,” he said.

Asked about his economic stimulus plan over the next few months until a new government is formed, Netanyahu was confident, both that he will win and that he has mapped out a course, saying, “the minute I form the next government, the first decision that I make will be to pass the remaining economic stimulus, in addition to NIS 100 billion (about $30 million) that we put forward. … But beyond that, I have plans to revive the economy, the way I did that in 2003 as finance minister [and] got Israel out of a crisis into a tremendous revival, and again in a global economic crisis in 2009, [getting] Israel out with the highest ratings of credit agencies in the world, the best that we had ever. I’ve done that, and I’ll do it again.”

Israel also faces a high cost of living and growing economic inequalities. Asked how he plans to reduce living costs, especially after already being prime minister for 12 years, Netanyahu replied, “I turned Israel from a developing economy to one of the world’s most advanced developed economies, but I wasn’t satisfied with that. … Six years ago, we were in the last place in the OECD, except for Turkey. I formed a government committee where every two weeks, I or the director-general of the Prime Minister’s Office chopped, with a machete, regulations. We moved 18 places—more than any other country in the world, in deregulating. But that’s not enough for me. I want to bring us into the top 10.”

“I will deregulate because it is in my blood. I love chopping the bureaucracy. I love to do it! It’s not really that it’s good for the country; it’s good for me! I like it! So I will do it,” he said.

“We brought Israel to be in the position that we’re emerging from corona with virtually the strongest economy in the world with the shekel at a 12-year high [and] our credit ratings at an all-time high.”

He cautioned, however, that “we still have a job to do. The biggest problem will be … the economy could tank again. If we don’t bring tens of millions of new vaccines, if we don’t do that, then we’ll go back to lockdowns and so on. I will bring the economy up.” 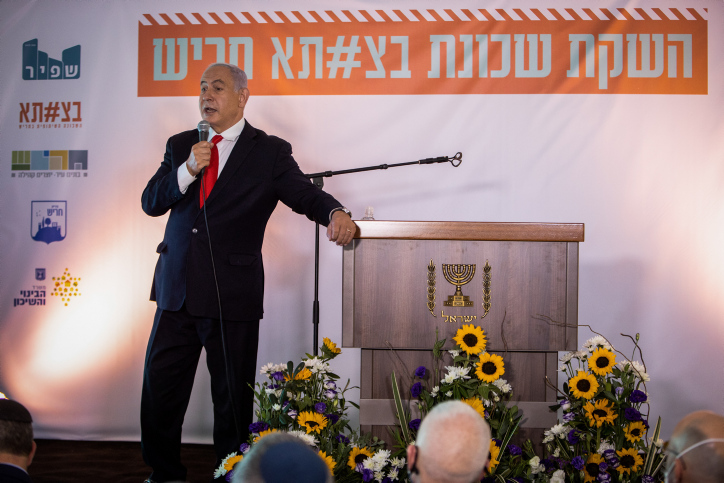 Israeli Prime Minister Benjamin Netanyahu speaks during a ceremony for a new neighborhood in Harish, a town and a local council in the Haifa District, on March 9, 2021. Photo by Flash90.

‘I have a close relationship with the American public’

Turning to foreign affairs and his previous shaky relationship with former President Barack Obama, Netanyahu said he and U.S. President Joe Biden “have had a very close relationship for forty years. I’m not just saying that. It’s real.”

“I have a close relationship with the American public,” he said. “They know me very well. And they respect me. Many of them respect me a lot. And some of them disagree with me. But that happens in the ‘mishpacha’ [family].”

Asked if he regrets embracing former President Donald Trump, Netanyahu said, “No, I think what he did—recognizing the Golan under Israeli sovereignty, recognizing Jerusalem as Israel’s capital, moving the embassy here, getting out of this dangerous Iran deal—I think these are great things. And, of course, I embraced it because that’s my policy.”

“When an American administration does things that are good for Israel, then I definitely embrace it,” he emphasized.

Importantly, Netanyahu touted his achievements in fighting the Iranian threat to destroy Israel.

“I think if it weren’t for the effort that I led worldwide, including going to the American Congress and standing up against this Iran deal, Iran would have already had not a nuclear bomb but an arsenal of nuclear bombs. The political leadership that I put in front of the whole world—the six leading powers in the world were supporting this, and I opposed it—the actions we took, including sending the Mossad into the heart of Tehran and yanking away their secret atomic archive with 100,000 documents that showed they’re pursuing nuclear weapons under different guises, and many other activities that I won’t itemize that I authorized personally, without that, Iran would already have had a nuclear arsenal.”

He also addressed recent reports about a growing alliance with the United Arab Emirates, Bahrain and even Saudi Arabia against Iran.

“I can say that there is a realignment in the Middle East,” he acknowledged. “So when I gave that speech … we got calls from Arab leaders in the Middle East who said, We can’t believe what your prime minister is doing right now. He’s standing against the whole world, against the U.S. at the time, and he’s lifting the torch of resistance against Iran’s nuclear program.’ ”

“That’s really what did the pivot,” he said. “That’s what made them come to Israel. That’s what forged the four historic peace agreements that we have today. Because they saw Israel not merely as a source of technology for everything—clean energy, hi-tech, water and so on. They saw Israel as standing up against Iran, which threatens them. It threatens us more, with destruction, but they understood that, so Israel became an indispensable ally.”

‘I am very liberal on conversions’

Regarding the recent Israeli Supreme Court decision allowing Reform and Conservative conversions undertaken in Israel to be recognized for purposes of aliyah, Netanyahu said he believes that it is important to separate this issue from Israel’s “Law of Return,” which gives Jews the right to come and live in Israel and to gain Israeli citizenship.

Netanyahu cautioned that Israel must “protect and prevent fake conversions that could enter the country.”

“In fact, I put up a fence, you know,” he said. “I prevented the overrunning of Israel, which is the only First World country that you can walk to from Africa. We would have had here already a million illegal migrants from Africa, and the Jewish state would have collapsed” under the weight. “I think we can solve the problem of conversion for all streams and all denominations in Judaism, but we also have to protect the borders of Israel so that we’re not overrun. I think we can find a balance between the two. That’s what I intend to do.”

Asked whether he supports efforts in the Knesset to pass a bill to override certain Supreme Court decisions, Netanyahu said, “I think we need judicial reform. I think everybody understands there’s been an imbalance.”

“The great thing about democracies … is they have a balance between the three branches of government,” he added. “I think sometimes we lost the balance in Israel.”

Confronted with his own criticisms of Attorney General Avichai Mandelblit and the judiciary, Netanyahu was asked whether he believed that the court cases against him are attempts to overthrow him and are undermining the rule of law in Israel.

“No,” he said. “I think what undermines the rule of law is when the prosecution is—as [U.S. Associate] Justice [Robert H.] Jackson, one of the great American jurists—said: ‘It’s when prosecution uses rules or creates rules.’ In my case, they created a new crime; they created a crime that doesn’t exist in the rulebooks of the U.S. or any other democracy in the last 244 years—a fake witch hunt, with fake charges, with blackmailing witnesses.” 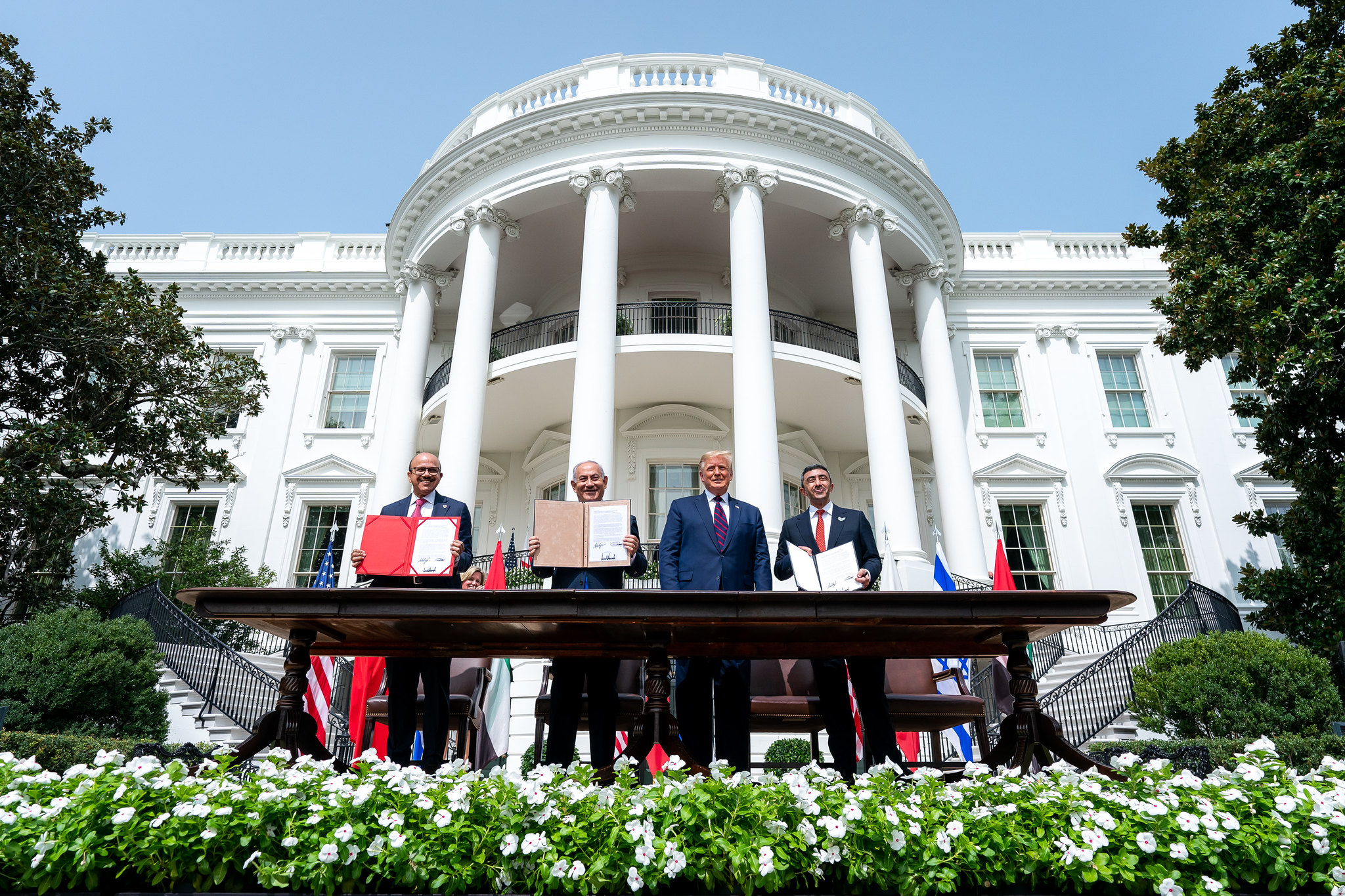 ‘A Dubai and Abu Dhabi in Arab communities in Israel’

In the 2015 elections, Netanyahu warned his constituency that Arab voters were “coming out in droves to the polls.” Now, Netanyahu has turned his attention to Israel’s Arab community, hoping to draw their votes. The question is: What has changed? And why now?

“I’ve been here all the time; you just didn’t notice,” he said. “From the year 2010—the year I became prime minister for the second time—until now, that’s 11 years, I put in 21 billion shekels for the Arab sector. Nobody noticed. For infrastructure, for education, for welfare, for sewage, for roads, for transportation. Nobody noticed … but they noticed.”

“And I made four historic peace treaties with Arab countries,” he said. “I did this for all our citizens, and the Arab citizens understand that.

“And I have a vision, which is really a classic liberal vision in the traditional sense of the word, that every citizen of this country, every child of this country, every girl and boy should have an equal opportunity in education, in having a safe environment to open a business, to get credit—and that’s what I’m doing.

“I’m changing things because it’s a battle between modernity and medievalism,” he continued. “The Islamists want to take us back; the modernists like me want to take us forward. I want them to be involved, and you know what, they’re coming to Likud because they understand that what I said is true.

“This is my vision. I’d like to see what I see in Dubai and Abu Dhabi in the Arab communities here. You think that’s impossible? I think it’s possible. It’s happening in the Jewish parts. Why can’t it happen in the Arab parts?”

In past election campaigns, as well as the current one, Netanyahu has relied heavily on the ultra-Orthodox parties for their support.

Asked whether he would promote equality for all citizens, including the ultra-Orthodox, with regard to serving in the Israel Defense Forces or adhering to coronavirus guidelines, Netanyahu said “everybody should recognize that we are advancing a government that is working for all of Israel’s citizens.”

“I, for one, object to the idea, this attempt to constantly divide and attack, one part of the population against the rest,” he said. “They’re moving with us. They’re joining the workforce in record numbers because of my—frankly, my free-market approach and the reduction all the time of dependence on the government. I think that what has happened is the haredi community is joining modernity. That’s the right thing to do.”

“But the real thing is to have the haredi community, the Arab community, integrated into this tremendous success story, this miracle that is the State of Israel, and the miracle is based on the free-market reforms that I put in and will continue to put in and draw everyone in,” he stated. “That’s the real solution to our future.”