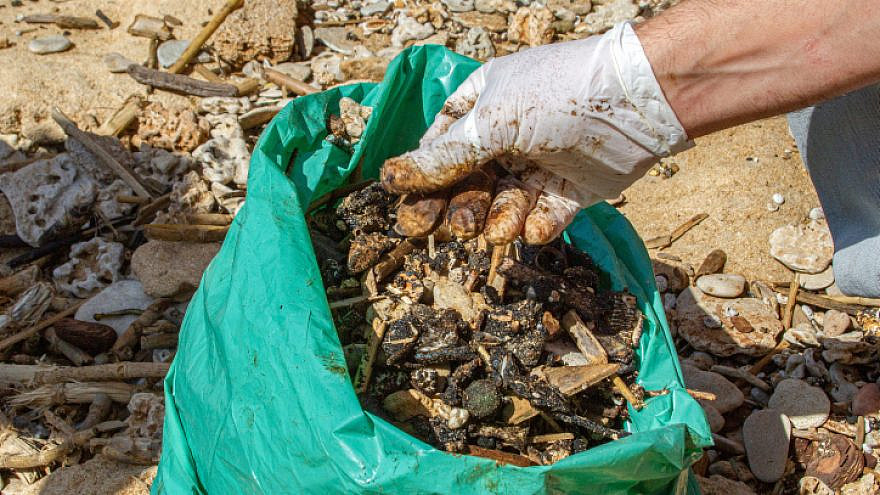 (February 25, 2021 / JNS) Israel’s Health Ministry on Wednesday announced a temporary ban on the sale of fish from the Mediterranean Sea, due to the massive tar spill last weekend along the country’s shores.

Although so far, there is no indication of any danger posed by eating fish caught in the sea, according to the Health Ministry, samples have been sent to Agriculture Ministry laboratories for testing to rule out the presence of contaminants, and the results are expected in the coming days.

In what Israel’s Nature and Parks Authority called “one of the worse ecological disasters in Israel’s history,” tons of toxic tar washed up on 100 miles of Israel’s 112-mile-long coastline.

Professor Ilana Berman, head of the School of Marine Sciences at the University of Haifa, said that the toxins may have an effect on the marine food chain for many years.

“Even if they manage to clean what is visible on the surface, a large part of the pollution goes down and sinks to the bottom of the sea, and you don’t see it,” she said.

Israel’s Cabinet on Tuesday approved the allocation of 45 million shekels ($13.8 million) to help deal with the massive spill.

“This was a major ecological disaster in which 1,000 tons of petroleum and tar were piled up on our beaches,” said Israeli Prime Minister Benjamin Netanyahu, who, together with Environmental Protection Minister Gila Gamliel, proposed the allocation plan.

The cause of the spill is still under investigation. Israel’s Kan News reported on Monday that the Greek-flagged oil tanker Minerva Helen was a suspect, though the vessel’s owner has denied any connection with it.