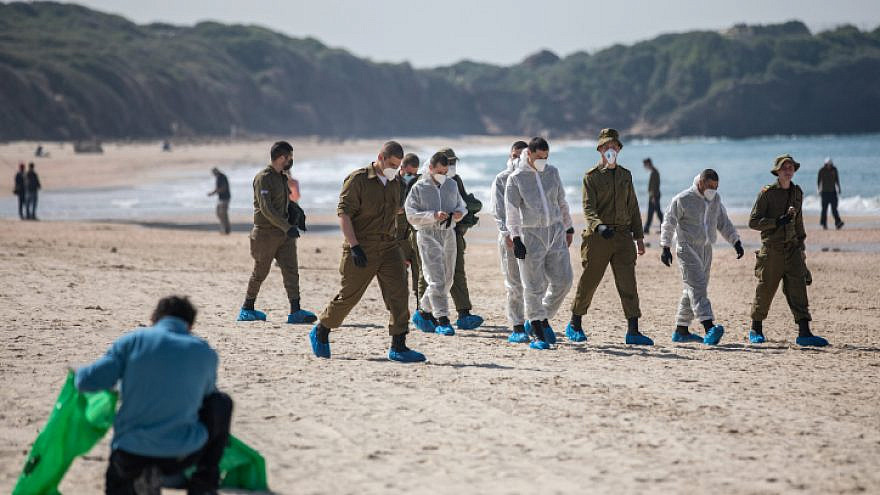 (February 24, 2021 / JNS) Israel’s Cabinet on Tuesday approved the allocation of 45 million shekels ($13.8 million) to help deal with a massive oil spill that has polluted some 100 miles of Israel’s coast. Approximately $200,000 will be advanced as immediate assistance to local authorities and the Nature and Parks Authority, according to an official statement.

“This was a major ecological disaster in which 1,000 tons of petroleum and tar were piled up on our beaches,” said Israeli Prime Minister Benjamin Netanyahu, who, together with Environmental Protection Minister Gila Gamliel, proposed the allocation plan.

“We must act quickly, before it sinks into the ground, especially in rocky areas, and this would be damage that would be with us for many years,” he added.

The cause of the spill, which the Nature and Parks Authority has called one of the worst environmental disasters in Israel’s history, is still under investigation. Israel’s Kan News reported on Monday that the Greek-flagged oil tanker Minerva Helen was a suspect. The vessel’s Greek owner has denied any connection with the spill, according to Kan.

Gamliel said that the investigation—about which a gag order imposed on Monday was partially lifted on Tuesday—was “complex,” though vowed that Israel would “apprehend and severely punish” those responsible.

The Cabinet tasked the environmental protection minister with submitting draft legislation on readiness and response to maritime oil pollution events within 30 days. It was also decided that the Environmental Protection Ministry and the Finance Ministry would discuss budgeting some $8 million for the Maritime Pollution Prevention Fund, to better prepare it to respond to future crises.

The fund, established in 1979, is dedicated to combating and preventing marine pollution. To date, its primary funding sources have come from ships’ fees, pollution-related fines, levies and sanctions.

The Cabinet also decided to establish a committee to recommend, within six months, ways to deal with and prevent maritime-disaster scenarios, including the necessary budgets and personnel.