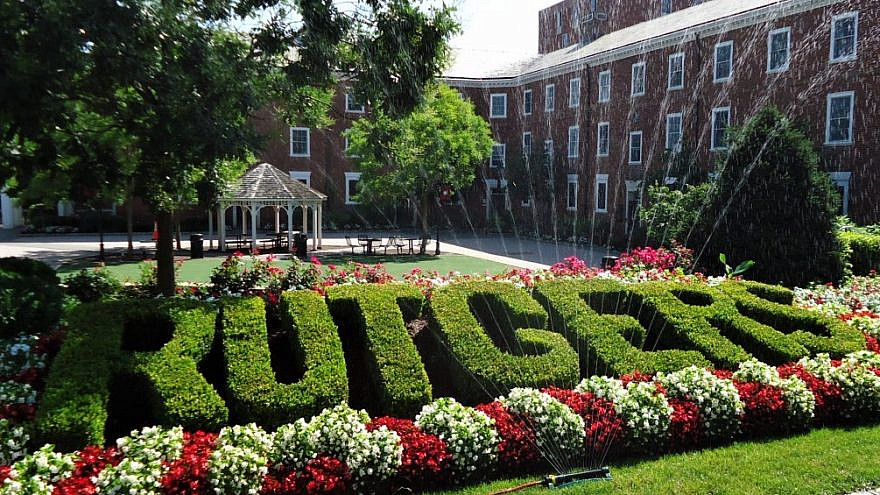 (April 28, 2022 / The Jewish Link) A representative of an organization whose mission is to “bolster the Palestine solidarity movement by challenging efforts to threaten, harass and legally bully activists into silence and inaction” said during a virtual program sponsored by Rutgers University in New Brunswick, N.J., that the group has been responding to reports of students being “canceled” by being falsely accused of anti-Semitism at universities and colleges.

Amal Thamateh, the Michael Ratner Justice Fellow at Palestine Legal, spoke on April 20 at the program, “Know Your Rights: College Activism on Palestine” on behalf of the Center for Security, Race and Rights, part of Rutgers School of Law.

The center engages in “research, education and advocacy on law and policy that adversely impact the civil and human rights of America’s diverse Muslim, Arab and South Asian communities.”

Its website also states the center works through an interfaith, cross-racial and interdisciplinary approach, and was formed after 9/11 as a response to discrimination and attacks against members of those communities.

Sahar Aziz, director of the center and professor of law and chancellor’s social-justice scholar, did not return email requests for comment on whether Muslim students are being targeted on Rutgers’ campuses, or pro-Palestinian students have felt canceled.

‘Laws designed to self-chill you into self-censorship’

Thamateh said her organization’s goal is to empower students to “navigate through the legal landscape” by providing information and resources to mitigate the cost of activism. She stressed the organization would not provide information on any illegal tactics and would not act as a legal advocate but would refer anyone with a legal issue to a local attorney.

Much of the program was spent advising viewers on their legal rights in dealing with law enforcement, the First Amendment right to free speech and assembly, how to legally protest, and what to do should they be arrested or questioned by law enforcement. 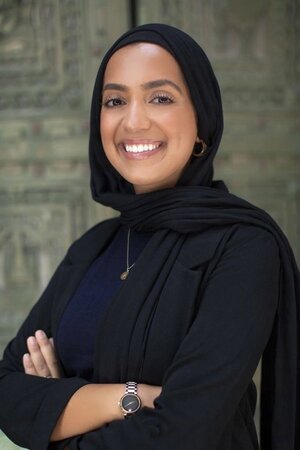 Thamateh said other issues fielded by her organization include students worried about police surveillance and interrogation, false accusations of supporting terrorism, worries about legislation targeting the BDS campaign against Israel, or being detained and being refused entry to Palestine.

BDS is considered anti-Semitic by most Jewish organizations, the U.S. State Department, as well as individual countries, states and municipalities. It has been overwhelmingly condemned by Congress and 35 states. New York and New Jersey have laws requiring divestment from any company participating in BDS, an issue that has begun to be tested in the case of Unilever, the parent company of the ice-cream maker Ben & Jerry’s.

However, Thamateh said BDS “is an extension of First Amendment principles” and said her organization has seen trends such as “a wave of legislative tactics” at all levels of government to silence its advocates.

“None of these take away your right to boycott Israel,” she said. “The laws are designed to self-chill you into self-censorship.”

This is often accomplished by labeling all such moves as anti-Semitic, she explained. She encouraged reputation management and encryption when possible in digital communications, which may affect future employment. Palestine Legal has seen many posts “weaponized” against activists.

“We’ve seen a lot of Palestinian activists censored and bullied,” said Thamateh, by such organizations as StopAntisemtism.org.

In an email response to a Jewish Link request for reaction to the charge it was bullying pro-Palestinian activists, StopAntisemitism.org said: “Palestine Legal is notorious for representing known anti-Semites such as Nerdeen Kiswani and Yasmeen Mashayekh, who have both called for Jews to be murdered and wiped off the map. We should be asking, ‘Where is Palestine Legal’s moral compass to defend those that wish death on a marginalized group like Jews’.”

Kiswani, a City University of New York law student, was named “Antisemite of the Year” in 2020 by StopAntisemitism.org. She has posted on Instagram and taken down photos of herself with known terrorists, although last month, Kiswani’s organization Within Our Lifetime was banned from Instagram for inciteful hate speech.

Mashayekh, a “diversity, equity and inclusion” senator to the Viterbi Graduate Student Association at the University of Southern California posted a now-deleted tweet threatening to kill Jews.

Groups such as Students for Justice in Palestine can make their cause known through protests, strikes, boycotts or civil disobedience and by involving the general community, said Thamateh.

She noted the First Amendment protects the rights of activists by allowing such expression as messaging on T-shirts, passing out leaflets, holding up signs and boycotts.

“You have a right not to speak,” she said in reference to mediation dialogues between opposing sides called by a college that students can refuse to attend.

However, the university has a right to “discriminate” against speakers based on their views.

Thamateh suggested contacting the university administration and seeking legal support, building relationships with faculty, documentation of incidents as well as a publicity campaign “to draw attention to the suppression.” 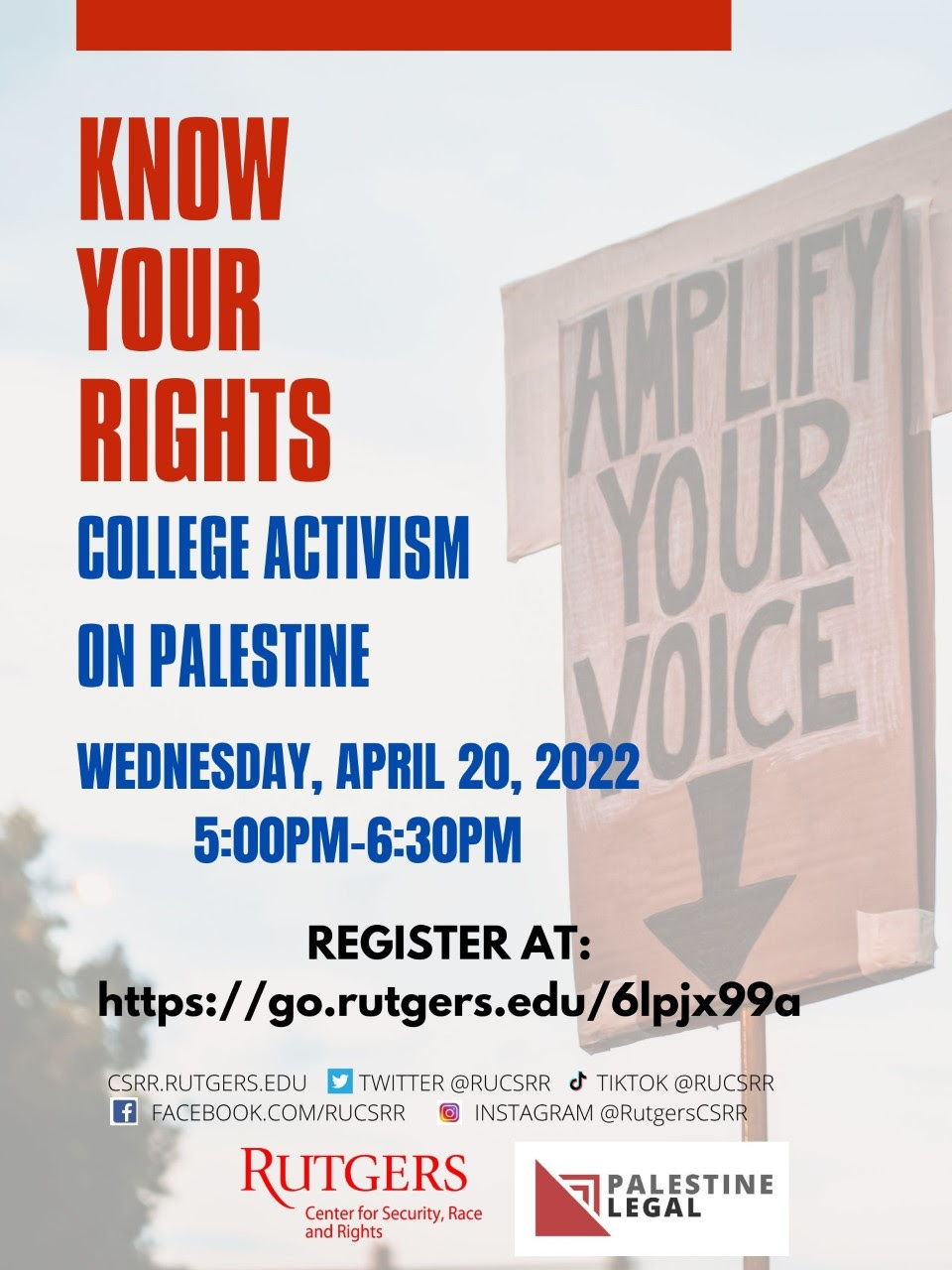 Although Palestine Legal doesn’t advocate civil disobedience, those who choose to use it as a protest tactic were advised to write its number as well as that of a local lawyer on their arms.

Thamateh also cautioned students to be aware of local and state laws. For example, in New Jersey, if Palestinian advocates were to disrupt an Israeli speaker at a university they would be in violation of the law and could be arrested. She also warned viewers to be aware that police treat people of color differently and advised not to open the door to law enforcement unless they have a warrant.

“Police can lie to you, but you can’t lie to them, so don’t lie if the police approach you on the street,” said Thamateh, adding that in New Jersey, police can’t stop anyone and request their name or identification unless they have a summons or are conducting an investigation.

This story originally appeared in the Jewish Link.