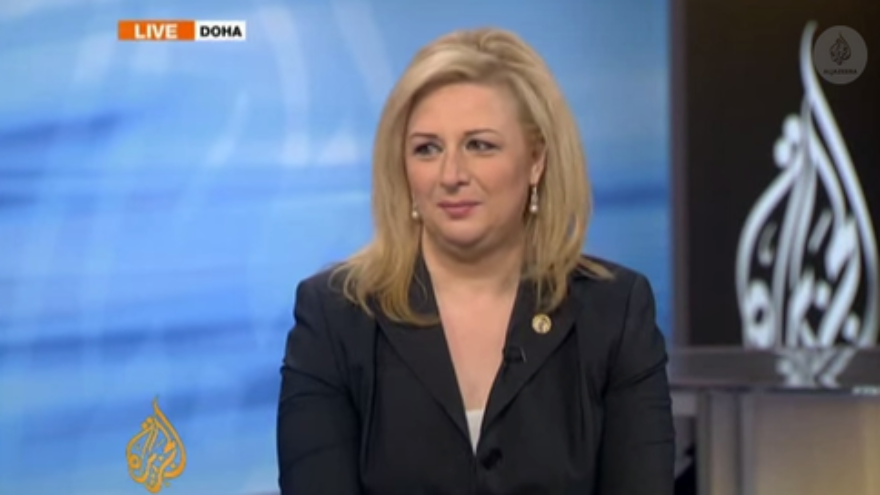 Palestinian Authority leader Mahmoud Abbas and other P.A. officials, as well as Hamas—the terrorist group controlling the Gaza Strip—have condemned the rapprochement between Abu Dhabi and Jerusalem, labeling the move “a stab in the back.”

Many other Arab leaders opted not to respond publicly to the Israel-UAE peace deal, while a handful issued statements welcoming the move.

Speaking with Kan news in late August in what she termed an “accidental interview,” Arafat criticized the P.A. for “falling into the trap” of opposing the UAE peace deal, saying, “If Yasser Arafat were alive he’d go to [Abu Dhabi Crown Prince] Mohammed bin Zayed and ask how to deal with him [Israeli Prime Minister Benjamin] Netanyahu]. But to go and say an Arab country is a betrayer? Enough with the slogans. We collaborate with Israel, with the Shin Bet and Mossad. Who are you kidding?”

The PLO leader’s widow took her support of the deal a step further, and after Palestinian demonstrators burned UAE flags and pictures of Mohammed bin Zayed in protest, took to Instagram to apologize to the Emirati people.

“I want to apologize, in the name of the honorable Palestinian people, to the Emirati people and their leadership for the desecration and burning of the UAE flag in Jerusalem and Palestine and for insulting the symbols of the beloved UAE,” she wrote.

“These are not our morals, nor our customs, nor our traditions. The difference in opinion does not spoil the friendship. I tell our people to read history well to know how the UAE, past and present, supported the Palestinian people and the cause. I apologize to the people and leadership of the Emirates for any harm done by any Palestinian to these generous and kind people, who have always welcomed us.”

She repeated this position in several interviews with Arab media outlets.

That did not go over well with Fatah, the faction heading the Palestinian Authority.

Munir al-Jarub, head of Fatah’s public diplomacy department, took to Facebook, writing, “Mrs. Suha Arafat insists on fulfilling her dubious role in the campaign against the Palestinian leadership and using the name of Abu Amar [Arafat] to market what the UAE government is doing, despite the fact it undermines the Palestinian issue.

“The danger in her statements lies with the ethnic and religious position [she takes] on the traditions and customs of our people, whose holy places are in danger,” he continued. “We cannot make sense of why she would try to provoke internal strife at this time, apart from serving those who seek to eliminate the Palestinian issue. We will not be dragged into this dangerous place, nor will we allow anyone to peddle in Arafat’s name.”