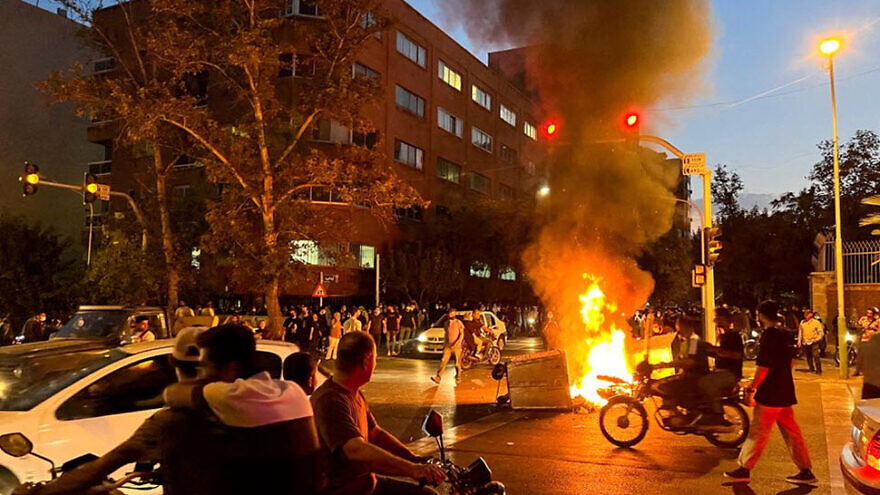 (October 12, 2022 / JNS) Revolutionary fervor against the ruthless strongmen who rule the Islamic Republic of Iran has gripped large swaths of the vast Mideast nation.

Social and labor unrest have entered into their fourth week after the morality police allegedly murdered a young woman for failing to “properly” wear a hijab to cover her hair.

The pressing question is: Will this latest wave of protests sweep the regime into oblivion?

“We are seeing the beginnings of a revolution in Iran,” Alireza Nader, an expert on Iran and American policy in the Middle East, told JNS. “The scale of the people’s anger against the regime is unprecedented. Iran hasn’t witnessed such large and intense anti-regime demonstrations since 1979. It appears people are intent on overthrowing the Islamic Republic.”

Until now, aside from some strikes among students at around 10 universities and among owners of small shops, labor unrest did not spill over into the main hub of Iran’s ailing economy, the oil and gas sector.

That has now changed.

On Monday, work stoppages hit Iran’s vital energy sector in the oil-rich province of Bushehr on the Persian Gulf.

According to the U.S.-based Center for Iran Human Rights in Iran, the Contractual Oil Workers Protest Organizing Council wrote on its Telegram channel: “To our colleagues in oil, gas and petrochemical projects, in all refineries and petrochemicals; in the oil platforms as well as the drilling sites, we declare that now is the time for widespread protests and to prepare ourselves for nationwide and back-breaking strikes.”

Nader, who has written about the possible role of labor unions and worker unrest in ousting the clerical regime, said the United States and other Western nations should “Set up a strike fund to help workers and their families.” 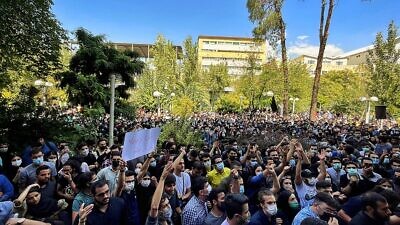 Students at the Amirkabir University of Technology in Tehran demand an end to the compulsory hijab and the Islamic Republic, Oct. 12, 2022. Credit: Darafsh/Wikimedia Commons.

Sheina Vojoudi, an Iranian dissident who fled the Islamic Republic for Germany and closely follows the unrest in her native country, told JNS, “We were never this close to overthrowing the Islamic Republic. The Iranian new generation has risen against the ayatollahs’ tyranny. These are the school students who want regime change in Iran. They send videos and ask all the Iranians to join them because they don’t want to live under the Islamic Republic.”

She continued, “This time is different; the people are defending themselves. [Maj. Gen.] Hossein Salami, the IRGC [Islamic Revolutionary Guards Corps] commander, has expressed his worry for Basij [IRGC militia] forces beaten by the revolutionaries. This is the first time that they can’t hide their fear. Regime collapse in Iran is imminent. The people know if they go back to their homes, the regime will go after them, so they must remain in the streets.”

The U.S. government under the Trump administration designated the IRGC a foreign terrorist organization.

The Islamic Republic continues to benefit from Western governments failing to call for the end of the theocratic state. President Joe Biden’s special envoy for Iran, Robert Malley, recently said the administration is not interested in a change of Iran’s government. He told NPR that the U.S. wants “a government in Iran that is respectful of the fundamental rights of its people,” but not regime change.

The U.S.-based National Union for Democracy in Iran (NUFDI) on Tuesday sent a letter to the Biden administration declaring, “Recalling President Biden’s mantra that ‘personnel is policy,’ we encourage the administration to consider specifically whether the members of its Iran team—particularly U.S. Special Representative for Iran Rob Malley and his deputy Jarrett Blanc—grasp the present reality of Iran and have the country expertise and ideological flexibility to adjust U.S. policy as the situation in Iran unfolds.”

Malley is controversial for his efforts to placate Tehran with a nuclear accord that would pump $275 billion into its coffers during the first year of the agreement, according to a study conducted by the Foundation for Defense of Democracies.

In exchange for the massive infusion of cash, Iran’s regime would promise temporary restrictions on its development of nuclear weapons.

NUFDI said, “As an Iranian-American community organization, we urge you to recognize the historic nature of this moment and seize the opportunity that it presents to the United States, Iran and the international community. The Iranian people are speaking loudly and with one voice that they reject the regime, that they aim to end its reign of terror in Iran and beyond, that they seek to reclaim both their country and their place among the community of nations and that they need our support in their ongoing struggle for life, liberty and the pursuit of happiness.”

When asked what the West can do to aid Iranians, Vojoudi said, “The Iranians inside and outside Iran expect the Western governments to cut their ties with the murderous regime in Iran. The democracies are witnessing the mass murder of the Iranian revolutionaries by direct gunfire but they still have diplomatic ties with this criminal regime. The regime has brought tanks to Sanandaj [the capital of Kurdistan Province] and Kermanshah [the capital of the province of the same name and the largest Kurdish-speaking city in the country] to kill the civilians.”

She added, “We expect them [the West] to designate the IRGC and its militias like Fatemiyoun [an Afghan Shia force], Hashd al-Shaabi [the Iraqi Popular Mobilization Forces], Hezbollah and Zeynabiyoun [a Pakistani Shia militia], which are helping the regime to kill the unarmed Iranians, as terrorist organizations, ban all the Iranian officials and their families from entering their countries, expel the Islamic Republic’s lobbyists like NIAC [the U.S.-based National Iranian American Council] and all the Islamic Republic officials’ families members who already live in Europe and in the U.S.

“We won’t stop until the collapse of the Islamic Republic. It will happen,” Vojoudi, who is the spokesperson for the senate of the National Iranian Congress, said.