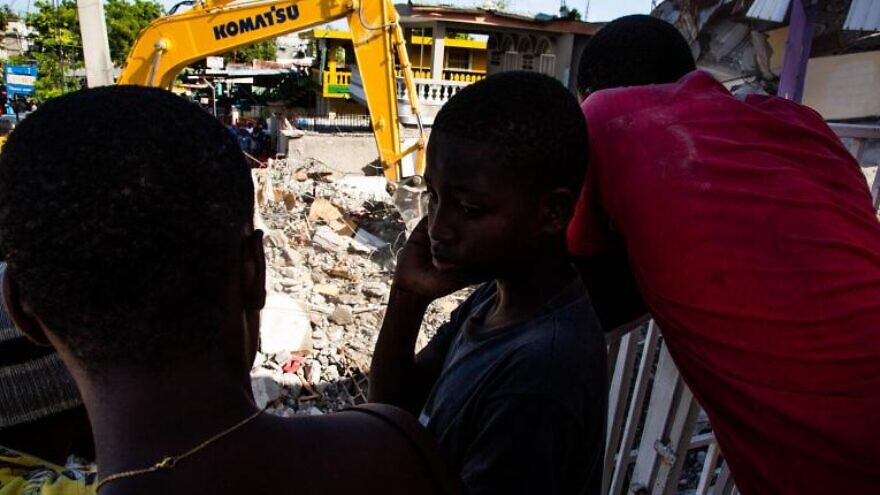 (August 17, 2021 / JNS) Aid efforts to get to the remote site of Saturday’s deadly earthquake in Haiti are ongoing but are being hampered by a tropical storm that brought heavy rains to the region.

Among agencies providing assistance is the Israel nongovernmental IsraAID, which also provided help to the island nation following a 2010 earthquake and 2016 hurricane.

IsraAID spokesperson Ethan Schwartz told JNS that two international team members, including the group’s emergency coordinator for Haiti, were expected to land in Haiti on Tuesday and “will connect with our in-country team of Haitian former IsraAID staff members and partners, who are currently being mobilized to support this emergency response.”

“Our initial priorities will be distributing urgently needed relief items and personal protective equipment, safe water provision, and providing psychosocial and mental-health support to affected communities in the midst of this disaster,” he continued.

As many as 2,000 people have been confirmed dead in the wake of the Aug. 14 quake, which registered a magnitude 7.2 on the Richter scale, with some 7,000 more injured and homeless. Additionally, authorities are saying that nearly 85,000 houses have been damaged or destroyed, along with public infrastructure, including hospitals, schools and bridges.

Adding to the misery was the arrival on Monday of Tropical Storm Grace, which dumped at least five inches of rain on the island.

“Last night, I saw strong winds and heavy rainfall strike the same areas already affected by the earthquake,” UNICEF’s representative in Haiti Bruno Maes said in a press release on Tuesday. “Countless Haitian families who have lost everything due to the earthquake are now living literally with their feet in the water due to the flooding.”

He added that “right now, about half a million Haitian children have limited or no access to shelter, safe water, health care and nutrition.”

Schwartz noted that the storm “compounds the existing emergency situation for communities affected by the earthquake, and, of course, the ongoing COVID-19 pandemic. With that in mind, our team is preparing to respond to these multiple concurrent emergencies when they arrive in the affected area.”