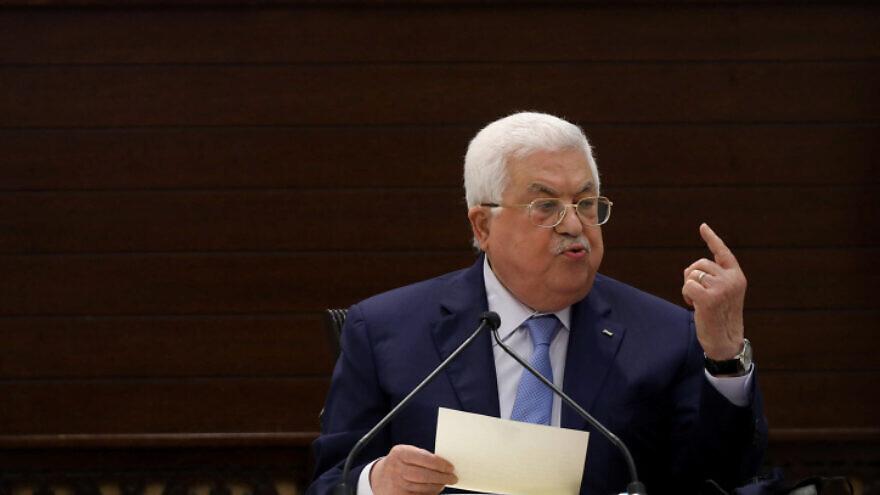 (July 19, 2021 / JNS) The Israeli government led by Prime Minister Naftali Bennett has deducted more than $180 million from the funds it collects for the Palestinian Authority over its refusal to cease payments to prisoners and families of terrorists as part of a long-running campaign called “pay for slay.”

According to the Defense Ministry’s National Bureau for Counter-Terror Financing, this was the amount of money the P.A. spent in 2020 on terror-related expenses. This decision authorizes the Finance Ministry to deduct one-twelfth of the funds each month for the next 12 months.

Israel’s Minister of Intelligence Elazar Stern, together with Likud Knesset member Avi Dichter and others, initiated and promoted a law in 2018 to offset that sum to discourage the P.A.

“It was clear to me, then as today, that these funds that are given to convicted terrorist operatives encourage further acts of terrorism,” he told JNS.

He said the previous government “tried to ignore and postpone the implementation of the law several times,” but ultimately, it was implemented “as a result of heavy pressure.”

Stern said the situation has changed with the new government and noted with satisfaction that within its first month in power, it has implemented the law “without public pressure and without a petition to the High Court.”

“There is a government here that has come to work,” he said. “We, the unity government, will deduct terrorist money to ensure the safety of the citizens of the State of Israel as a Jewish and democratic state.”

In May 2020, the Jerusalem District Court placed a lien on NIS 450 million (nearly $140 million) in P.A. tax revenues after ruling against the authority in several lawsuits charging it with responsibility for numerous terror attacks. Israel collects these funds on behalf of the P.A. under the terms of the 1994 Paris Agreements, part of the Oslo Accords.

Israel is not alone in its position that the P.A. rewards terrorists and encourages terrorism.

In December 2019, the International Criminal Court published its Office of the Prosecutor Report in which it mentioned, for the first time, that the P.A. could be guilty of war crimes over payments to terrorists.

Implications of American aid to the Palestinians

Yet the Biden administration appears unconcerned and officials have stated it intends to renew funding to the P.A.

The problem with this is that the administration would be in violation of the Taylor Force Act and the Anti-Terrorism Clarification Act (ATCA), which prohibit funding to entities that fund terrorism.

In addition, the Biden administration also appears to be pursuing reopening a consular mission for Palestinians in Jerusalem, a move that experts say could violate the 1995 Jerusalem Embassy Act.

ATCA of 2018, and the Promoting Security and Justice for Victims of Terrorism Act (PSJVTA) of 2019 are two amendments to the Anti-Terrorism Act (ATA) that have significant implications on American aid to the Palestinians and U.S. courts’ ability to exercise jurisdiction over Palestinian entities.

PSJVTA reverses ATCA, which says that a defendant consents to personal jurisdiction in the United States for lawsuits related to international terrorism if the defendant accepts American foreign aid.

After the P.A. requested to not receive such aid so as to sidestep this legislation and avoid being brought to court on terrorism charges, Congress passed the PSJVTA, which eliminates the defendant’s acceptance of U.S. foreign aid as a trigger of consent to personal jurisdiction. Instead, PSJVTA says that any P.A. or PLO payments related to terrorist acts that kill or injure a U.S. national act are a trigger of consent to personal jurisdiction.

PSJVTA seeks to force the P.A. to pay damages to U.S. terror victims and their families, whether or not the P.A. receives American aid.

Maurice Hirsch, head of legal strategies at Palestinian Media Watch, told JNS, “The decision to punish the P.A.” and deduct the funds “is very much welcomed.”

“Sadly, the decision again highlights the disastrous reality that the P.A. continues to pay huge financial rewards to terrorists,” he said.

Hirsch noted that while ordinary Palestinians were left dealing with the deadly coronavirus pandemic, the P.A. “chose to spend its limited resources to fuel the flames of hate, rather than providing for the medical needs of the Palestinians.”