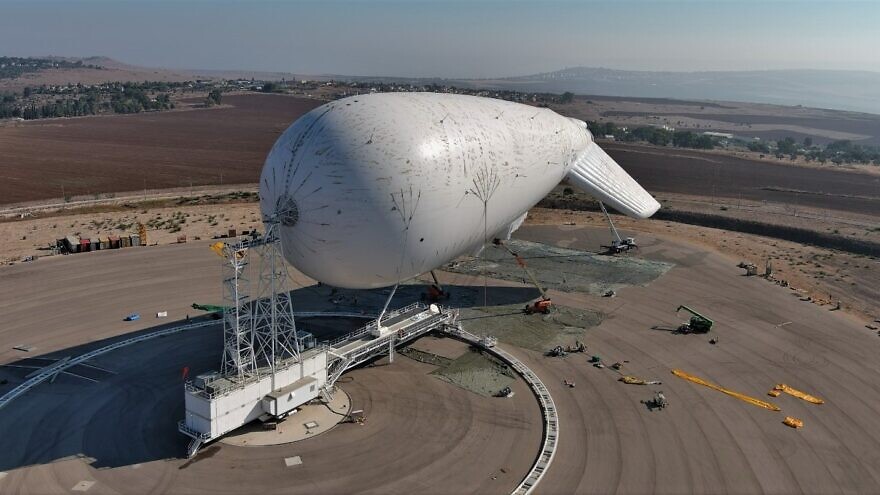 (November 4, 2021 / JNS) Israel’s Ministry of Defense announced on Wednesday the deployment of a large inflatable aerostat carrying an onboard radar designed to boost Israel’s ability to detect aerial threats.

In a statement, the Israel Missile Defense Organization said it commenced inflation of a “High Availability Aerostat System (HAAS) and initial testing for deployment of an Elevated Sensor (ES) system in northern Israel at facilities established by the [Defense Ministry].”

“The HAAS is one of the world’s largest aerostats, developed and manufactured by TCOM, a U.S. company specializing in aerostat surveillance solutions. It is designed to carry an improved sensing system, to provide detection and early warning of advanced threats.”

The aerostat will carry a radar made by IAI-Elta developed under a cooperative program between IMDO and the U.S. Missile Defense Agency.

“In several flight-test campaigns conducted in recent months, we have demonstrated the outstanding capabilities of Israel’s multi-tier missile defense, including against cruise missiles,” said IMDO director Moshe Patel. “The IMDO and MDA, with the IAF and defense industries, are constantly improving Israel’s threat-detection capabilities. This aerostat system will cruise at high altitudes and provide an exceptional, multi-directional detection capability against advanced threats.”

IAF Commander Maj. Gen. Amikam Norkin said the ES system will be “a significant component in strengthening our capabilities to defend the country’s borders against a variety of threats and will enable us to build a more accurate, broader air-surveillance picture. The IAF has both the defensive and offensive systems to defend the State of Israel and its sovereignty.”