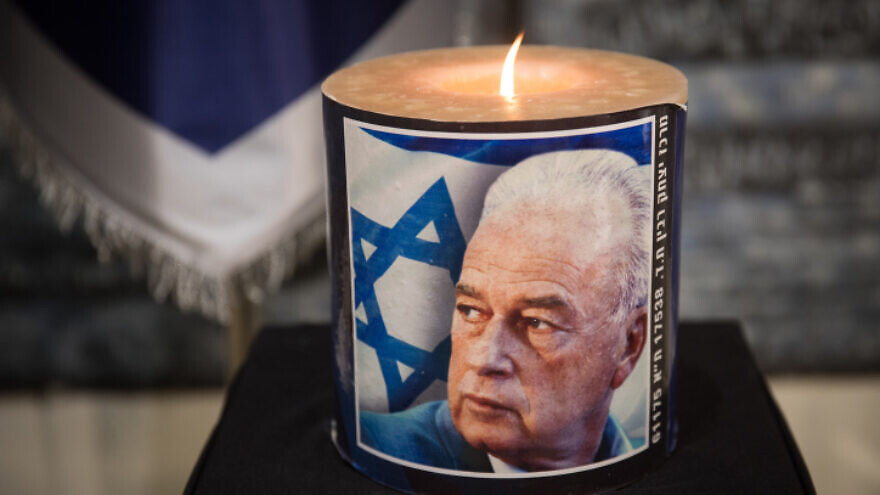 A memorial candle lit during a ceremony commemorating the 24th anniversary of the assassination of Israeli Prime Minister Yitzhak Rabin, at the president's residence in Jerusalem on Nov. 10, 2019. Photo by Hadas Parush/Flash90.
Spread the word.
Help JNS grow!
Share now:

(October 29, 2020 / Israel Hayom) Israel on Thursday marked the 25th anniversary of the assassination of Prime Minister Yitzhak Rabin with a series of commemorative events, including a special Knesset plenum session.

Speaking at the state ceremony at the President’s Residence in Jerusalem, Rivlin warned that much like in the days leading up to Rabin’s murder, hatred is once again rampant in Israel with the public torn into two opposing camps.

“The country is split like the Red Sea between two camps, and the hatred is simmering underfoot,” said Rivlin.

Rivlin called on the Israeli public to find a way “to mend the damage done to Israeli democracy in the last quarter-century,” saying that Israelis have a “responsibility to fix the rift in Israeli society.

Speaking at the special memorial session held by parliament, Israeli Prime Minister Benjamin Netanyahu pointed out that the public discourse since Rabin’s assassination has not changed.

“Some 25 years after the murder, there is still incitement to murder the prime minister and his family members,” he said.

Knesset Speaker Yariv Levin said “even now, 25 years after this terrible murder, the internecine hatred, incitement to violence and violence itself has not ceased to exist among us. The time has come for us to learn a different way.”