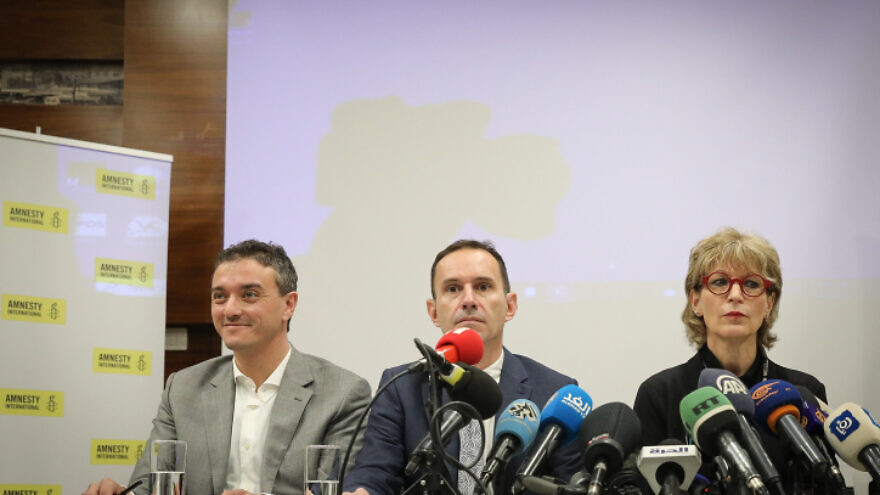 (February 2, 2022 / JNS) Israel’s government and a host of Jewish groups denounced Amnesty International’s new report condemning Israel for “the crime against humanity of apartheid.” As such reports by “human-rights groups” grow ever shriller in their denunciation of Israel, a question centers on how Israel and its allies can best counter the groups producing these reports, which carry moral authority even as they call for the extinction of the Jewish state.

“Israel should start a department, maybe in the Foreign Ministry, for dealing with charges against Israel,” Alex Safian, associate director and research director of CAMERA, told JNS, noting that there once was a department in Israel’s Ministry of Justice that, when Amnesty or similar groups would make accusations against Israel, would research the charges and work to refute them.

He hasn’t heard anything coming out of Israel’s Justice Ministry in some time and assumes that the department no longer exists. “It doesn’t have to be 100 people,” he said. “It could be five people. You could do a great deal. But you need a rapid response—to be able to quickly get the information out.”

Israel must also go on the offensive, he said. Safian suggested organizing events, like a public debate with Amnesty’s leader, would be effective and attract press, especially with a well-known name (Harvard Law School emeritus professor Alan Dershowitz, for example) representing the Israeli side. “You create an event. If they refuse, it makes them look very bad.”

Safian said Israel needs to keep its arguments simple when putting the lie to Amnesty’s charges—noting, for instance, that if Israel was an apartheid state, then how was it possible that a three-judge panel led by an Arab Israeli judge sentenced a Jewish Israeli president to prison, as happened to Moshe Katsav in 2011? “You make those kinds of simple arguments to demolish their claims and force Amnesty to back off,” he said.

‘They are totally driven by politics’

Legal adviser for NGO Monitor Anne Herzberg told JNS that “the best thing Israel can do is expose the facts—to show that that they’re making things up. I think the main thing is to expose their lies.”

“Transparency is another big issue. I don’t think anyone has revealed yet who wrote the report,” she added.

In terms of concrete action, it gets a bit trickier. Herzberg said that while the United Nations is a hostile venue, it’s possible that Israel might lessen the use of Amnesty and Human Rights Watch reports there. “Amnesty and HRW play huge roles in the anti-Israel reporting that comes out of the U.N.,” she said.

Israel could also raise objections when Amnesty appears before government committees or when governments rely on Amnesty reports to make laws. She also suggested individuals and companies could sue Amnesty should they suffer material damages from BDS campaigns as a result of Amnesty’s report, and U.S. states could be encouraged to cut ties with Amnesty as its report calls for sanctions against Israel. (More than 30 U.S. states have laws opposing boycotts of Israel.)

As for the possibility of expelling Amnesty employees—as Israel did with Human Rights Watch director Omar Shakir in 2018 for supporting BDS—Herzberg said she’s unsure that method would work “because then they get to play the martyr, and they can still pretty much write the type of reports they want to write.”

Amnesty enjoys a “privileged position” in the media, and people need to start holding them accountable, stressed Herzberg, who examined Amnesty’s work in other countries and found the same shoddy reporting. Israel shouldn’t cite Amnesty even when it might serve Israel’s interests. (Amnesty has, for example, criticized Iran.) “It would be a huge mistake,” she said. “They’re not a credible organization. I started looking into what they’re doing elsewhere. I noticed the same kind of flaws, especially when looking at armed-conflict reporting.”

“The problem with Amnesty is organization-wide. It’s not just Israel,” she said. “They are totally driven by politics. The only reason they even started talking about Afghanistan was because the United States invaded. And even then, they were really only talking about U.S. action in Afghanistan.”

However, the bias is “most acute with Israel.”

She said that it’s clear in the new report that the problem that Amnesty has with Israel is that it’s a Jewish state. “It’s OK to have a Christian country or a Muslim country, or a Buddhist or Hindu country. Only a Jewish country—that, to them, is illegitimate.”

“Under the [International Holocaust Remembrance Alliance] IHRA definition [of anti-Semitism], denying the Jews the right to self-determination is anti-Semitism. And the only way, in Amnesty’s explicit writing in this report, that Israel can rectify the apartheid issue is if they get rid of the things that make it a Jewish country, like the Law of Return,” she said.

Safian agreed that Amnesty doesn’t want Jews to have a state. In that respect, he said, Amnesty’s ideology is no different from that of Hamas. “They differ only in tactics,” he said.

Herzberg noted that the reports about Israel coming out of human-rights groups have been progressively more extreme. “The next level, I would assume, would be to completely endorse violence,” she said, noting that in the current report “they’re already talking about popular resistance.”