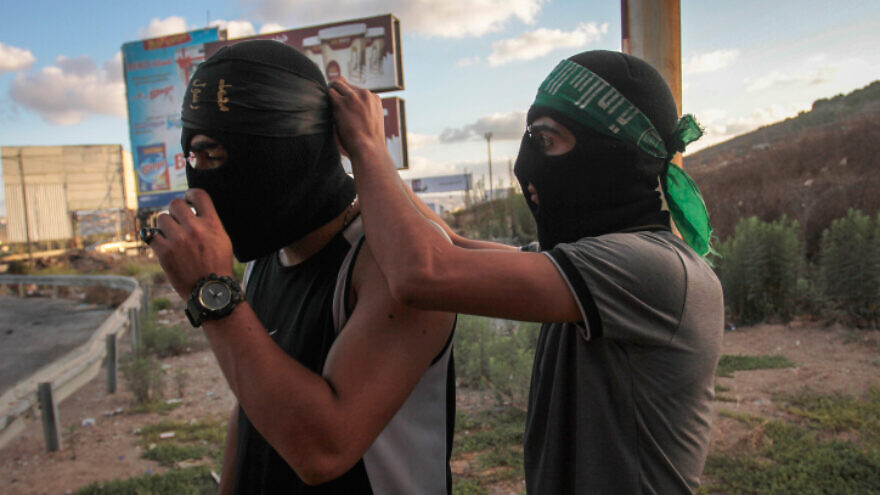 Palestinians rioting on behalf of the terrorists who escaped from the Gilboa Prison clash with Israeli security forces at the Hawara checkpoint, south of Nablus, on Sept. 11, 2021. Photo by Nasser Ishtayeh/Flash90.
Republish this article
1017 WORDS
Spread the word.
Help JNS grow!
Share now:

(September 12, 2021 / Israel Hayom) Five days into a national hunt for six Palestinian security prisoners who escaped from a jail in northern Israel, police captured two of the fugitives—Yaqoub Qadri and Mahmoud Ardah—in Nazareth on Friday night. Hours later, two others—notorious terror commander Zakaria Zubeidi and Mohammed Ardah—were apprehended in the nearby town of Shibli–Umm al-Ghanam. In both cases, Arab Israelis who encountered the fugitives reported them to authorities, aiding in their capture.

A video circulating on social media shows Israeli police shackling and placing Qadri in the backseat of a police vehicle and asking him for his name. The man, wearing jeans and a green T-shirt, calmly identifies himself and answers “yes” when asked whether he is one of the escapees. Qadri was serving two life sentences for attempted murder and bomb-planting.

“Due to the cooperation between all security organizations and the very broad deployment of police and Border Police forces on the ground, we were able to apprehend four of the six terrorists, and the hunt is ongoing,” said Israel Police Commissioner Yaakov Shabtai, who cautioned that it was still too early to celebrate the end of one of the more embarrassing chapters in Israel’s security history.

Shabtai called on civilians to remain vigilant and local communities to remain on guard.

The still-at-large terrorists are “desperate individuals, and we must be aware of any [suspicious] movements in the area,” the police chief continued.

Security officials were increasingly concerned that Kamamji or Nafiyat could try to carry out an attack following the arrests of the other fugitives over the weekend.

“They have nothing to lose,” an unnamed senior official was quoted saying by the Walla news site.

‘I would like to thank the Arab citizens of Israel’

“The activity has been determined and consistent, and the key to success is smooth and quiet cooperation between all those involved,” added Bennett. “Rapid information-sharing and precise division of tasks between security forces should continue, allowing maximum coverage of the area.”

Shabtai praised the civilians who he said helped lead to the terrorists’ capture. “I call on civilians, whose conduct to this point has been commendable, to continue your everyday lives but also be on alert for anything suspicious. We will respond quickly to any emergency call and any report to detain the terrorists who are still on the run,” he said.

Public Security Minister Omer Bar-Lev also praised Israel’s Arab citizens, who he said helped lead to the capture of the fugitives by reporting them to the police.

“Alongside the compliments to the Israel Police and security forces for their actions thus far—and without ignoring the fact that the mission is still not completed—I would like to thank the Arab citizens of Israel who aided in the apprehension of the terrorists,” Bar-Lev wrote on Twitter.

“For four days the fugitives wandered, believing they’d find shelter and refuge among Arab Israelis, but they were mistaken. Wherever they turned for help and were identified, Arab citizens turned them away and called the police,” added Bar-Lev.

After interrogating the four re-captured terrorists, police and Shin Bet security service investigators concluded that they had had no accomplices on the outside, or assistance from within Gilboa Prison, Channel 12 reported on Saturday night. The report said that the escaped prisoners may have received minor assistance from passersby, such as offers of rides or clothing, none of which was premeditated.

The four men were brought to the Northern District Court in Nazareth on Saturday night for their first hearing following their capture. Prosecutors accused them of having planned to conduct a major terror attack following their escape, a crime with a possible sentence of 15 additional years in prison.

The four captured fugitives will likely be kept in solitary confinement following their capture. Their remand was extended by nine days.

‘Deterrence must be restored’

Meanwhile, terrorist prisoners from the Fatah organization said that they would launch a hunger strike due to the punitive measures imposed on them by the Israel Prison Service.

In a letter to the P.A., they said that all the prisoners had agreed to go on a hunger strike starting this Friday.

Bezalel Smotrich, chairman of the Religious Zionist Party, responded to the prisoners’ threat by saying: “This moment is a test in which the State of Israel must not yield and must not blink. Let them starve to death. We manage the prisons and we dictate the conditions, not the terrorists. And the conditions must be much stricter and more severe. And if an uprising inside the prisons leads to riots outside, the IDF will severely suppress them. The deterrence must be restored.”

Shortly after the arrest of Qadri and Mahmoud Ardah, thousands of Palestinians violently protested across Judea and Samaria and clashed with IDF troops throughout the day. A rocket was also launched from the Gaza Strip and was intercepted by the Iron Dome missile-defense system. The IDF responded with an airstrike against a Hamas military facility.

Hamas spokesman Fawzi Barhoum said that “the arrest of the heroic prisoners is another round in the open and ongoing battle with the occupation. What happened strengthens the Palestinian people to continue the struggle against the occupation and support of prisoners.”

Palestinian Islamic Jihad threatened retaliation if any harm comes to its operatives jailed in Israel or to the fugitives.

The Gilboa Prison break is one of the worst jailbreaks in Israel’s history. The initial investigation has already exposed major flaws in the Israel Prison Service and set off days of angry finger-pointing and calls for a commission of inquiry.