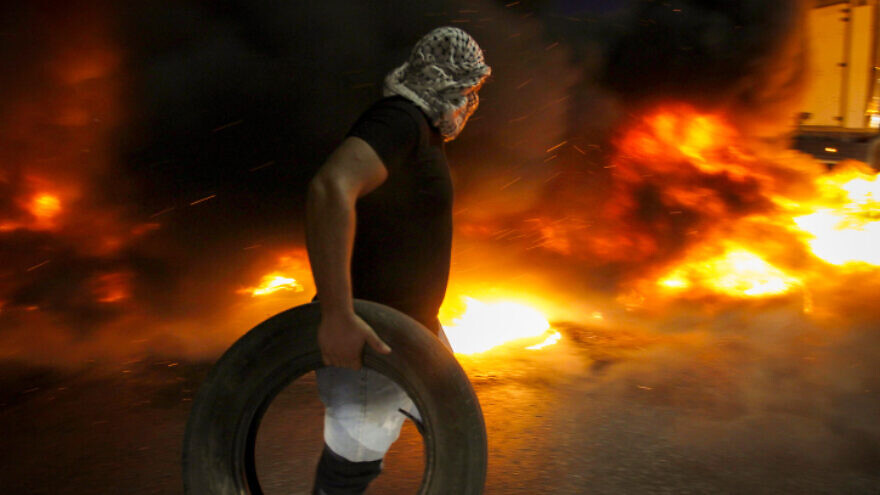 Palestinians demonstrate at the Israeli Hawara checkpoint near the city of Nablus and clash with Israeli security forces in support to the escape of the six Palestinian prisoners from the Israeli prison of Gilboa on Sept. 8, 2021. Photo by Nasser Ishtayeh/Flash90.
Republish this article
1273 WORDS
Spread the word.
Help JNS grow!
Share now:

(September 9, 2021 / JNS) The dramatic escape of six Palestinian terrorists from Gilboa Prison in northern Israel on Monday carries the potential of a broader security escalation, a former defense official has cautioned.

Col. (res.) David Hacham, a former Arab-affairs adviser to seven Israeli defense ministers and a senior research associate at the Miryam Institute, told JNS that the breakout could lead to a chain of incidents and an escalation dynamic, although this is not a certainty.

He recalled a highly relevant precedent from the 1980s. In May 1987, six senior Palestinian Islamic Jihad (PIJ) security prisoners escaped from an Israeli prison in the Gaza Strip. In October of that year, a gun battle between Israeli security forces and five of the escaped prisoners erupted in Gaza’s Shejaiya neighborhood district. The cell’s members were killed, and an Israeli Shin Bet member, Victor Arajwan, was also killed in the firefight.

The PIJ to this day considers the incident to be a catalyst for the start of the First Intifada, said Hacham.

In Monday’s escape, five out of the six prisoners are PIJ terrorists convicted of taking part in deadly attacks on Israelis, while the sixth is the former commander of the Fatah-aligned Al-Aqsa Martyrs Brigade in Jenin, Zakaria Zubeidi.

All six are from the West Bank city of Jenin, which lies just across the Green Line from Gilboa Prison.

“The 1987 escape was a catalyst event ahead of the First Intifada, and today, this event also has the potential to be that type of event,” said Hacham. “Should the prisoners be killed in a firefight, this could boost the already high levels of motivation among PIJ, Hamas and Fatah-affiliated organizations in Judea and Samaria,” said Hacham, noting that this does not include the Palestinian Authority’s security forces, which maintain daily coordination with the Israel Defense Forces.

Hacham assessed that it was unlikely that the P.A. would play a role in helping Israel capture the escaped prisoners, due to the fact that security prisoners are considered to be a consensus issue of paramount importance in Palestinian society.

“The word ‘intifada’ is in the air,” said Hacham. “The escape is being perceived by Palestinians as a humiliation to Israel, just as it was in May 1987. As an event that underlines Israeli vulnerability. The event joins the incident in which 21-year-old Border Police Sgt. Bar-El Hadaria Shmueli was shot dead on the Gaza border.” 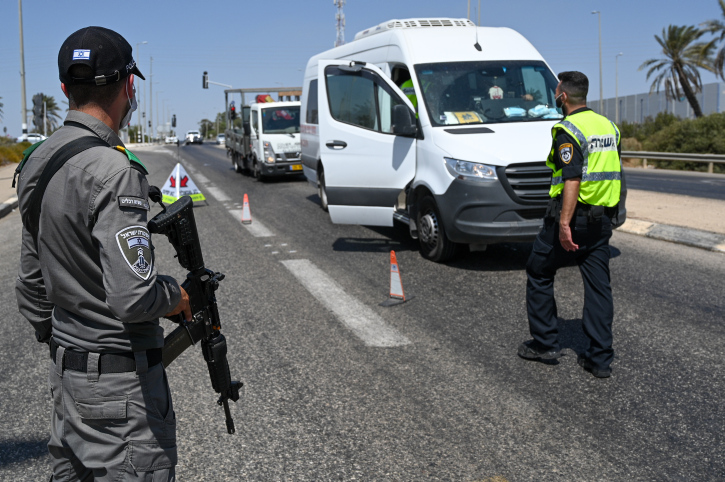 Israeli police officers, reinforced by Border Police fighters, set up a roadblock at the Jezreel junction on Road 60 that leads to Jenin, in the search for six Palestinian prisoners who escaped the Gilboa Prison days earlier, Sept. 9, 2021. Photo by Michael Giladi/Flash90.

The escape also strengthens the status of PIJ as an armed faction that is at the forefront of conflict with Israel. “In Gaza, Hamas runs the Strip, but PIJ is even more virulent and ideological than Hamas is. It has no real political component. It is exclusively a terrorist-military force,” explained Hacham.

The scenario of a violent apprehension of the escaped terrorists might not only trigger violence in the West Bank, but is likely to do so in Gaza, said Hacham, leading to new arson balloon attacks on Israeli communities and possibly rocket attacks as well.

Such a sequence of events could cause “regional escalation,” he added.

While Hamas and PIJ share a command center in Gaza, “sometimes PIJ acts independently without coordinating with Hamas,” said Hacham.

‘One of many prominent failures’

“When I heard of the escape, it immediately took me more than 30 years back to 1987, in the months before the First Intifada,” said Hacham.

The only escaped security prisoner not killed in the October 1987 firefight was a terrorist named Imad Saftawi, the son of a senior Fatah member (himself later slain in 1993 in an internal Fatah power dispute). Saftawi, who was convicted of killing an Israeli Military Police officer, escaped to Egypt and from there made his way to Yasser Arafat’s PLO headquarters in Tunis.

At that time, prisoners were able to dislodge bars on their cell, climb over the barbed wires and perimeter wall, and escape the facility under the cover of darkness. The Shin Bet intelligence agency led the manhunt. Its intelligence enabled the IDF to plant an ambush for the cell in Gaza’s Shejaiya neighborhood.

One central difference between the 1987 escape and Monday’s incident is the fact that in 1987, the cell escaped into Gaza immediately, which was a “familiar, supporting environment, into which they could vanish instantly,” noted Hacham.

Hacham is in little doubt that the six escaped terrorists from Gilboa Prison received outside assistance, and that they likely walked a few kilometers before a getaway vehicle awaited them. 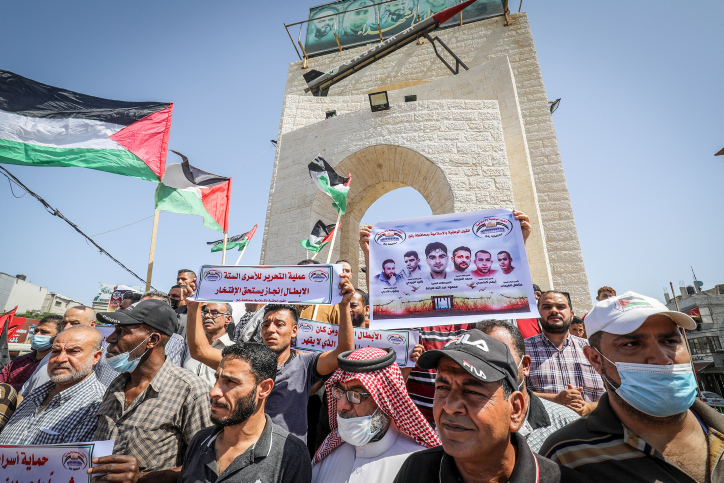 Palestinians demonstrate in the city of Rafah, in the southern Gaza Strip, in solidarity with six escaped prisoners from Israel, Sept. 9, 2021. Photo by Abed Rahim Khatib/Flash90.

“I assume some of them are still in the area,” he said, assessing that some could try to cross the Green Line into the West Bank or the international border towards Jordan. Some reports speculated that they would seek to reach Lebanon.

“It will be hard for them to get into Gaza. For now, they will probably look for a hideout and seek to vanish from the radar, to evade the Shin Bet,” said Hacham, who also advised commanders of the IDF’s Southern Command.

The terrorists could potentially be hiding in Jenin’s refugee camp, which in recent days has seen PIJ gunmen hold marches and displaying their firearms in a warning to Israel against conducting raids in the area.

Hacham noted with concern the “massive outpouring of euphoria in the territories.”

He noted that the failure by the Israel Prisons Service to block cell-phone signals in the prison compound is “one of many prominent failures.” That failure likely allowed the plotters to coordinate their plans without outside helpers.

“This is a serious failure on the part of the IPS. But it projects onto the full Israeli defense establishment,” said Hacham.

“This is the reoccurring theme in how Palestinians are describing the event,” he continued. “People I speak into Ramallah are calling it a ‘heroic Palestinian operation,’ which has exposed Israeli security forces. Three of the terrorists were designated high-risk escape candidates. Zubeidi was a central figure from the Second Intifada. The group includes two PIJ members who are brothers. All of these were in a single cell. This looks problematic.”

The escape operation likely involved “many months of detailed planning and preparation,” said Hacham, including the tunnel digging and preparing the escape opening beyond the prison wall. Someone had to wait for them on the outside and help them find a hiding place.”

The multiple failures by the IPS in gaining intelligence about the tunnel and in adequately monitoring the activities of high-risk security prisoners were joined by negligent search activities, likely due to prison guards who did not wish to “stir the pot” and risk too much violence, he said.

The decision to incarcerate the terrorists so close to their home city of Jenin also needs to be scrutinized, he added.

“This is seen as an operational achievement and a morale boost for Palestinian ‘resistance’ organizations. They don’t only view it through the narrow lens of an escape from prison,” stated Hacham. “For Palestinians, it is a source of pride. There is now a sense of victory over the ‘Israeli war machine,” and all Palestinian factions are issuing their congratulations, not only the Islamists.”

According to Hacham, the Israeli pursuit will take two main forms. The first is at the field level, involving significant numbers of police, Border Police and IDF personnel scanning the ground and searching for escape routes, as well as clues to their location.

“The second part is the intelligence front,” he said. “The Shin Bet will focus this effort, which will be aimed at locating, surveillance and utilizing all means to get hold of reliable, precise intelligence on the circumstances of the escape and hideout locations where they could have ended up.”