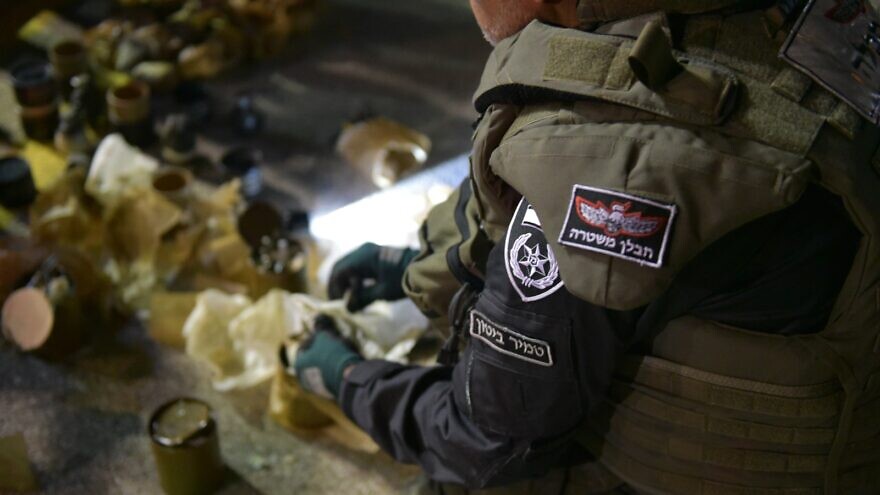 (April 26, 2022 / JNS) Israeli security forces thwarted an attempt on Monday night to smuggle 100 grenades into the country from Lebanon, the Israel Police announced on Tuesday. The grenades, which were of the fragmentation type, were likely intended for use in terror attacks, according to police.

Israeli military spotters detected suspicious activity near the border fence and alerted a police border patrol unit that was in the area, police said in a statement. During a search of the area, the officers found a bag containing the grenades, as well as a pair of firearms.

The smuggling attempt, along with other recent attempts, bore the hallmark of Hezbollah involvement, police said.

The Lebanese Shi’ite terror group “is working through Israeli criminals to bring weapons into the territory of the State of Israel,” the statement said. “Hezbollah takes care of the acquisition of the weapons, and ensures that some of them will be reserved for terrorist activities. In this way, it tries to build an infrastructure for terror attacks within the state,” it continued.

This was the first time fragmentation grenades had been seized, police noted, adding that they were likely intended for use in crowded civilian areas.

Since the start of the year, Israel has intercepted 148 handguns, 23 assault rifles, and narcotics worth millions of shekels at the country’s borders, according to police figures.

On Monday, the police and the Israeli military announced that they had thwarted an attempt to smuggle a large shipment of weapons into the country from Jordan.

One suspect, a resident of Jericho, was arrested in connection with the incident, according to police.