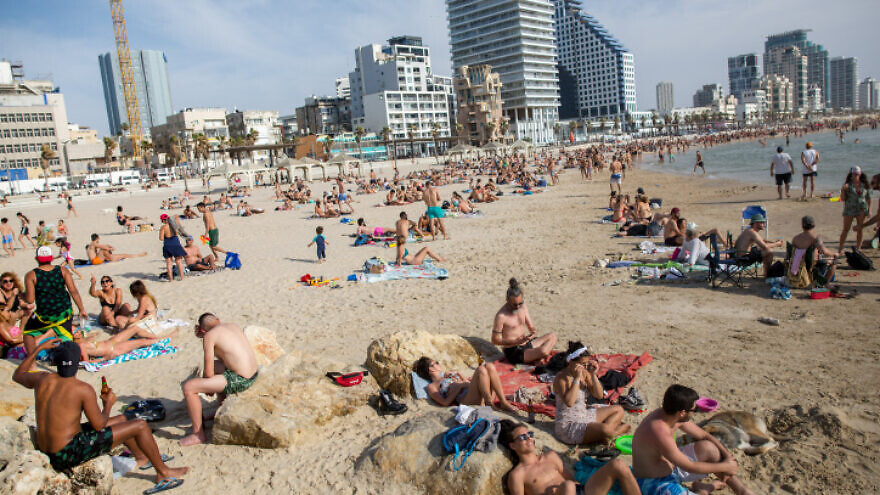 Israelis enjoy the beach in Tel Aviv as temperatures rise to 40 degrees Celsius (more than 100 degrees Fahrenheit) in some parts of the country on May 16, 2020. Photo by Miriam Alster/Flash90.
Spread the word.
Help JNS grow!
Share now:

(March 18, 2021 / Israel Hayom) Israel is the most resilient country in the Middle East, according to a study published on Wednesday by the Institute of Economics, Society and Peace in the Middle East Studies at the Western Galilee Academic College.

The study ranked Middle East countries based on six main criteria—economic, social, gender equality, the degree of openness to globalization, ethnic variance and religious variance—using quantifiable figures from sources such as the World Bank.

Based on these criteria, researchers from a wide range of fields found that Israel is the strongest country in the region, followed by Greece, Cyprus, Turkey and the United Arab Emirates. The countries at the bottom of the list are Jordan, Syria, Sudan and Yemen. The strength index does not account for military might, rather which reflects the degree of overall welfare among the people of each country.

In terms of economics, Israel ranked fifth, behind Qatar, Turkey, the UAE and Saudi Arabia, in descending order. Israel also ranked fifth in the degree of openness to globalization, behind Turkey, Greece, Cyprus and Iran. Economics might take into account factors such as total Gross Domestic Product, GDP per capita, population size, the ratio of children and elderly relative to the size of the civilian workforce and other measures.

As for social strength, Israel, as one of the only democracies in the Middle East, ranked first by a wide margin over the other countries, the vast majority of which are ruled by totalitarian regimes or monarchies.

Western Galilee Academic College president Professor Nissim Ben-David said: “The present study is the first of its kind and is unique, because it helps us identify the balances of power and the strengths and weaknesses of the countries in the Middle East, Israel among them.”

According to Ben-David, this initial study lays the groundwork for future research seeking to gauge Middle Eastern countries’ readiness for peace, and that will identify the factors facilitating and blocking the implementation of sustainable peace between Israel and its neighbors.