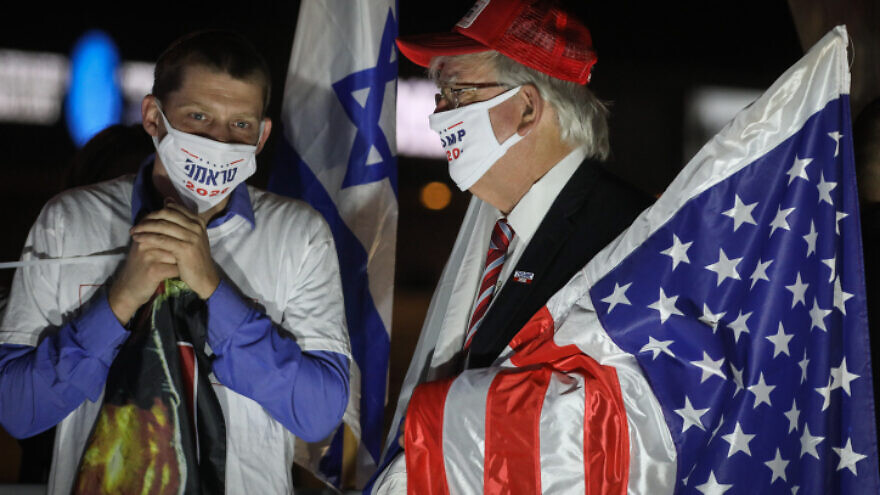 (November 16, 2020 / JNS) A small group of Israelis living in the United States gathered on Election Night in Pasadena, Calif. They were in the country as they, or their spouses, were studying at the California Institute of Technology (Caltech). One brought a television, another brought the snacks, and each brought their own opinion.

As the night got longer, expecting a result that night, they were let down the confusion for the world’s greatest democracy. “Israel is very close to America,” said Arial Kahan, who is in the United States for his wife’s studies and is working remotely at an Israeli law firm, “and the election result will automatically have some kind of effect on this relationship.”

While they were waiting, watching various television stations, they felt that the elections were similar to those back home. “The environment [was of a] big fight, it is not like a regular election. It is also something that you see in Israel. It should not be like that; elections should be more relaxed and civil,” said Kahan.

He and the others, who as Israeli citizens could not vote, echoed this sentiment in interviews with Israelis across the United States.

In a synagogue in the heart of the Crown Heights neighborhood of Brooklyn, N.Y.—comprised of an equal amount of Israeli and French expats, and Americans—when discussing the elections, the tensions were high. The Israelis there had strong words for those who voted for Democratic presidential candidate Joe Biden.

While Shmulik Schechter referred to them as bogdim (Hebrew for “traitors”), another called them tipshim (“stupid”). They noted that U.S. President Donald Trump recognized Jerusalem as the capital of Israel, moved the U.S. embassy there from Tel Aviv, recognized sovereignty over the Golan Heights, helped broker normalization deals between three Arab countries and Israel, and, most recently, recognized that Israeli settlements in Judea and Samaria were not illegal.

Schechter said he didn’t vote for Trump per se, but rather, “I don’t want Biden to be elected.” The issue, he added, is not the president-elect, but rather who he surrounds himself with.

Naomi Eisenberg, who arrived in the United 32 years ago as an athlete, echoed this sentiment, saying only Trump would be good for Israel. “Trump is better for Israel. The radicals are not good people for Israel for all.”

When she gathers with her friends in person or on their chats, there are no Biden supporters. Under Biden, “it is not going to be good for Israel. They are going to reinstate the Iranian deal. Israel will need to be worried about nuclear weapons.”

“A very big consideration I take when voting is Israel is to see how good he is for Israel.”

Ahead of the election, polls found significant support for Trump among Israelis.

For example, an i24 News poll found that 63 percent believe that Trump would be “better for Israel” than Biden. Nevertheless, a post-election survey conducted by the Ruderman Family Foundation among Israelis found that 91 percent believe that Biden will support Israel; however, 73 percent expressed some degree of concern with the “continued distancing between Israel and American Jews” given the discrepancy between the Israeli government and popular support for Trump and American Jewish support for Biden.

In New York, Itzik Kasovitz said that most of his Israeli friends feel that Trump is the best for Israel. “A very big consideration I take when voting is Israel is to see how good he is for Israel, and this is the person I am voting for.”

The previous administration, he continued, were not true friends, although he acknowledged that weren’t Israel’s enemy either. However, Trump proved to be a friend of Israel, said Kasovitz; “he did everything to keep us hopeful that he would stand with us if our enemy would strike, he would fight with us.”

In the same vein, he added that Biden and his running mate, California Sen. Kamala Harris, won’t be so bad for Israel. What is bad, he believed, is the tone and rhetoric of the current political climate.

What is happening in the United States has had an influence on the way politics is being played out in Israel, he said. “Unfortunately, this trend is going on in Israel, and this is what frightens me.” While in the United States, he said, “things will not fall [apart], in Israel, if things continue like this [over there], we will be in real physical danger.”

Certainly, while some Israelis also rooted for Trump because of his strong relations with Israeli Prime Minister Benjamin Netanyahu, like the general American Jewish population, a good portion also favored issues like social justice, racial tensions, climate change, and, of course, all of the copious issues related to the ongoing coronavirus pandemic.

‘Great experience to vote in an American election’

As in any society, many Israeli expats say that Israel is not their top priority when voting in the American elections. “I was thinking the economy,” says Kobi Lahav, a real estate broker in New York City, who voted for Biden, “world relations, to see how the United States is leading with all the things that are coming.”

He says that perhaps they need to think in different terms when it comes to American politics and Israel: “Is Trump good for Israel, or good for the right-wing in Israel?”

“This country gave me an opportunity that I would not have in Israel.”

Those among his Israeli friends who do support Trump, he said, he feels that it’s because of tax policies. Kahan in California says that he gets that feeling from Israelis he meets. “They came to America not to pay taxes like you pay in Israel,” where rates are much higher. Others interviewed said that the status of law and order is very high on their agenda. Illegal immigrants, too, were a concern, as well as an issue they felt Trump was handling.

What all of the Israelis, who are today American citizens, agreed with is that the United States has given them opportunities they never would have had back home. “This country gave me an opportunity that I would not have in Israel,” said Kasovitz. “Maybe I would have a different life, maybe even a better life [there], but the opportunity is greater here.”

Being able to vote in the United States, added Lahav, is humbling.

A vote in Israel, he said, “will never change anything. The hopelessness when you vote in Israel is not a good feeling. Here, it feels good—the policies that [a president] will enact will affect the world. It is a great experience to vote in an American election.”