Israeli Border Police stand guard near Damascus Gate in Jerusalem on April 18, 2021. Clashes erupted after police erected barriers preventing people from congregating on the steps in the plaza outside the gate. Photo by Yonatan Sindel/Flash90.
Spread the word.
Help JNS grow!
Share now:

(May 27, 2021 / Israel Hayom) The recent clashes between Jewish and Arab Israelis in the country’s mixed-population towns were worse than the public believed and bordered on anarchy, Border Police Commissioner Maj. Gen. Amir Cohen said on Wednesday.

The violent riots earlier this month—the worst in decades—were “the stuff of nightmares,” he said, adding that he fears the subsequent come will prove to be an illusion.

Cohen, who assumed command of the Border Police three months ago, admits that law enforcement should have increased its presence in flashpoint areas earlier than it did, but added that even if it had, that would not have been enough.

“The police are not to blame for the riots nor for the vandalism or brutality,” he said of the shocking events in Lod, where clashes were so severe the city had to be placed on emergency lockdown. “But I agree that in the first hours the results were not good.”

One has to look at the bigger picture, he said.

“That day, tens of thousands of rioters flooded the streets of Lod, Akko, Jerusalem, Haifa, Jaffa, Bat Yam and Umm el-Fahm, and even if the police had had hundreds of additional officers, unfortunately, we still would not have been able to be everywhere.”

The Israel Police and Border Police, he said, were simply unable to cover such “intense” events over such a wide area. “It was impossible given the existing manpower,” he said.

Indeed, the May riots required the activation of 20 companies of Border Police reservists—a first in the country’s history. 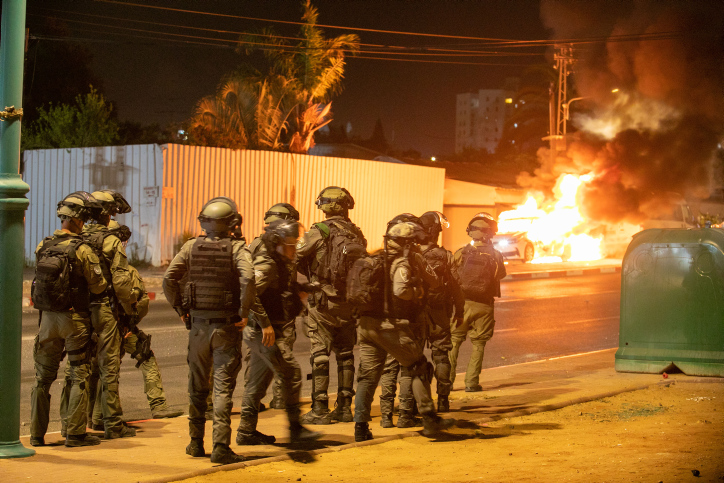 Israeli Police in Lod, during violent rioting by the city’s Arab residents, May 12, 2021. Photo by Yossi Aloni/Flash90.

“We managed to put out this fire in Israeli society in a very, very short time. I won’t go into who is to blame and what preceded these events, but it is a state-level event. It wasn’t a police-level event that we could have solved by force even if we had deployed 5,000 policemen,” he said.

While admitting that early handling of the riots was “poor,” Cohen stressed that “it took a little time, but we took control of the incident. We arrested more than 1,500 suspects, and we continue to do so with nightly arrests of relevant suspects.”

One of the things that most took him aback during the riots, he said, was the hatred and violence against the police.

“I’m concerned by the physical violence that was directed at us. The pursuit of friction with us; it was never this intense before. Things need to be put on the table: There’s a nationalist element here that is very troubling,” he said.

“We’re not the Israel Defense Forces, which faces a known, familiar enemy—we’re police officers facing our fellow Israelis. I never expected an Israeli citizen, even an Israel Arab, to point a gun at law enforcement,” he said.

“I saw mobs storming innocent bystanders. I’m concerned that the residents of these [mixed] cities will take the law into their own hands,” he added.