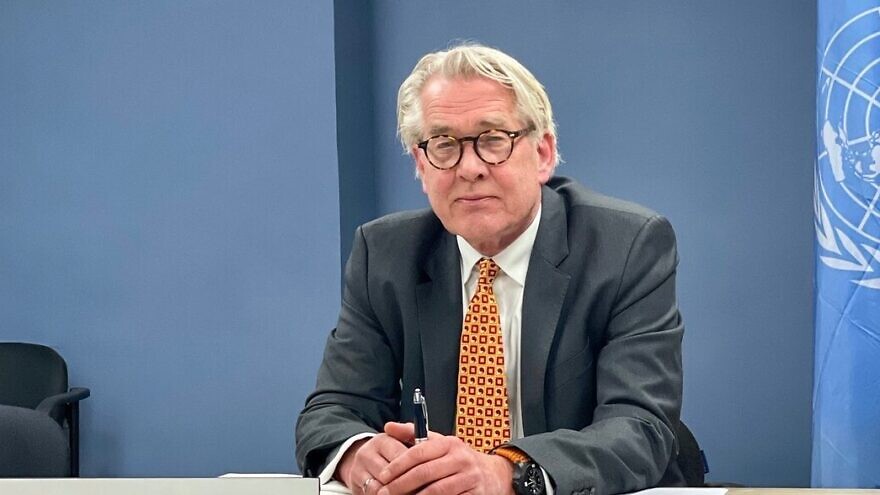 (December 4, 2022 / JNS) Israeli Defense Minister Benny Gantz on Saturday condemned comments made the previous day by a senior United Nations envoy to the region following a terrorist attack near Nablus.

Tor Wennesland, the U.N. Special Coordinator for the Middle East Peace Process, tweeted on Friday: “Horrified by today’s killing of a Palestinian man, Ammar Mifleh, during a scuffle with an Israeli soldier near Huwarra in the o. [occupied] West Bank. My heartfelt condolences to his bereaved family. Such incidents must be fully and promptly investigated, and those responsible held accountable.”

Horrified by today’s killing of a Palestinian man, Ammar Mifleh, during a scuffle with an Israeli soldier near Huwarra in the o. West Bank. My heartfelt condolences to his bereaved family. Such incidents must be fully & promptly investigated, & those responsible held accountable.

Mifleh, armed with a knife, had attempted to break into the vehicle of an off-duty IDF officer, who shot and wounded him, according to police. The terrorist then spotted a Border Police team patrolling the area and attacked them, wounding one. The company commander charged the assailant and a struggle ensued, in which Mifleh attempted to snatch the officer’s firearm, at which point the officer shot and killed him, police said.

Video footage from the scene appears to show two other Palestinian men joining the struggle prior to the shooting.

Responding to Wennesland’s comments, Gantz on Saturday praised the Border Police officer that neutralized the terrorist, and called out Wennesland’s statement.

“I fully condemn the attempts to present the incident in a false and manipulative manner, and the statement by the U.N. envoy to the Middle East against the officer, who functioned with determination and professionalism,” said Gantz.

“The officer who neutralized the terrorist and all IDF and Border Police combat personnel have full backing to continue to act against terrorism and to preserve the security of Israeli citizens,” Gantz stated.

“Within seconds, the team understood that this was a terror attack, and strove to engage the terrorist, who in the end was neutralized with gunfire before being able to harm Israeli civilians,” he said.