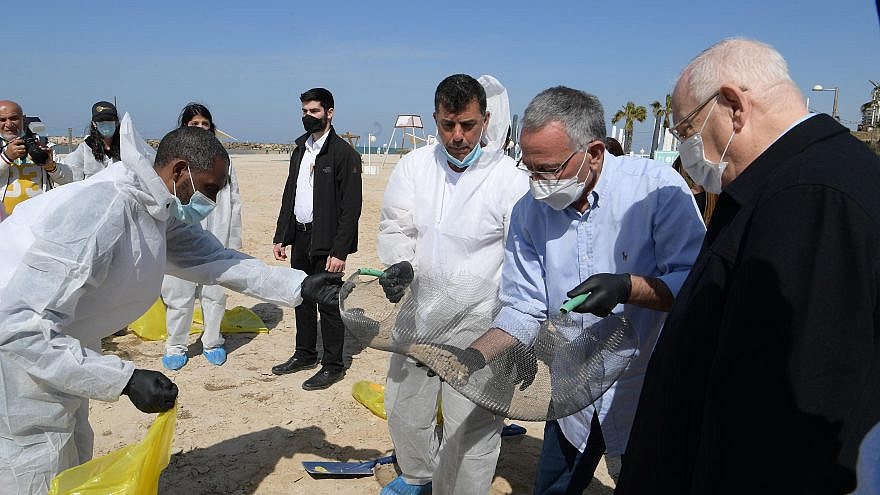 (February 22, 2021 / JNS) In a surprise move, a Haifa court on Monday imposed a seven-day gag order on the ongoing investigation into the massive oil spill that devastated Israel’s Mediterranean coast over the weekend, according to Hebrew media reports.

The order prohibits the publication of any details of the investigation, including the name of the ship, company or individuals involved, as well as the ship’s point of origin, destination and cargo, until Sunday.

The order followed a request from Israel’s Environmental Protection Ministry, which claimed in its appeal to the court that publication of these details could jeopardize what it said was a delicate investigation with international dimensions. The ministry was joined in the request by the National Unit for the Protection of the Marine Environment and the Green Police.

The ministry estimates that dozens of tons of oil spilled into the sea late last week due to stormy weather and that close to 160 kilometers (99 miles) of Israel’s shoreline have been affected. The ministry has asked the public to refrain from visiting the country’s beaches until further notice, warning that the tar that has washed up can be dangerous. A number of volunteers cleaning the beaches were reportedly hospitalized over the weekend after inhaling toxic fumes from the spill.

Before the gag order was put in place, Israeli media speculated that the ship belonged to a nearby friendly country, to which it has possibly already returned.

Also on Monday, Israeli President Reuven Rivlin visited an affected beach in Herzliya, where he thanked the “wonderful citizens” who came out to clean up the beaches and save animals affected by the tar.

“What we see here is an eyesore and heartache,” said Rivlin, who was accompanied by Herzliya Mayor Moshe Fadlon. “These sights are a wake-up call. We must work on a national environmental protection plan to ensure that events like this do not surprise us. It is a national duty that we must not neglect. This is the only way we can protect our children’s and grandchildren’s futures, so that they live in a safe, clean and unpolluted environment.”

The president called on all those who are able to join the clean-up effort.

“When we protect the environment, we are not only taking care of the flora, the fauna, the sea and the beaches. We are looking after our home,” he said.