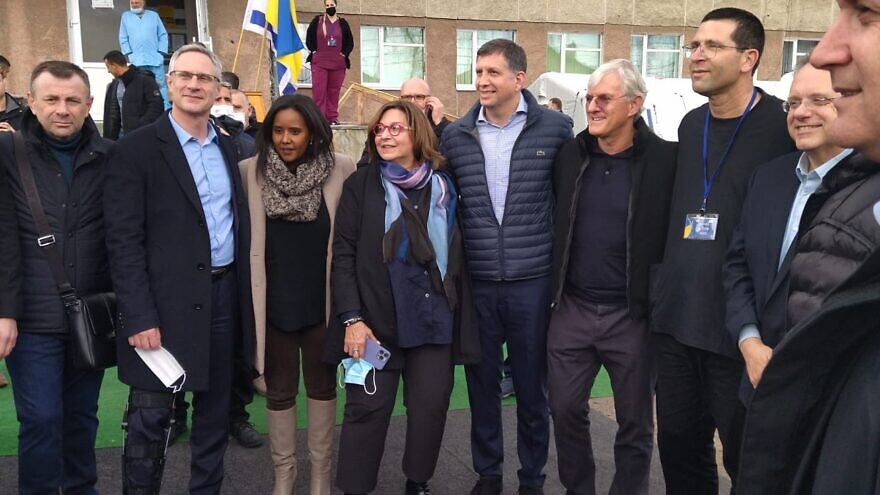 (April 7, 2022 / JNS) Israeli Aliyah and Integration Minister Pnina Tamano-Shata visited the Israeli field hospital in Mostyska on Thursday, together with a delegation of Jewish Agency and Keren Hayesod leaders.

Tamano-Shata and the delegation landed in Poland on Wednesday, where it met with Jewish refugees from Ukraine who are immigrating to Israel, according to the Jewish Agency.

The purpose of the trip is to formulate new ways to rescue Jews from the war-torn region, and also to “strengthen the cooperation and coordination between the various bodies operating abroad and in Israel in order to promote efficient absorption of olim (“new immigrants”) in Israel upon their arrival,” according to the Jewish Agency.

“It’s been overwhelming seeing the tremendous rescue and relief work our staff and volunteers are doing on the ground,” said Michael Siegal, chairman of the Jewish Agency’s Board of Directors. “Rescuing refugees, providing them with shelter, and then making aliyah possible for them is a multipronged process relying on many moving parts. I’m extremely proud of the efforts made by our Jewish Agency team who have been working around the clock since day one of this dreadful war to save Jewish lives.”

Since the Russian invasion of Ukraine on Feb. 24, as many yas 30,000 calls have been received at the Jewish Agency hotline, 400 rescue buses have been organized out of Ukraine, more than 70  aliyah flights have landed in Israel and the Agency has processed more than 10,000 olim from Ukraine and Russia, according to the statement.

Tamano-Shata is the second Israeli minister to visit Ukraine since the invasion after Israeli Health Minister Nitzan Horowitz visited the field hospital on Monday.

“We will continue to extend our hand to the Ukrainian people. This is our moral duty in the face of the brutal Russian invasion, in the face of the massacres and war crimes being carried out on this land,” said Horowitz during his visit.