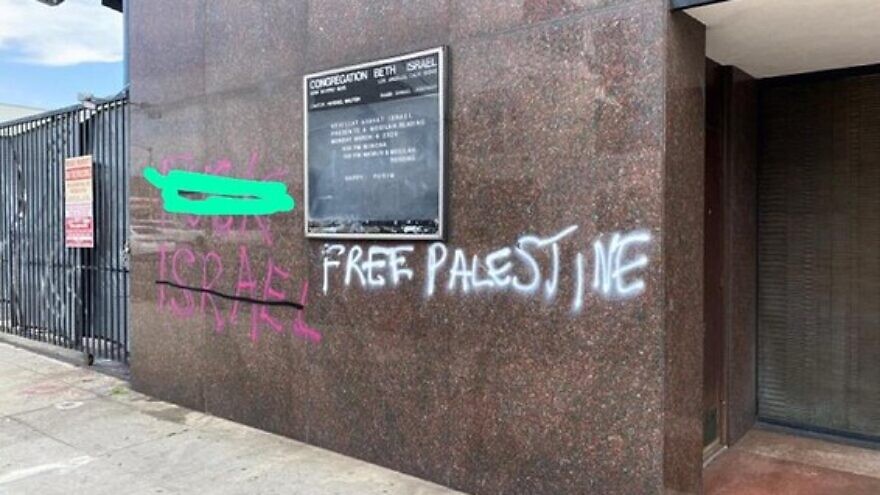 (June 4, 2020 / Israel Hayom) The riots over the killing of George Floyd have turned Eyal Dahan’s Los Angeles neighborhood into “a war zone”—and according to Dahan, some Palestinians are taking advantage of the chaos to wreck synagogues.

A number of Los Angeles synagogues have been vandalized or even destroyed during the riots, including one in Beverly Hills. According to Dahan, an Israeli living in Los Angeles, the buildings were not targeted by any of the protesters demonstrating against Floyd’s death, but rather by Palestinians who “exploited the opportunity.”

“I saw a PLO flag and them shouting to ‘free Palestine.’ I don’t think it was black protesters who did this damage,” he said.

Dahan, a clothing supplier who has lived in the United States for 41 years, told Israel Hayom the chaos is “immense.”

“The army [National Guard] is in the streets. Businesses have been burned and torn apart. [Rioters] tore down pharmacies, stole all the medicine. All the electronics stores have been destroyed. It started bad, and because the police didn’t pressure them, it got worse,” he said.

According to Dahan, the businesses that haven’t yet managed to get back on their feet from the coronavirus crisis are crashing.

“It was terror on Saturday and Sunday, the entire city was engulfed. [Monday] there was some quiet, but that night the break-ins and looting started again. … Right now, 90 percent of the demonstrators are peaceful, but the 10 percent who come after them have been looting and causing huge damage,” he said.

The National Guard deployment, he added, has been only partially effective.

“They brought in the [National Guard] and they started to patrol the big shopping malls, but the small stores, which are barely hanging on, caught it. The [National Guard] can’t arrest civilians, they can only protect certain places,” he said.

While speaking with Israel Hayom, Dahan reported a new wave of rioting and looting: “Now the looting has started again. After eight or nine at night, they start their mess.”

Dahan, who was in Los Angeles during the Rodney King riots in 1992, said that “this time, it’s completely different. I didn’t think it would happen again, I thought that the police learned a lesson about how to handle it, but it was the rioters who learned. Social media helped them form groups, split people—like platoons in a war. It’s completely organized.”