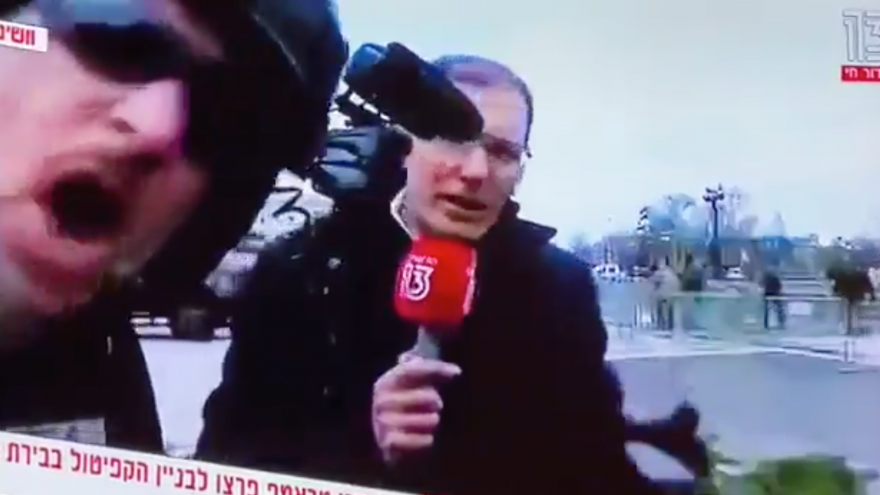 (January 7, 2021 / JNS) An Israeli journalist was harassed by a protester supporting U.S. President Donald Trump outside the U.S. Capitol on Wednesday as a mob surrounded the building—with some breaking into it—seeking to prevent Congress from tallying U.S. President-elect Joe Biden’s win.

The protester, referred to as “Marc,” can be seen in a Channel 13 news broadcast asking the reporter why Israel “continues to take American aid.” The reporter answered that it’s a “very good question” and emphasized that he doesn’t represent the Jewish state.

In front of the camera, Marc shouted, “I’m gonna get in your face now and I’ll tell you why, yid,” referring to a term that means “Jew.”

Marc then asked the reporter, “What is a goy?” The reporter responded that he didn’t know, to which the protester called him a “lying Israeli” and said that the reporter was “playing the pilpul game.”

“Pilpul” is a term used to refer to analytical or hairsplitting discussion, usually in the context of Talmudic study. The term “goy” literally translates to “nation” and is sometimes used to refer to non-Jews,” according to The Jerusalem Post.

The Anti-Defamation League denounced the incident.

“Absolutely despicable. A rioter was harassing an Israeli reporter with vicious, grotesque #antisemitism. This is sadly not shocking considering the violence we saw from extremists at the Capitol,” tweeted the ADL.

Absolutely despicable. A rioter was harassing an Israeli reporter with vicious, grotesque #antisemitism. This is sadly not shocking considering the violence we saw from extremists at the Capitol. https://t.co/Mzz4zUntiD