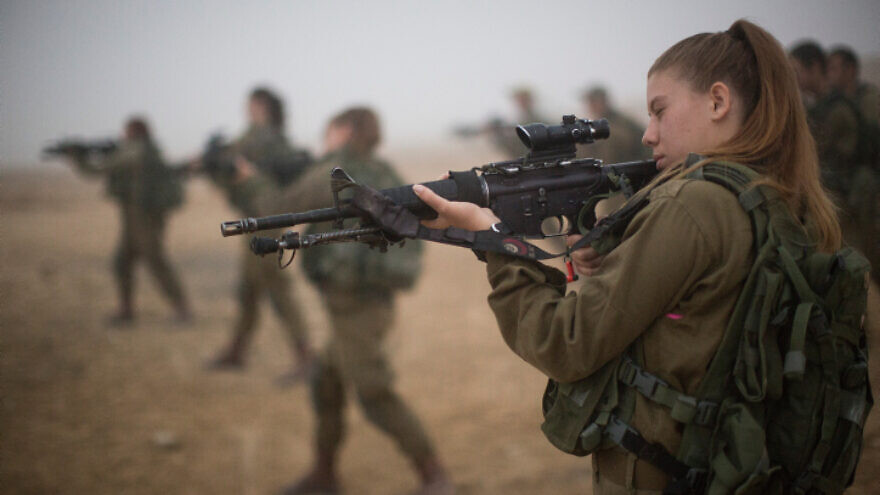 Soldiers of the IDF Bardelas Battalion prepare for urban-warfare training near Nitzanim in the Arava area of southern Israel on July 13, 2016. Photo by Hadas Parush/Flash90.
Spread the word.
Help JNS grow!
Share now:

(November 25, 2020 / Israel Hayom) The number of women in combat roles in the Israeli Defense Forces has risen by 160 percent in the past six years, it was revealed on Tuesday during a discussion at the Knesset’s Foreign Affairs and Defense Committee.

According to Brig. Gen. Amir Vadmani, head of the Manpower Directorate’s Planning and Research Department, the integration of women in the IDF is continually on the rise with women now representing 18 percent of the army’s combat roles.

Vadmani added that the scope of women in non-combat roles has dropped by 25 percent, and that this week the IDF will launch another pilot for female combat soldiers in the Armored Corps and Border Defense Force.

The discussion was also attended by Mor Lidani, who in May, along with three other pre-army recruits, filed a High Court of Justice petition urging the defense minister and IDF chief ‎of staff to allow women to try out for special-forces units.

Lidani was joined by Knesset member Merav Michaeli of the Labor Party, who lambasted the IDF’s conduct on the issue.

“Today, all of the modern armies are passing by the IDF, which is lagging behind with pathetic and pitiful arguments,” Michaeli told the committee. “The process for implementing equality of opportunity in terms of examination, selection and placement should have begun a long time ago based on the right person for the job—not the reproductive organ or gender. First of all, women need to be looked at as human beings, and then the IDF can move ahead into the modern era.”

Committee chairman Knesset member Zvika Hauser of the Derech Eretz Party concluded the meeting by saying that the army must continue eschewing discrimination between men and women.

“The IDF must aspire to let every person maximize their potential during their service, women and men alike,” he said.