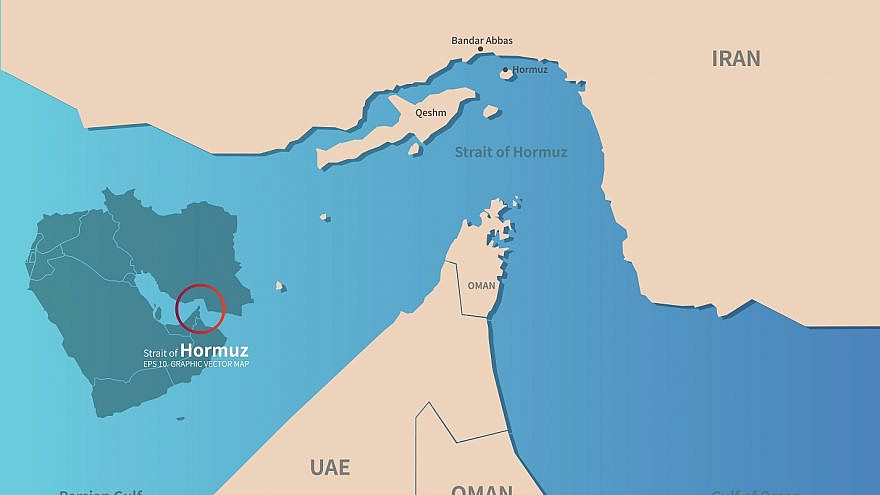 A vector map of the Gulf region and the Strait of Hormuz. Credit: tunasalmon/Shutterstock.
Spread the word.
Help JNS grow!
Share now:

(February 26, 2021 / JNS) An Israeli-owned cargo ship was hit by an explosion while sailing in the Gulf of Oman on Friday amid escalating tensions between the United States and Iran.

According to the U.K. Maritime Trade Operations, which is run by the British navy, the crew and vessel are safe after the explosion forced the vessel to head to the nearest port in the United Arab Emirates.

The vessel, identified as MV Helios Ray, a Bahamian-flagged vehicle cargo ship, is owned by a Tel Aviv-based firm called Ray Shipping Ltd., reported The Associated Press. Abraham Ungar, 74, is the owner of Ray Shipping and one of the richest men in Israel.

Ray Shipping confirmed that one of its vessels carrying a “Bahamas flag” was damaged “when an explosion was heard in the Persian Gulf near the Straits of Hormuz.”

While it remains unclear what caused the explosion, two U.S. defense officials told The Associated Press that the ship sustained two holes on its port side and two holes on its starboard side just above the waterline. In the past two years, Iran has been linked to attacks on shipping near the Strait of Hormuz, one of the world’s most strategic shipping lanes.

The United States blamed Iran for suspected attacks on two oil tankers in 2019.

The attack on the Israeli-owned vessel comes hours after America launched airstrikes on Iranian-backed militias along the Syrian-Iraqi border. Those strikes were in retaliation for a rocket attack in Iraq earlier this month that killed one civilian contractor, as well as wounded U.S. soldiers and other coalition troops.