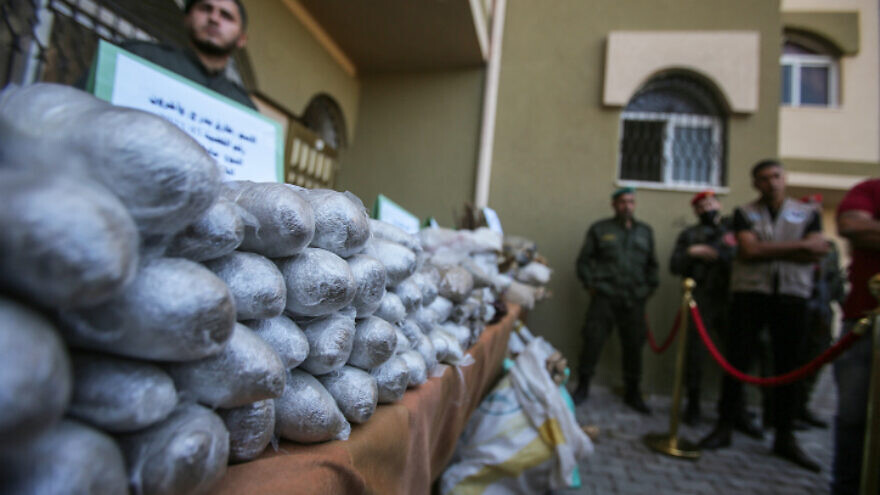 Hashish, marijuana and thousands of pills of Tramadol seized since the beginning of the year, in Gaza City, Oct. 21, 2021. Photo by Atia Mohammed/Flash90.
Spread the word.
Help JNS grow!
Share now:

(April 24, 2022 / JNS) Israeli security forces on Sunday foiled an attempt to smuggle narcotics into Israel from Egypt, seizing 200 kilograms of drugs worth an estimated 4 million shekels ($1.2 million), the Israel Defense Forces said in a statement.

IDF spotters had observed “a number of suspects” attempting to move the narcotics across the border into Israeli territory, and alerted a force to the area, the statement said. The drugs were transferred to the Israel Police, the IDF said.

The operation was the latest example of “ongoing efforts by the IDF and Israeli security forces to thwart drug smuggling attempts along the Egyptian border,” the military said.

Once largely the domain of police, the IDF has increasingly become involved in such incidents in recent years, due to concern that should drug smugglers prove an ability to reliably infiltrate the border, terrorists would be quick to follow.

The IDF is also active in thwarting drug smuggling attempts from Lebanon. On March 20, the IDF announced that, together with police and other forces, two Arab Israeli operatives suspected of smuggling and membership in Hezbollah’s terrorist infrastructure were apprehended.