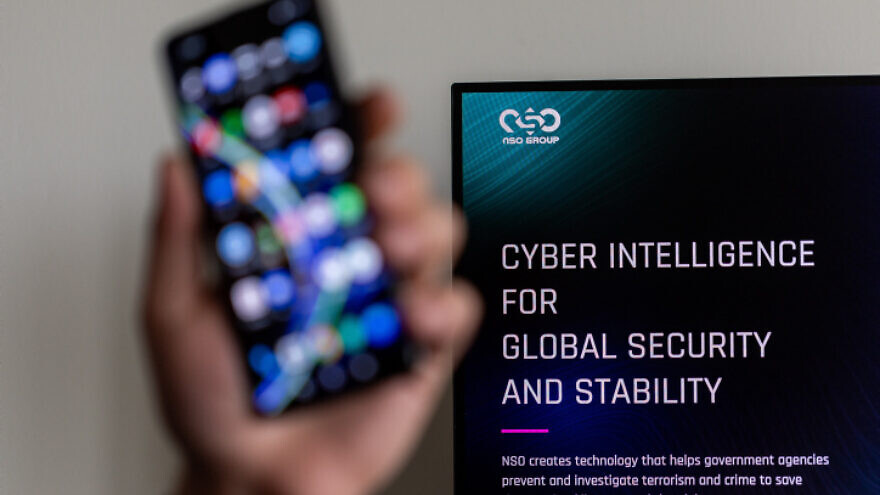 An Illustration of a man holding his phone with NSO GROUP logo on a computer screen at the background, in Jerusalem, on February 7, 2022. Photo by Yonatan Sindel/Flash90.
Spread the word.
Help JNS grow!
Share now:

(February 28, 2022 / JNS) Israel-based software firm NSO Group announced on Sunday that it has filed a defamation lawsuit against the Calcalist newspaper in connection with the daily’s reporting on alleged illegal use by the Israel Police of the firm’s Pegasus spyware.

In the lawsuit, which was filed in the Rishon LeZion Magistrate’s Court, the company is demanding one million shekels (308,840) in compensation for what it calls “another attempt to find fault with the company and its employees,” according to Channel 12 News.

Calcalist reported in January that the Israeli technology firm’s spyware had been used to hack the phones of mayors, government employees, anti-Netanyahu activists and “a person close to a senior politician.” No warrants were requested for any of the hacks, nor were they carried out under court supervision, according to the report.

The story, which was denied by the Israel Police, caused an immediate outcry, with Israeli Prime Minister Naftali Bennett saying on Feb. 7 that the claims “would not go unanswered.”

“The things that have been published, if true, are very serious. This tool [Pegasus] and similar tools are very important … in the fight against terrorism and in the fight against serious crime, but they are not intended for widespread ‘phishing’ among Israeli citizens or public figures in the country, so we need to understand exactly what happened,” said Bennett in a statement.

The following day, Bennett established a commission of inquiry that included representatives from the Israel Security Agency (Shin Bet) and Mossad intelligence agencies to investigate the allegations.

The commission published its interim findings last week, which debunked Calcalist‘s claims. The report states: “There is no indication that the Israeli police used Pegasus software in their possession, without a court order, [against] the telephone of any of the people on the list published in the media.”

According to Channel 12, In the Statement of Claim sent to Calcalist, NSO Group attacked the paper’s investigation, calling it a “unilateral, biased and false report, which was made public in circumstances that raise a real concern that its purpose is to serve completely foreign purposes to the essence of professional, responsible and impartial journalism.”

The statement went on to say that “the thorough investigation that was [carried out by the commission] pulls the rug out from under another attempt to find fault with the company and its employees, and is further proof that not every journalistic investigation with sensational headlines about NSO is based on evidence.”

The company emphasized that the goal of the suit was not monetary compensation, but “disclosure of the truth,” according to Channel 12. Any compensation awarded would be donated to charity, it said.

Calcalist now has 60 days to formulate the statement of defense.