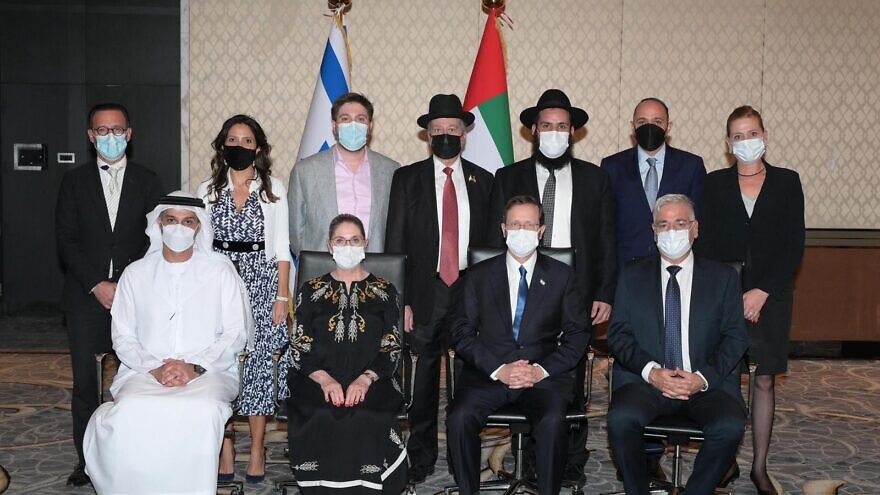 (January 31, 2022 / JNS) Israeli President Isaac Herzog and first lady Michal Herzog met on Sunday evening with Jewish community representatives in the United Arab Emirates, including a senior rabbi who told them that the UAE is safer for Jews than the United States.

The Emirati Jewish leaders updated the president about their growing presence in the region, and Herzog shared his vision for expanding the existing peace deal between the two countries.

“The dialogue between Judaism and Islam is at a fascinating point, and I very much look forward to further dialogue with Islamic countries,” Herzog told the Jewish leaders. “As you know, we have relations with quite a few, and there are plans for other countries, and I hope this will bring about a new era in relations between Jews and Muslims in our region. It all starts with the vision laid out here, which is a vision of inclusiveness, an amazing vision of inclusiveness.”

Among the participants in the meeting were Rabbi Levi Duchman, a Chabad-Lubavitch emissary who has been working in Dubai since 2014; Rabbi Dr. Elie Abadie, a senior community rabbi; and Jewish Agency representative Sarah Benchimol.

President @Isaac_Herzog and First Lady Michal Herzog met Sunday evening with #Jewish community representatives in the #UAE, including a senior rabbi who told them that the UAE is safer than the US for Jews.

The gathering was originally scheduled for 6 p.m. Israel time, but started more than an hour late, as Herzog was invited by the crown prince of Abu Dhabi, Sheikh Mohammed bin Zayed Al Nahyan, to a personal meeting at the prince’s private palace. The previously unscheduled meeting took place after a productive, two-hour diplomatic meeting.

With the Abrahamic Accords, we’ve learned that everything is possible!

How beautiful it was to welcome @Isaac_Herzog alongside leaders from our community: pic.twitter.com/hn91VdD30q

‘The government is protecting us’

Herzog is the first Israeli president to visit the UAE and see the growing Jewish community firsthand. Before the September 2020 Abraham Accords, only around 250 Jews lived in the UAE. Today, according to Abadie, that number has doubled.

“Many French, British, Canadian, American and Israeli Jews have set up homes here and many are setting up businesses here,” Abadie told JNS. He estimated that in the next three to five years, there will be as many as 5,000 Jews living in the UAE.

Moreover, since the peace treaty, an estimated 200,000 Jews have toured the country.

He said that Jews in Europe, the United States and South Africa are attacked on a near-daily basis just for being Jewish.

“We do not have that here,” said Abadie. “The UAE is absolutely, without a doubt, safer than the United States for Jews. … We know that the government is protecting us, as it is all the citizens and residents of this country.”

The leaders told Herzog about the services that the community is now striving to provide, such as kashrut services and synagogues. In addition, they said they are looking to establish a Jewish day school, mikvah, kosher bakery and pizza shop “in due time.”

“With God’s help, may you continue to go from strength to strength in building the institutions of the community, the education system, and of course synagogues and other institutions that every community has,” said Herzog. “Good luck to all of you.”

Abadie said the Jewish presence in the country is celebrated on a daily basis. Sometimes people salute him on the street, stop to say shalom or tell him how happy they are that the Jews are in the UAE.

While he feels how special it is to live there on a daily basis, “when we have the president of the State of Israel received with such a beautiful welcome and the Israeli national anthem is played in the palace, and you see all the Israeli flags flying around the palace and the airport next to UAE flag—you want to pinch yourself to see if it is reality, and it is reality.”