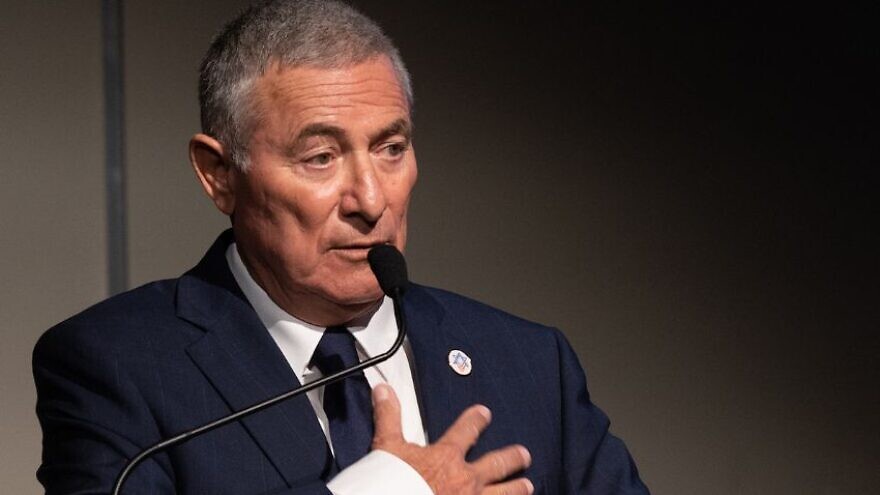 Jewish Agency Chairman Doron Almog at a meeting with The Jewish Agency for Israel's Board of Governors, Nov. 6, 2022. Photo by Maxim Dinshtein.
Spread the word.
Help JNS grow!
Share now:

(November 6, 2022 / JNS) IDF Maj. Gen. (res.) Doron Almog, chairman of the executive of The Jewish Agency for Israel, on Sunday presented his new plan to build stronger connections between Israelis and world Jewry.

Addressing hundreds of Diaspora Jewish leaders from around the world in a meeting in Israel with the organization’s Board of Governors, Almog said his plan will deepen connections between Israel and world Jewry through “joint activities.”

These include building ties between Israeli and Jewish students studying in Israel, connecting young Jews throughout the world with Israel’s high-tech sector and linking Israeli families living abroad with Jewish families in their areas.

“The flagship program that we will promote together focuses on strengthening connections between us; to deepen Israel’s relationship with every Jew, every Jewish family and every Jewish community around the world. We must not lose any of them,” Almog said in a statement put out by the Jewish Agency.

Almog said that young Israeli emissaries will be given an expanded role amid rising anti-Semitism and the anti-Israel efforts of the Boycott, Divestment and Sanctions (BDS) movement.

He noted that thousands of Israelis living abroad could take part in the plan, from former IDF officers to academics.

Almog also said that The Jewish Agency will work with the Israeli government to recognize Diaspora Jewish communities in official Israeli state ceremonies.

The plan will also help those who’ve already immigrated to Israel through cooperation with cities, government ministries, and businesses.