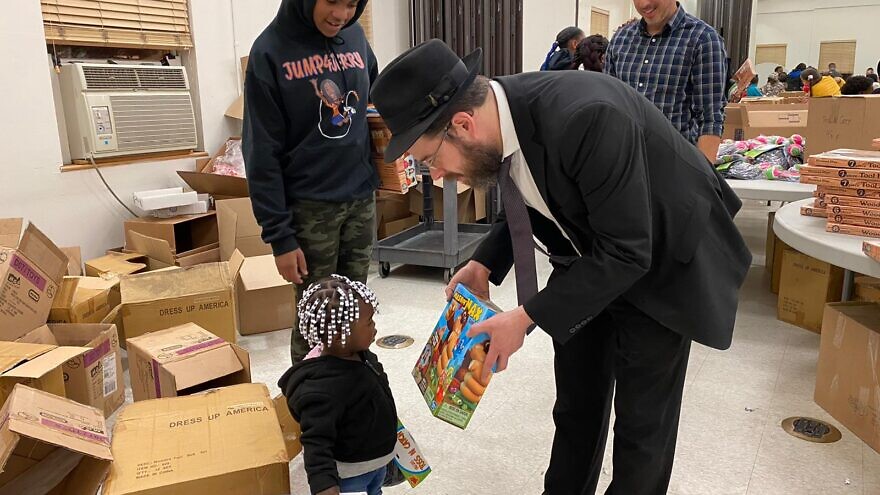 Black and Jewish volunteers in the Jersey City neighborhood of Greenville on Monday partnered up on a charity drive to deliver food and other goods to hundreds of local families in need. Source: Chesky Deutsch via Twitter.
Spread the word.
Help JNS grow!
Share now:

(December 27, 2019 / JNS) African-American and Jewish volunteers in the Jersey City neighborhood of Greenville on Monday partnered up on a charity drive to deliver food and other goods to hundreds of local families in need.

Trucks full of pretzel challah, soup mix, hummus, turkey, chocolate, toys and more, provided by nearby Jewish vendors, were handed out to families lined around the block.

Just a few blocks away was the site of a deadly shooting at a Jewish-owned kosher supermarket on Dec. 10.

The idea for a charity drive came was proposed during an informal meeting last week between Jewish community leaders and local Jersey City officials, reported JTA.

By Dec. 23, with the help of the Jewish soup kitchen and food pantry Masbia, a network of soup kitchens, kosher-food vendors, Jewish-owned toy companies and a nonprofit from Brooklyn, N.Y., teamed up to gather supplies for those in need.

“We’ve been in communication since the tragedy on Dec. 10 trying to find ways to work together as a community,” said Pam Johnson, one of the drive’s organizer and the leader of the Jersey City Anti-Violence Coalition Movement. “We wanted to make sure that we sent a clear message of solidarity, that we are all in this together.”