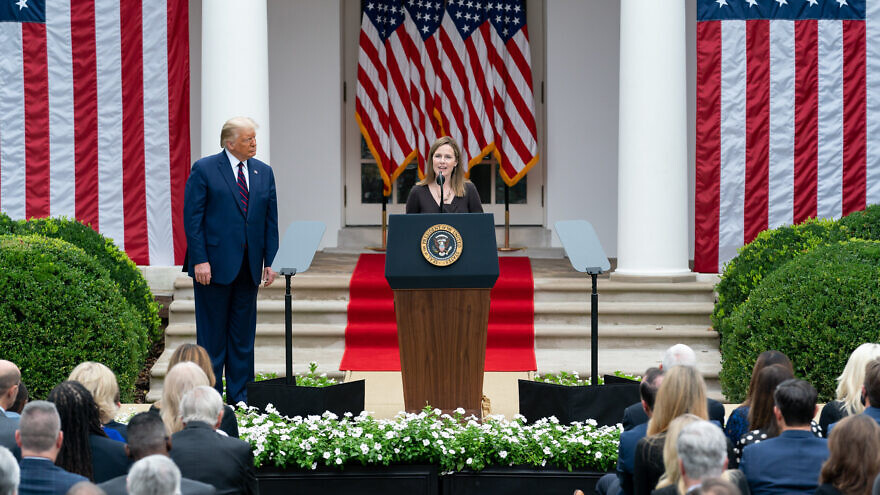 Barrett, previously a judge on the U.S. Seventh Circuit Court and a professor at Notre Dame Law School, her law school alma mater, was confirmed 52-48. All but one Republican, Sen. Susan Collins (R-Maine), voted in favor of her nomination, while all Democrats voted against it.

She succeeds the late Ruth Bader Ginsburg, a heralded liberal judicial, feminist and Jewish icon who was the second woman to serve on the nation’s highest court. Ginsburg died on Sept. 18 at the age of 87 from “complications of metastatic pancreas cancer,” according to a statement from the Supreme Court shortly after her death.

In her opening statement on Oct. 12 in front of the U.S. Senate Judiciary Committee, Barrett paid tribute to Ginsburg.

“When I was 21 years old and just beginning my career, Ruth Bader Ginsburg sat in this seat. She told the Committee, ‘What has become of me could only happen in America,’ ” she said. “I have been nominated to fill Justice Ginsburg’s seat, but no one will ever take her place. I will be forever grateful for the path she marked and the life she led.”

“Amy Coney Barrett is highly qualified, fair-minded and dedicated to the law,” said RJC chairman and former Sen. Norm Coleman (R-Minn.). “President Donald Trump made a wise choice in nominating her, and we are pleased that the Senate moved swiftly to confirm her to the court.”

“Having a full complement of nine justices on the Supreme Court is very important to the smooth and effective working of our constitutional system,” he continued. “The president and the Senate appropriately carried out their duties in putting forward and confirming this nominee.”

The Jewish Coalition for Religious Liberty and its general counsel, Howard Slugh, applauded the confirmation of Barrett.

“This year, the Supreme Court will hear cases that could have a substantial impact on Americans’ religious liberty,” JCRL and Slugh told JNS. “We hope that Justice Barrett brings to those cases the same dedication to the Constitution that she has exhibited in her legal writings, time on the 7th Circuit and at her confirmation hearings.”

Rabbi Aryeh Spero, president of the Conference of Jewish Affairs, told JNS that Barrett’s jurisprudence is to be lauded.

“I approach the Constitution as I do the Torah, as an Originalist. Decisions should be based on and then applied based on the original intent and meaning of the text,” he said. “Both are here to inform and shape our views and decisions, not overlooked and stretched in favor of a particular political agenda or used as a convenient expedient toward pre-determined outcomes.”

Rabbi Dov Fischer, western regional vice president of the Coalition for Jewish Values, told JNS that Barrett “is an exceptionally qualified jurist with a family commitment, lifestyle and value system that should inspire all Americans. Barrett is quite worthy of a seat on the United States Supreme Court.”

The Jewish Democratic Council of America, Democratic Majority for Israel and Bend the Arc: Jewish Action objected to her confirmation, as have Democrats in the U.S. Congress.

“Jewish Dems see the confirmation of Amy Coney Barrett for what it is—a partisan power grab by President Trump and Senate Republicans, which violates the will of the American people, Justice Ginsburg’s dying wish and the standard Republicans set themselves for Supreme Court nominations in a presidential election year,” said JDCA executive director Halie Soifer in a statement. “This confirmation will impact generations of Americans, and it’s a shande—a shame to our democracy and judiciary.”

“Judge Barrett has demonstrated a total disregard for legal precedent on critical issues such as the Affordable Care Act, equality in marriage and reproductive freedom, and her views on the law are far outside the mainstream of public opinion,” continued Soifer. “She has also refused to commit to recusing herself from cases involving an election dispute and may serve as the swing vote on the Court deciding the outcome of our presidential election.”

DMFI president and CEO Mark Mellman told JNS, “With the confirmation of Judge Barrett, President Trump and Republicans come ever closer to achieving their long-desired goals for the Supreme Court: eliminating the Affordable Care Act and its protections for those with preexisting conditions; overturning Roe v. Wade and outlawing all abortions; and undermining democracy by deciding Trump is ‘re-elected,’ regardless of how Americans vote.”

Bend the Arc: Jewish Action Stosh Cotler told JNS, “Amy Coney Barrett’s confirmation represents the culmination of the years-long effort of President Trump and Republican senators to stack our courts with ideologues who are only interested in protecting the rights of people who look and think like them.”

“The GOP Senate that confirmed Barrett actually represents a minority of Americans, and five of the nine current Supreme Court justices have now been appointed by presidents who lost the popular vote,” she continued. “This type of minority rule is fundamentally undemocratic and goes against every ideal our government supposedly stands for.”

Cotler also said, “The rights of millions of women, immigrants, LGBTQ people and people of color are threatened by a Supreme Court that cannot be trusted. The deeply hypocritical actions of Trump and the Republican Senate have nothing to do with guaranteeing equal justice under law, and everything to do with cynically clinging to power.”