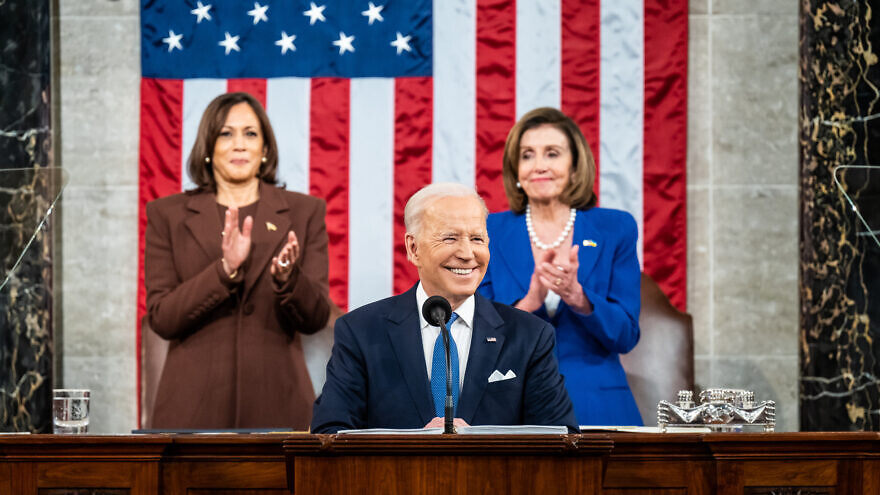 (March 2, 2022 / JNS) Jewish groups and leaders adhered to partisan lines in their responses to President Joe Biden’s first State of the Union address to a joint session of Congress, a speech that mainly focused on domestic policy but began with a rebuke of Russia’s invasion of Ukraine.

The Jewish community’s praise for the president’s agenda included the administration’s support for more funding for police, commitment of additional resources to secure the southern border, efforts to fix the immigration system, reduction of dependence on China through manufacturing in the U.S., and plan to tackle inflation.

“Tonight, President Biden made clear that the State of our Union is strong — against an imperialist Russia, against a global pandemic, and against rising inflation,” said Jewish member of Congress Rep. Brad Schneider (D-Ill.) in a statement. “Through united diplomacy, America is holding [Russian President Vladimir] Putin accountable for his unprovoked war. Through a dedication to development, America experienced record job growth in the last year, outcompeting China and every other economy in the world as we recover from COVID. And with the President’s new plan to combat inflation, we will make more goods in America and bring costs down for families, building a better America.”

Democratic Majority for Israel President and CEO Mark Mellman said that the first 13 months of the Biden presidency have delivered record job growth and economic expansion, while featuring the passage of important legislation such as the American Rescue Plan and the Bipartisan Infrastructure law, as well as the nomination of the first black woman to the Supreme Court.

“We were heartened to hear President Biden’s four-point plan to tackle higher costs, including increasing American-made products, reducing expenses for families, promoting competition, and eliminating barriers to good-paying jobs,” Mellman said in a statement. “These are all vital to fighting inflation.”

“It’s no wonder 7 in 10 Americans say the country is on the wrong track and President Biden’s approval rating continues to plummet to all-time lows,” Markstein said.

Biden’s speech comes as the president is facing one of the lowest approval ratings for a president during his first State of the Union, with 41% of respondents in a recent POLITICO/Morning Consult poll saying they disapprove of his work so far.

The president covered a wide range of topics in his address, though he omitted some important concerns of the Jewish community, mainly Iran and rising anti-Semitism.

Biden began his speech by expressing support for the Ukrainians who for almost a week have been fighting off an invasion by Russian military forces into their sovereign territory. Ukrainian Ambassador to the U.S. Oksana Markarova was a guest at the speech, sitting next to First Lady Jill Biden.

Biden said that Putin badly miscalculated how difficult it would be to get the free world to “bend to his menacing ways,” and that now the free world is holding him accountable.

He announced the closing of American airspace to Russian flights and announced that the U.S. Department of Justice is assembling a dedicated task force to go after the crimes of Russian oligarchs.

Biden announced an agreement between the U.S. and 30 countries to release 60 million barrels of oil from reserves around the world, including 30 million from American reserves, to ease skyrocketing fuel prices resulting from the war. He said that more fuel could be released if needed.

He also highlighted the sanctions that the U.S. and the European Union have put in place to cripple Russia’s economy.

“We are joining with our European allies to find and seize your yachts your luxury apartments your private jets. We are coming for your ill-begotten gains,” Biden said, adding that the U.S. is giving more than $1 billion in direct assistance to Ukraine.

Biden speech did not mention Israel or address ongoing negotiations to re-enter the Joint Comprehensive Plan of Action with Iran, which the administration believes would prevent the Islamic Republic from obtaining nuclear weapons against the objections of Israeli and Arab leaders.

Democratic Majority for Israel’s Mellman said he believes the Biden administration has strengthened America’s international alliances to the point where the U.S. is once again recognized as a “strong leader and reliable partner.”

“We’re proud President Biden demonstrated again tonight his deep commitment to our Democratic values here in the United States — as well as the democratic values we share with our allies around the world,” Mellman said. “His efforts to rebuild and strengthen our alliances following four years of antagonism recently culminated in the united response to Russia’s unprovoked aggression in Ukraine.”

B’nai B’rith International said that Biden’s speechhit on many of the issues the organization works on, and that it will continue monitoring and advising the administration to make sure the goals set out by the president are accomplished. B’nai B’rith also affirmed Biden’s solidarity with Ukraine, noting that the organization and its affiliates in Europe are providing humanitarian aid to Jewish communities in that country.

“This conflict has put into sharp focus the danger of global reliance on Russian gas and oil exports. Energy independence is vital to ensure the United States and its allies do not rely on oil from countries whose interests are not aligned with our own. We must continue to work with our allies to diversify Europe’s energy supply and reduce dependence on Russian energy,” B’nai B’rith said in a statement.

Over the course of the Biden administration so far, the U.S. has increased its imports of crude and refined oil from Russia.

On the domestic front, B’nai B’rith thanked the president for calling for the need for Medicare drug prices to be reduced, and urged the White House and Congress to support legislation that provides more relief to seniors, especially for affordable housing and hearing aids.

Biden vowed to crack down on gun trafficking and ghost guns — guns that could be bought online and made at home with no serial number or way of tracking — and to pass laws creating a universal background check on gun purchases and allowing gun manufacturers to be held liable for crimes committed using their weapons.

He also called for a ban on assault weapons and high-capacity magazines.

“Do you think the deer are wearing Kevlar vests?” Biden ad-libbed during the speech.

B’nai B’rith stated, “Sensible gun reform measures are urgently needed to address the disturbing rise in gun violence and crime across our cities. We worry greatly about the rise in hate crimes against Jewish individuals and institutions and call for increased funding of the Nonprofit Security Grant Program to protect Jewish communities and other vulnerable targets.”