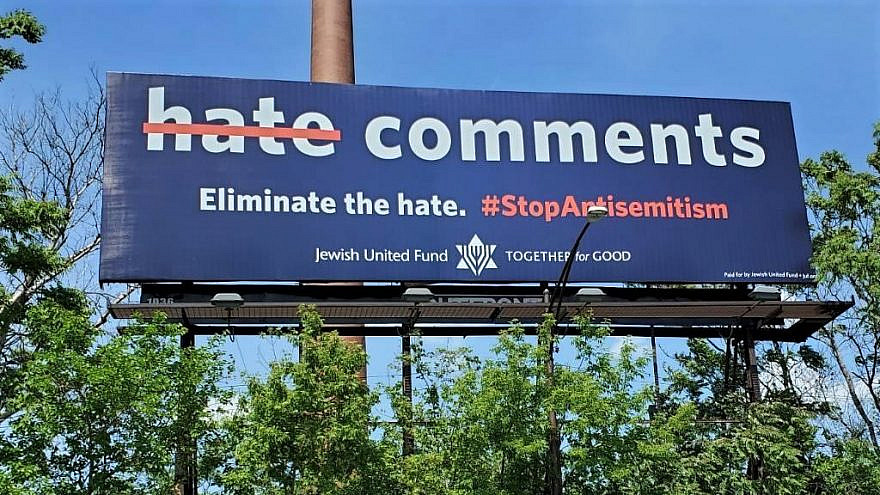 A billboard as part of the “Stop Antisemitism” media campaign in the Chicago area, sponsored by the Jewish United Fund, May 2021. Credit: Courtesy.
Spread the word.
Help JNS grow!
Share now:

(June 14, 2021 / JNS) The Jewish United Fund is taking the fight over anti-Semitism to residents of Chicago and the surrounding suburbs with a major media blitz that included TV ads, billboards, social-media posts and more.

The “Stop Antisemitism” media campaign, which launched in late May, is being undertaken because of the rise of attacks on Jews and Jewish institutions across the country and in Western Europe. During Israel’s conflict with Hamas in Gaza in mid-May, anti-Semitic attacks soared worldwide and continue to be reported on a daily basis.

“The purpose of this is to bring meaningful messaging that is positive and actionable, and to build awareness to stop anti-Semitism and eliminate hate,” said Elizabeth Abrams, assistant vice president of communications for JUF.

JUF chose to use a variety of mediums to reach out to people—both Jewish and non-Jewish—including seven billboards, including three on major expressways leading in and out of the city; a television ad on the local NBC station; full-page ads in the May 30 Sunday edition of the two major daily newspapers, The Chicago Tribune and Chicago Sun-Times; and a social-media campaign on Instagram and Facebook.

“We are using all available avenues from high in the sky billboards to Instagram and everything in between,” said Abrams. “We’ve heard from a lot of people who were moved by the campaign. … It really echoes what people, both Jewish and non-Jewish, feel, they want to come together and eliminate hate, which is really what it is doing.”